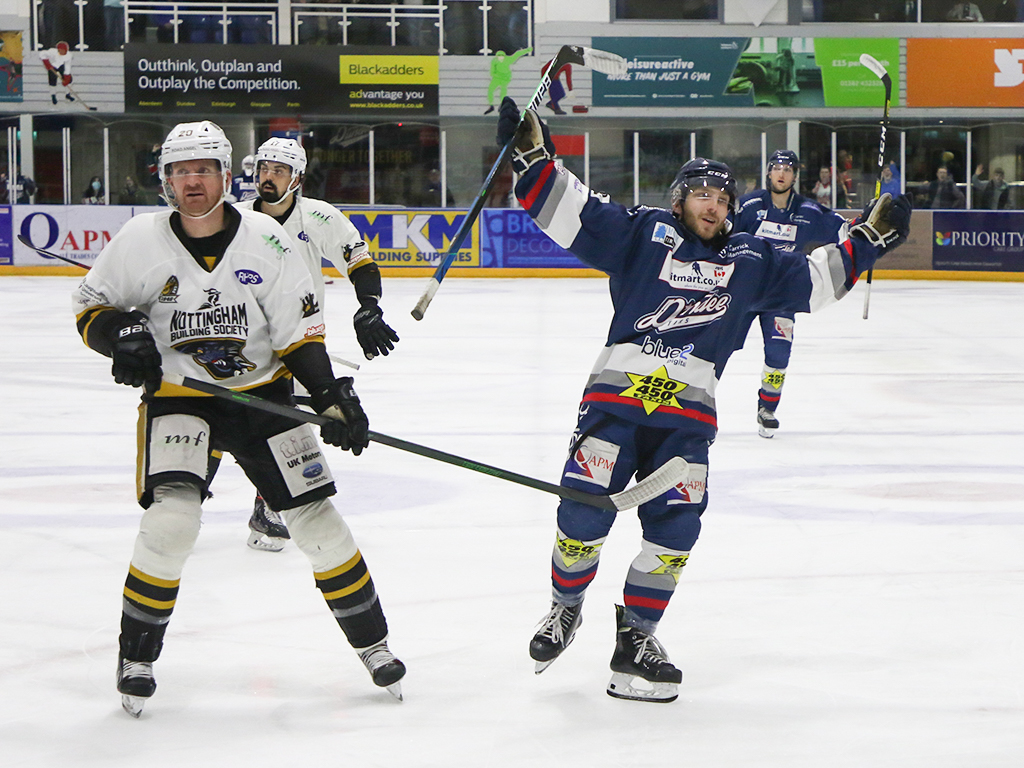 The Kitmart Dundee Stars were back on home ice for the first time in five games and were looking to win two crucial points that could boost their chances of finishing as high as fourth in the Elite League table.

Both teams were missing their usual starting goaltenders but both Brython Preece and Nottingham’s Willian Kerlin have seen plenty action this so far this season.

Despite their long day of travel, the Panthers quickly took the lead after fighting off some early pressure from Dundee and Christophe Boivin was quickest to react to turn in the rebound from J.C. Brassard’s shot from the blueline, on 6 minutes.

However, the Stars swiftly responded and had the game tied through Philippe Sanche just 76 seconds later, but the home team then found their groove and went 2-1 ahead, in the 10th minute.

Dundee’s second goal came from Gabriel Desjardins as he and Alexandre Rangers cut through the Nottingham defence before Desjardins lifted his shot over the left shoulder of Kerlin.

The Canadian then netted once again four minutes later, as he was able to fire home from the doorstep to convert a Stars five-on-three powerplay into a goal.

Omar Pacha’s men then failed to scored on the next two powerplays but increased their lead to 4-1 in the 18th minute, when Dillon Lawrence had time and space to pick out the top corner of Kerlin’s goal.

After 20 minutes, Dundee were well in control and had a chance to take an even take an even tighter stranglehold of the Panthers in the second period and they did just that.

With club captain, Drydn Dow in the box for cross-checking, Lawrence and Spencer Dorowicz turned a mistake by the Panthers into a fifth goal, as Dorowicz knocked the rebound of Lawrence’s shot under Kerlin on 24 minutes.

However, the Tayside team were not satisfied with just a four-goal lead and extended it to five inside 29 minutes, as Ranger, Desjardins and Sanche all exchanged passes in the Panthers end, before Sanche blasted home a cross-ice pass.

Although, a much different Panthers side re-emerged for the third period and with the words of coaches, Mark Matheson and Matthew Myers still ringing in their ears, they cut the lead back to four after only 25 seconds of play through Mathieu Tousignant.

Despite a strong pushback from Nottingham, more penalty trouble caused them to concede another as Charlie Combs then deflected Michael Poirier shot into the net in the 45th minute, but just over a minute later, Jeremy Welsh capitalised on a man advantage for Nottingham to make it 7-3 with 15 minutes to go.

Dundee were not done scoring though and Sebastian Bengtsson added his name to the scoresheet with an easy tap in finish, to complete a scrappy section of play in the 51st minute and round the scoring off at 8-3.

Those two big points have held the Stars in sixth position in the league and closed the gap to fourth place down to four points, with Dundee holding a game in hand over the Panthers.

Next up for the Pacha and the Stars is a double header with their local rivals, Fife Flyers as they head to Kirkcaldy on Saturday, before welcoming Todd Dutiaume’s men to the DIA on Sunday.