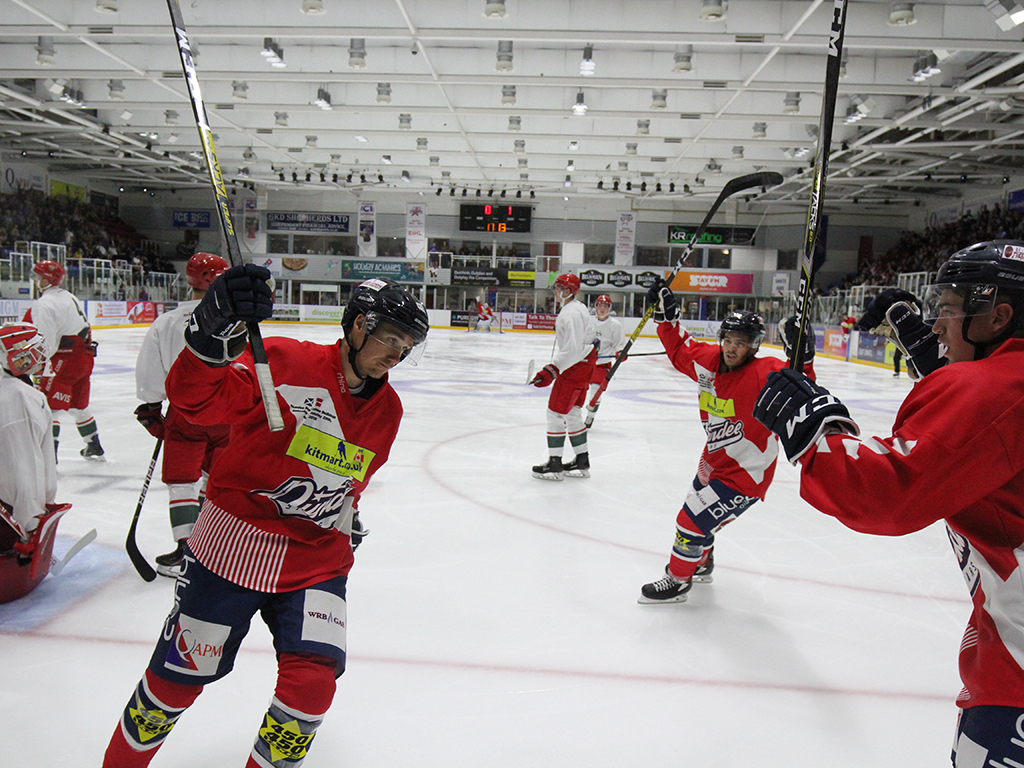 DUFOUR GLAD THAT HAT-TRICKS HELP GET THE WIN

Kitmart Dundee Stars forward, Kevin Dufour was the first player in the squad to reach 25 goals this season and the humble Canadian is just pleased that he has been able to contribute in the team’s important wins.

This Saturday the Stars face off against the Guildford Flames, face off 7.00pm at Dundee Ice Arena. You can buy your tickets HERE! for our 90’s theme night.

Last Sunday down in Guildford, Dufour bagged only his second ever hat-trick at the professional level, with his first coming in the Stars 6-3 victory over in Belfast in the last game of 2019.

Coincidently, his hat-trick goal against the Flames was also his 25th goal of the season and he is the first player to reach that landmark this season.

“It always feels good, you never expect it to happen but when it does it’s a positive for the whole team and I’m glad I could contribute towards two big wins”, said Kevin.

The native of Quebec has scored 18 times in the league and seven more times in the Challenge Cup to give him his quarter of a century total which ranks him as the seventh highest goal scorer in league play.

However, Dufour does not focus on how many goals he scores and simply assesses his own performance on how well he does to create the chances for himself.

He explained: “Honestly, I try not to rate my game on scoring.

“Lately the pucks have been going in, so hopefully they keep going in.”

The left-winger is in his EIHL debut season but is now only 13 goals away from matching the record for the most goals scored in an Elite League season by a Stars player.

Former player, Nico Sacchetti currently holds that record after lighting the lamp 38 times back in the 2013-14 campaign.

The American forward, scored 29 goals in the league and nine more in the cup as the Stars went on to lift the Gardiner Conference trophy.

When asked if he thought he could beat or match the record, Kevin modestly replied: “I don’t know, I don’t really think about that stuff.

“So, if it happens great but if it doesn’t then as long as the team are successful and we can make a push for the playoffs, that’s what’s important.”

Dufour has netted four goals in the last two games and has a chance to continue building a scoring streak this weekend as the Stars face Guildford Flames and Cardiff Devils.

Looking ahead to the weekend’s action, the 27-year-old said: “We know that Guildford are going to come out hard on Saturday, they are probably not happy with the result in the last match.

“So, we have to make sure we play our game at our level and if we do that I think we will give ourselves a good chance to win.

“We know Cardiff are probably one of the best, if not the best team in the league, so we have to go down there and fight through the bus legs after the long travel and hopefully get some points from there.”

Dundee host the Flames on Saturday at the DIA and it is also the special throwback evening as the match will be 90’s themed with special retro jerseys, all the best hits from the 90’s playing all evening and a flashback disco taking place after the game in the big bar.

Saturday’s fixture begins at 7pm and on Sunday, Omar Pacha will take his men south to Cardiff for their clash with the Devils and that game will face-off at 6pm.