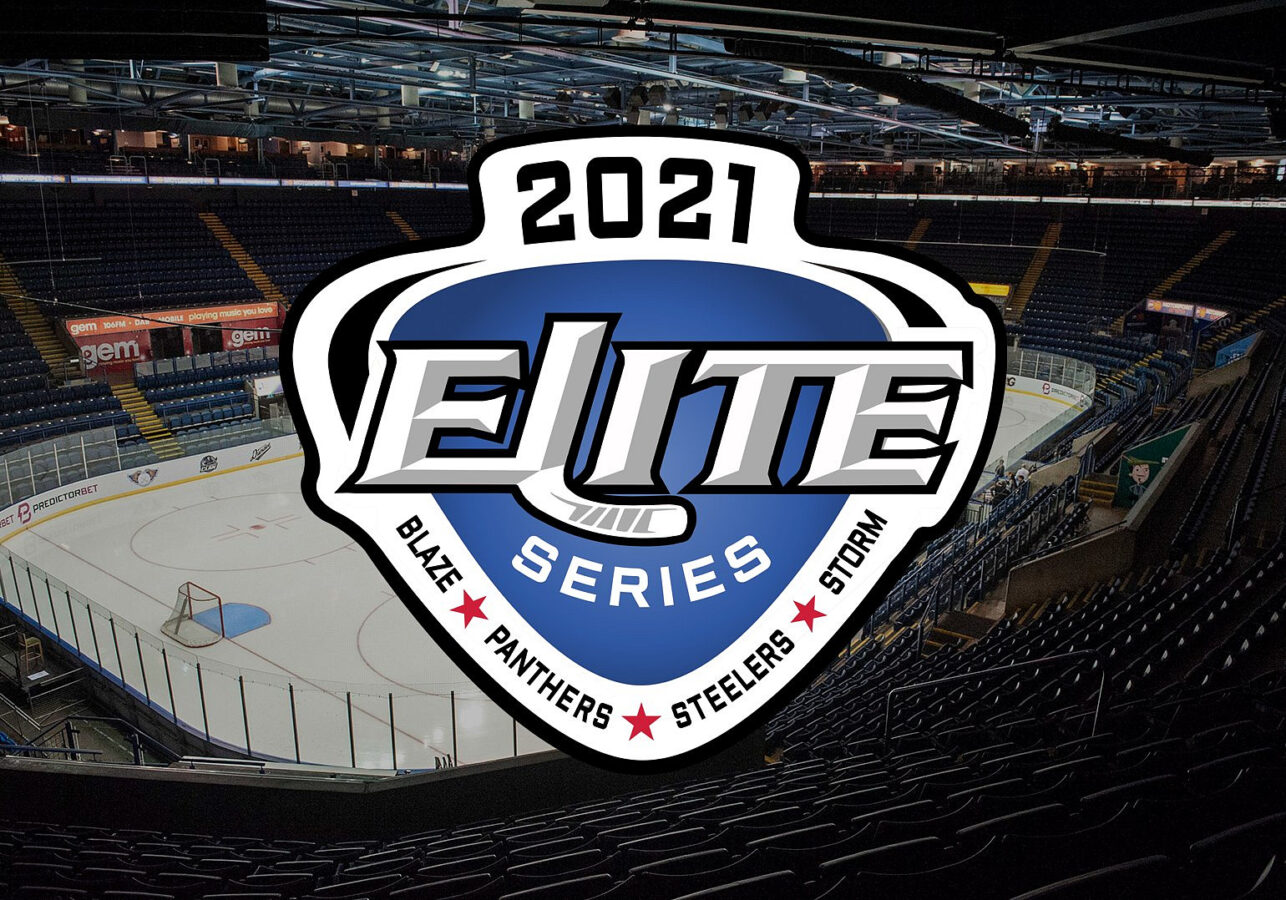 The Semi-Finals of the EIHL’s Elite Series Playoffs concluded last night and after two tightly contested first legs, the second matches saw dominant displays from two sides to secure their place in the Final.

Wednesday night’s second leg was always going to be a tough one to call but not many people would have expected such a clinical performance from the Panthers.

However, it is what they needed to do, in order to protect their 2-0 lead from the first leg but for Coventry, it all started to go wrong from the very first minute.

Austin Cangelosi had his team 1-0 up in the first 25 seconds of the game, as Owen Griffiths stole the puck from the Blaze and headed straight towards goal.

Griffiths then slid across to the back post for a waiting Cangelosi to turn home and that put the Panthers in full control.

Although, Danny Stewart’s side were given a stroke of luck that allowed them to get their first goal of the tie.

On the 13-minute mark, Luke Ferrara’s shot was saved by the catcher of Jackson Whistle but the puck had been stopped by the bottom end of the glove and deflected upwards.

Most players had presumed the puck had went over the goal but Simen Andre Edvardsen was waiting right behind Whistle to knock the dropping puck into the gaping goal.

Despite Coventry having some luck on their side, the Panthers used some strong teamwork to get themselves 2-1 up on the night,

What started with a pass back into their own end, Nottingham them worked the puck forward, slicing their way through the Blaze defences, before Brett Perlini was bearing down on goal with a defender in between him and Kevin Domingue.

Perlini managed to get the puck across to his teammate, beating the attempted block by Paul Swindlehurst and Domingue directed the puck past the sprawling, Shane Owen in the 18th minute.

After a trio of goals in the first period and with Nottingham now holding a 4-1 aggregate advantage, the second session was a bit quieter.

With only one goal being scored in the middle period, it came just after the match passed its halfway mark and it went the way of the Panthers.

Another well-worked move by the Nottinghamshire club resulted in another goal but this time, Nick Dineen’s shot would be deflected by Mark Matheson and saved by Owen, before Griffiths knocked the puck back across goal for Cangelosi to fire home, into a wide open target on 32 minues.

In the third period, Cangelosi would complete his hat-trick and net his fourth of the Semi-Finals but only minutes before, the Blaze would have a goal disallowed after a video review, as in the build-up to the goal, the puck crossed back over the blueline and made the entire play offside.

With just under six minutes to play, Dineen sent a long-range pass through three Coventry players at centre ice and despite a slight deflection off the stick of a Blaze defender, Cangelosi still got onto the end of the pass.

He then controlled the puck before using side-to-side dekes to pull Owen to his right, allowing an easy tap in for his third of the night.

A 4-1 win on the night, gave the Panthers plenty of breathing room as they comfortably advanced to the Final and now have the trophy within their sights.

Wednesday night’s second leg was all about the first goal that would be detrimental in deciding the outcome after Sheffield held a 5-4 lead from Tuesday.

That critical goal came after only three minutes, when Adrian Saxrud Danielsen put Sheffield ahead and gave them a 6-4 aggregate lead.

Then, six minutes later, Alex Graham fired home to double the Steelers lead and quickly give the Storm a steep uphill battle to fight.

By the end of the first period, Tanner Eberle had added a third whilst on the powerplay and that gave the Yorkshire club a four-goal cushion.

However, Manchester set a different tone in the middle period and began by changing netminders as Stephen Murphy replaced Sean Bonar between the pipes.

There new plan seemed to be working as Scott Simmonds bagged a goal on the man advantage to make it 3-1 on the night and 8-5 on aggregate, but just as they looked to be getting somewhere, Sondre Olden answered back on 27 minutes.

Four minutes after restoring their four-goal advantage Joshua Waller then extended it to five with his effort beating Sean Bonar in the Storm net.

In the third period, both sides went full attack, with Sheffield trying to close things out but the battling Manchester side got a goal for their efforts, as Tyson Fawcett converted on a five-on-three powerplay.

Although, 90 seconds after conceding and whilst still a man down, Eberle netted his second of the evening with a shorthanded effort on 50 minutes to make it 6-2, but the Storm also hit back straight away as Fawcett beat John Muse again, three minutes after his first.

It was then the turn of the Steelers to play on the powerplay and that allowed Odlen to net his second of the night in the 53rd minute and Jeremy Beaudry would close out the scoring with his strike on 54 minutes.

Aaron Fox’s side were 8-3 winners on the night but cruised through to the final by 13 goals to 7.

Game 1 of the Elite Series Playoffs takes place at 7pm on Saturday night and is the first in a best of three series.

Game 2 is on Sunday evening at the same time and if Game 3 is required, it will be played on Monday at 7pm.

After such a dominant season and finish to the Semi-Finals, Sheffield will be considered the favourites but the Panthers recent upturn in form and comfortable beating of the Blaze means they are more than capable of beating the Steelers.

The Story So Far 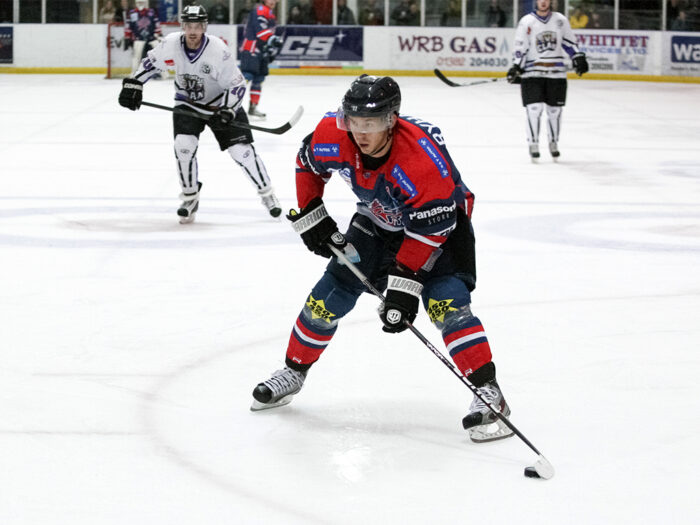 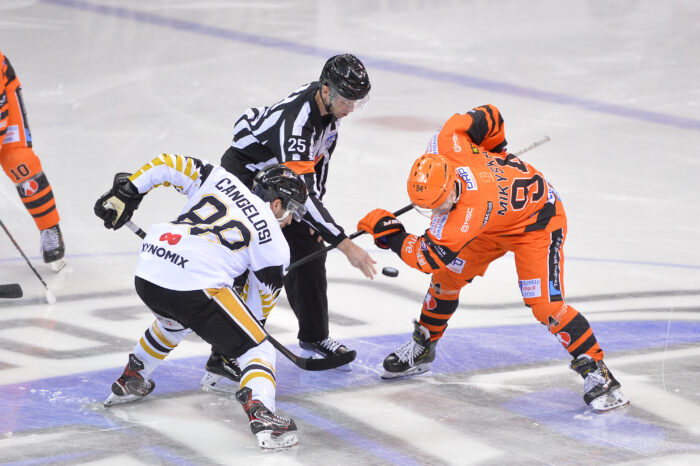 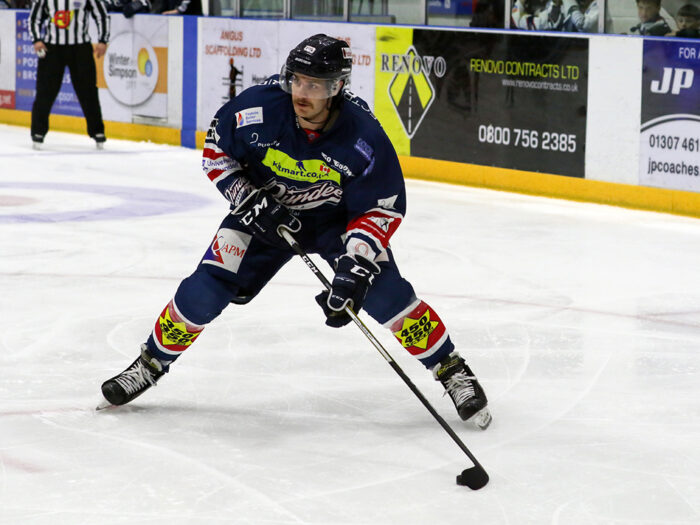 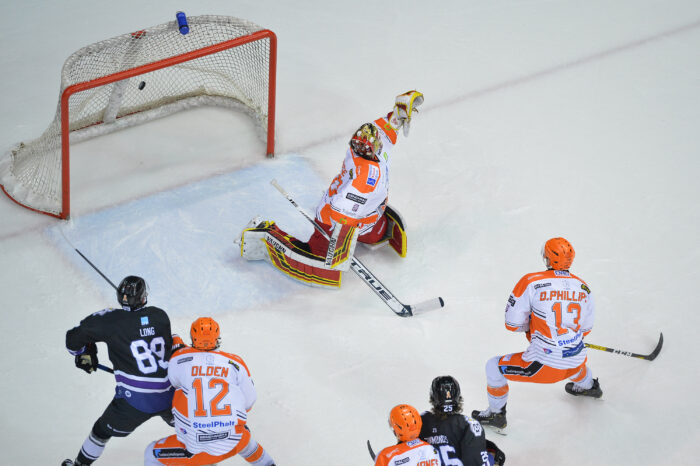 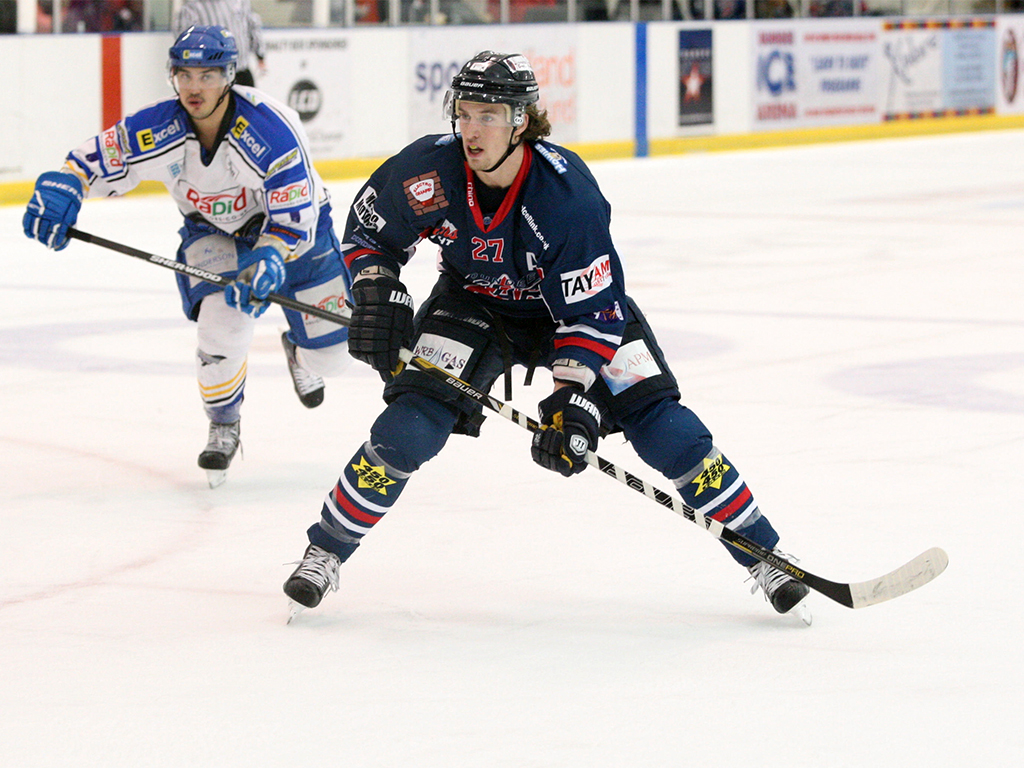 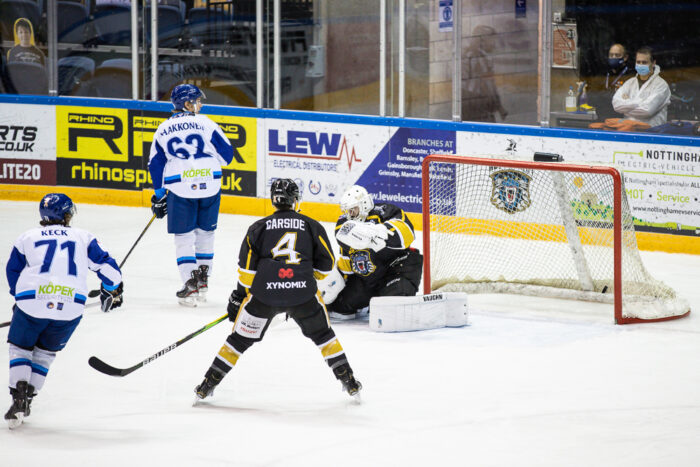 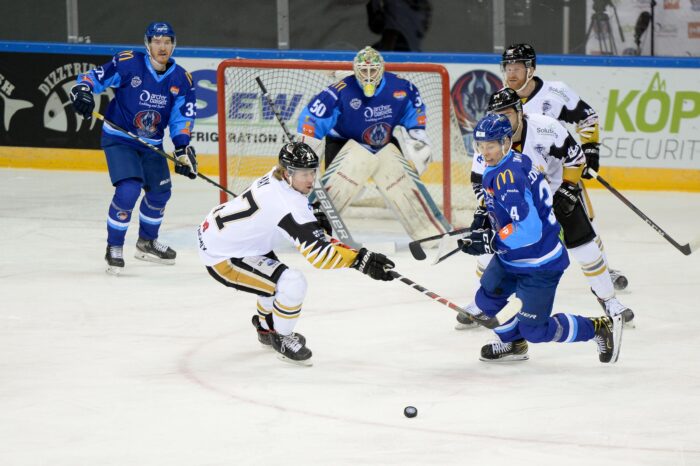 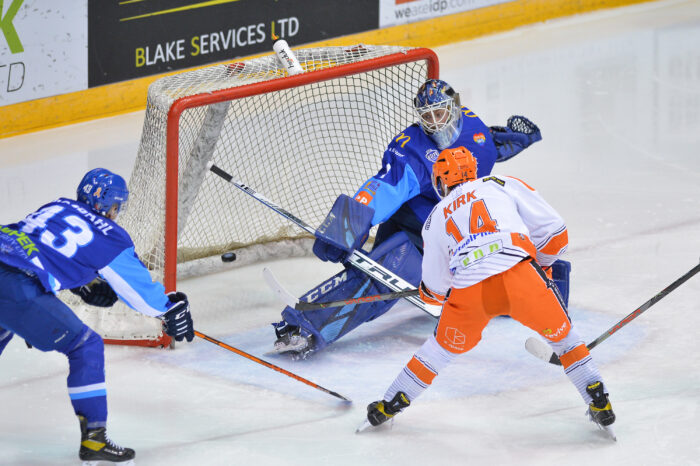 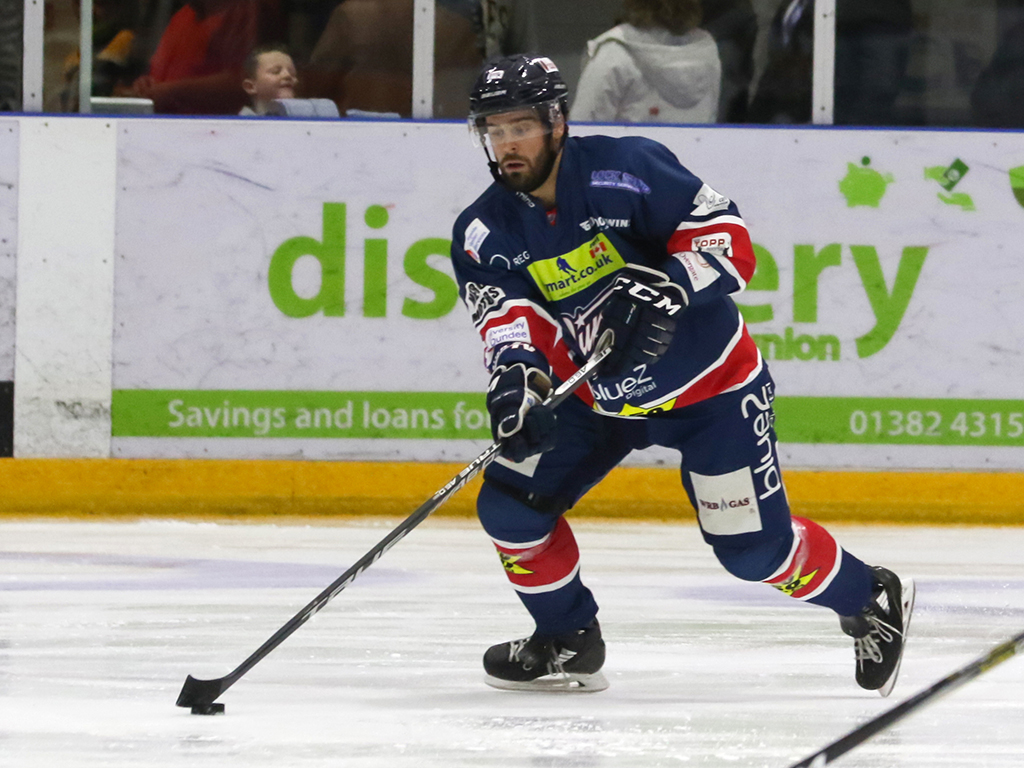