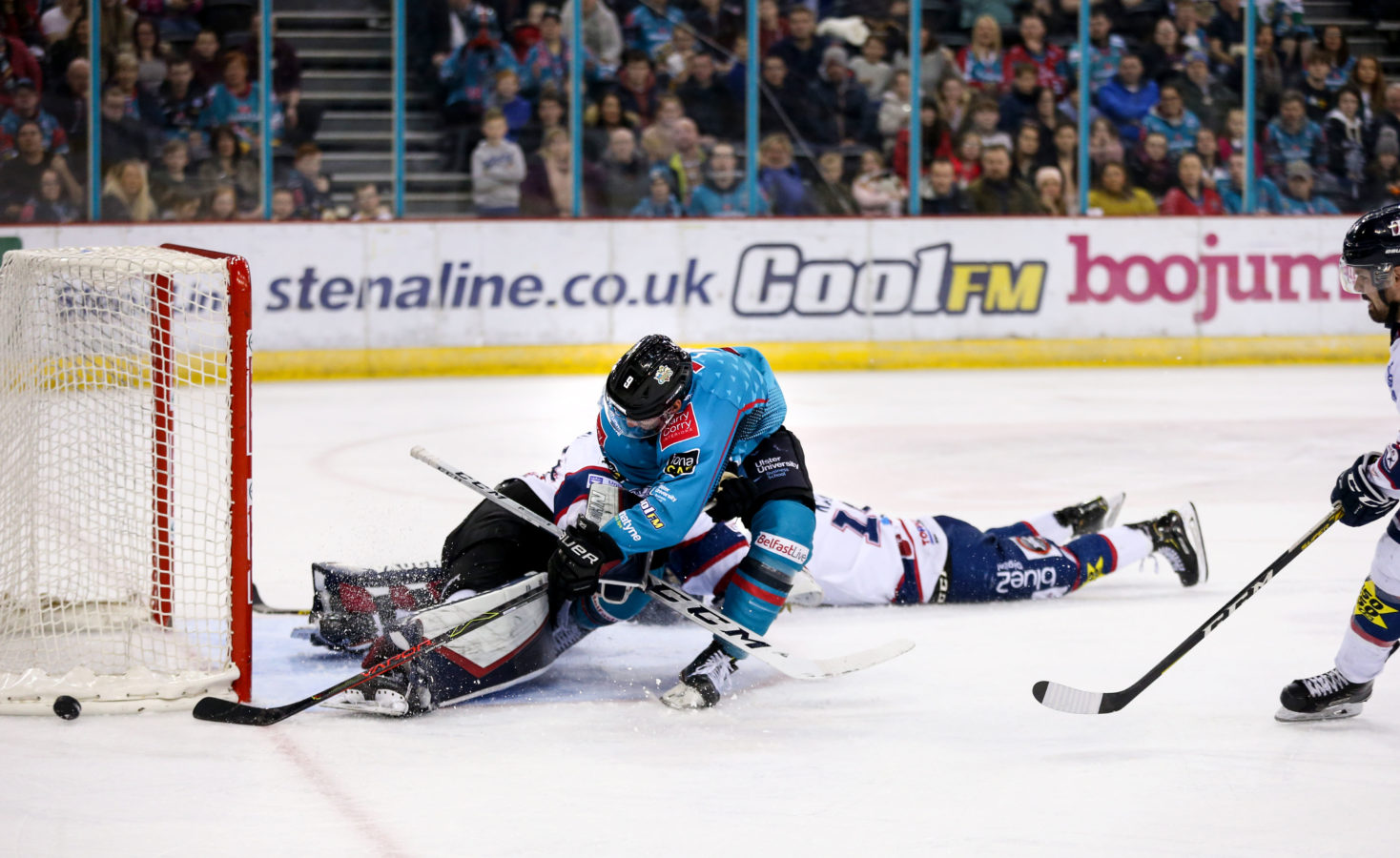 A full-strength Kitmart Dundee Stars started off well in Belfast on Saturday night as they set up defensively and withstood the pressure the home team applied during the opening minutes.

Dundee were looking to force the Giants into some early mistakes but Belfast were comfortable on their own ice.

Adam Keefe’s men were creating most of the attacking chances but all their shots were coming from distance and that gave the Stars netminder, Alex Leclerc, plenty of time to track the puck.

After playing half of the first period, there had been no change in the style of play but Dundee were edging closer with their counter attacks.

Although, Belfast’s defence were doing well to stop any shots getting through to Shane Owen.

The match began to show just how close this game was as many gritty board battles broke out with both teams fighting extremely hard for possession.

Then just as the Tayside team began to pose a real threat to the Giants, Dundee took the lead.

Drydn Dow saw his first shot saved by the blocker of Owen but the rebound came straight back to the Stars defenseman and he sent his second effort over the right shoulder of the Belfast goalie to make it 1-0 after 15 minutes.

Omar Pacha’s men held onto their lead until the first break but the Northern Irish side came out with an attacking mindset again and hit their opponents hard in the opening minutes.

The Giants found some luck when a big scramble in front of the Dundee net saw Leclerc make a few vital saves before the puck was lost under a pile of bodies.

Leclerc lay on the ice with the hopes of the puck being under his body, however Belfast’s Brian Ward located the puck behind the net and fed a pass to Mark Garside who was sitting high at the top of the Dundee zone.

Garside then fired a hard slapshot that beat Leclerc as he tried to recover in the 23rd minute.

After that, the Stars goalie went straight back into top form and he denied plenty of shots as the Giants created a lot of momentum from their equalising goal.

Despite this, the Scottish club were still creating plenty of opportunities from counter attacking and they came close to re-taking the lead when there was then a scramble in front of the home net.

Although, before the puck was found, a Belfast player slid across the goal to protect his net but knocked it off the pegs in doing so, resulting in a stoppage of play.

The Stars were then on the receiving end of the night’s first penalty which was called just after the halfway mark in the match because Justin Maylan was caught hooking his opponent.

Dundee survived the two-minute penalty but Leclerc was by far their best penalty-killer, mainly because of his great stop to prevent Liam Reddox from scoring.

Reddox skated across the Stars net but the Canadian stuck with him and got his pad across to stop the Belfast forward’s effort from sneaking in.

Leclerc continued to be the key man in the game as he denied many more difficult shots and his side were given some relief from the relentless waves of Giants’ attacks when Curtis Leonard was sent to the penalty box for tripping in the 38th minute.

However, this gave Stars the chance they needed to restore their lead and it was Anthony Beauregard who fired the fatal shot.

Just over a minute into the powerplay, the small Canadian forward drilled a shot through the traffic in front of Owen’s net from the top of the right face-off circle and it flew straight into the back of the goal.

Pacha’s side were back in the driving seat and managed to draw another penalty in the final minute as Curtis Hamilton was punished for a hooking infraction with 24 seconds left in the second stanza.

Dundee would take advantage of that foul in the opening minute of the third period as they added another powerplay goal.

This time the Stars had worked the puck down low to the Giants goal line and from there Kevin Dufour sent a pass to Elgin Pearce.

Pearce was standing at the back post of the home team’s net and he had enough room to get a shot between Owen and the post after just 57 seconds of play in the period.

Moments later, former Star, Paul Swindlehurst headed for the Belfast dressing room and he did not return after sustaining what appeared to be a lower body injury.

There was then a chance for the Giants to respond as Dow was penalised for high-sticking in the 47th minute but a fine defensive display from Dundee followed and they held onto their two-goal lead.

Next, Ben Lake had a crucial chance to get Keefe’s side back within one goal when he was played in behind the Stars defence but Leclerc was still in incredible form and tracked Lake for long enough to force him wide and to take a late shot that he struggled to get on target.

The Stars keeper continued to deny all the Giants’ efforts and frustrated them for the rest of the evening.

The next victim of Leclerc’s tormenting performance was Jordan Smotherman as he had two great chances in quick succession but he saw both bounce off the Dundee shot-stopper.

With three minutes to play, Keefe pulled Owen on to the bench and put an extra attacker on the ice but despite the man advantage, Dundee continued to dictate the play.

The Stars had multiple chances to finish the game off with an empty net goal but their long-range efforts could not hit the open target.

The Giants’ coach then used his timeout with just over a minute left but after the restart, Matt Marquardt fought off the defensive efforts of Smotherman to slide the puck into the vacant goal with just 18 seconds left.

However, Bobby Farnham added an extremely late consolation goal as he tucked home the rebound of Kevin Raine’s shot to make it 4-2 with just 1.6 seconds to play.

Another win in the SSE Arena adds another two points to Dundee’s points tally and gives them a big boost in confidence and momentum ahead of next Friday’s massive Challenge Cup Quarter-Final first leg against Glasgow Clan, who were beaten 6-4 by Fife Flyers.