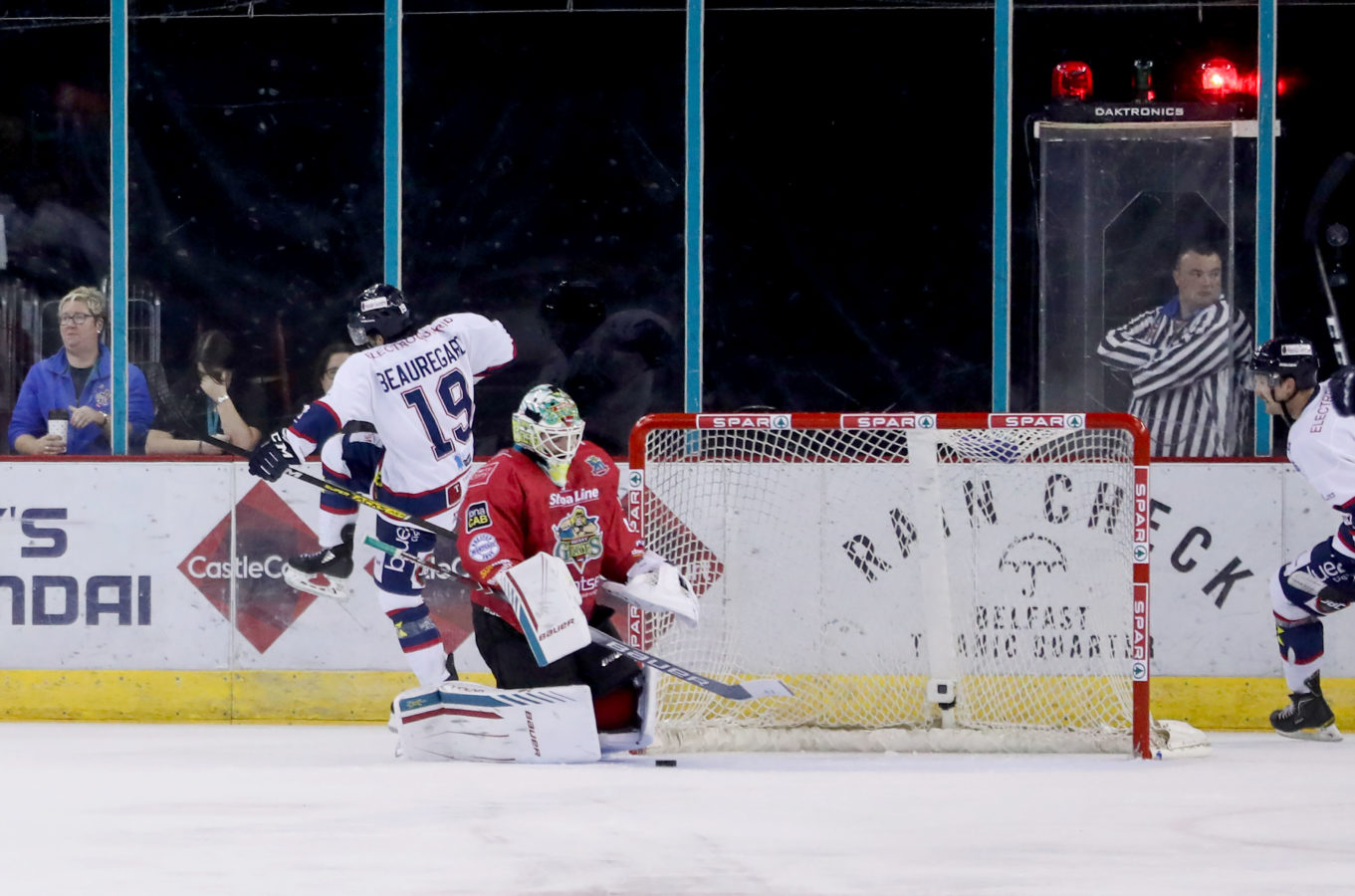 The Kitmart Dundee Stars travelled across to Northern Ireland without two of their defensemen and were ready to put up a fight against the reigning Challenge Cup and Elite League champions.

The Stars held firm in the opening minutes of the Challenge Cup Group A match and were quickly presented with a powerplay chance as Belfast Giants’ Brian Ward was sent to the box for slashing after just two minutes of play.

However, Belfast killed off the penalty before having a man advantage of their own, with Duncan Speirs also being called for slashing.

The Stars seen off the minor penalty as well as a second slashing penalty against Jordan Cownie in the 10th minute.

The Giants had most of the chances but Dundee were holding firm to deny them and goaltender Alex Leclerc was playing an absolute blinder.

Although the short-benched Stars were under pressure they were still creating plenty of their own scoring opportunities.

Stars head coach, Omar Pacha would have been concerned to see another penalty called against his side as Drydn Dow was boxed for tripping after 12 minutes.

However, the Canadian coach was left smiling as Kevin Dufour put Dundee ahead with a shorthanded goal in the 14th minute.

Dufour and Elgin Pearce made a quick exit form their defensive zone and pressed the Giants back into their own end before Pearce sent a pass through to an unmarked Dufour.

He then pulled Belfast keeper, Shane Owen from left to right across his goal and sent the puck through the netminder’s legs.

After the restart, Adam Keefe seen his team’s man advantage wiped out as Bobby Farnham was boxed for tripping.

The rest of the period saw Dundee continue to put on a solid display against a powerful Giants side and they held their lead going into the first intermission.

The second stanza saw the home team come out hard and push for an equaliser but Leclerc and his defence continued to get in front of every shot.

Belfast were given an early chance to draw level as the Stars captain was called for a slashing foul in the 25th minute but Dundee’s defence picked up right where they left off and continued a solid display.

After killing the penalty off, the Tayside team were put under heavy pressure for a long period of time but Leclerc would not stop frustrating the Giants attackers.

However, after over 30 shots, the Northern Irish side finally found a way past Leclerc.

Curtis Hamilton tied the game with a quick effort through the five-hole of the Stars goaltender on 30 minutes.

Dundee would have been disappointed to lose a lead they had done so well to defend, even whilst short benched but it did not have an effect on their work ethic.

In fact, the Stars would retake the lead in the 37th minute as Dufour beat Owen again.

The Canadian forward sped past the Giants defence and quickly sent the puck high over the glove of Owen to restore Dundee’s lead on the powerplay.

Although, Belfast would not be behind for long as they were able to tie the game again in just 41 seconds.

Patryk Wronka sent a pass from behind the Stars goal to Ben Lake, who was waiting out in front and the Belfast marksman, swiftly sent the puck across into the far corner.

With more penalties called in the final minute of the second session, both teams would start the third period with four skaters and tied at 2-2.

Both teams played rather cautiously with more space on the ice and once they returned to full strength, both sides were back out there looking for a winner.

Dundee had the first chance to get back in front and it was magnificent one that deserved more.

After a turnover on the Dundee blueline, Pearce burst forward and flew past everyone and as he went one-on-one with Owen, he then released a quick shot that was aimed at the glove side of Owen but the Belfast netminder pulled off a remarkable save to deny him.

However, the visitors would eventually get back in front and it was from another breakaway opportunity.

Anthony Beauregard was in all alone and slowed down at the last second to create space between him and a sprawling Owen before calmly slotting the puck into the goal in the 52nd minute.

The Giants coach threw everything forward as his side were in desperate need of a goal.

Even with Dundee a man down as Cownie was sent to the sin bin inside the final three minutes, Keefe using his timeout and pulling his goalkeeper, they were again blanked by the Stars penalty killing unit.

Nevertheless, before the penalty had expired, Beauregard made it 4-2 with a long-range shot from inside his own defensive zone that found the twine, with just over 90 seconds to play.

The home team were not finished yet and would still recover a goal with 17 seconds left as Brian Ward’s shot slipped through the grasp of Leclerc and bobbled across the line to make it 4-3.

Pacha’s men held on to claim the 4-3 win and will be delighted to take another road victory and two points to strength their pole position in Group A.

Alex Leclerc was named ‘Man of the Match’ after stopping 65 of the 68 shots he faced, while the Stars showed their killer scoring touch with four goals from just 18 shots on target.

Tickets on sale now for our next home game versus Manchester Storm, buy them HERE!