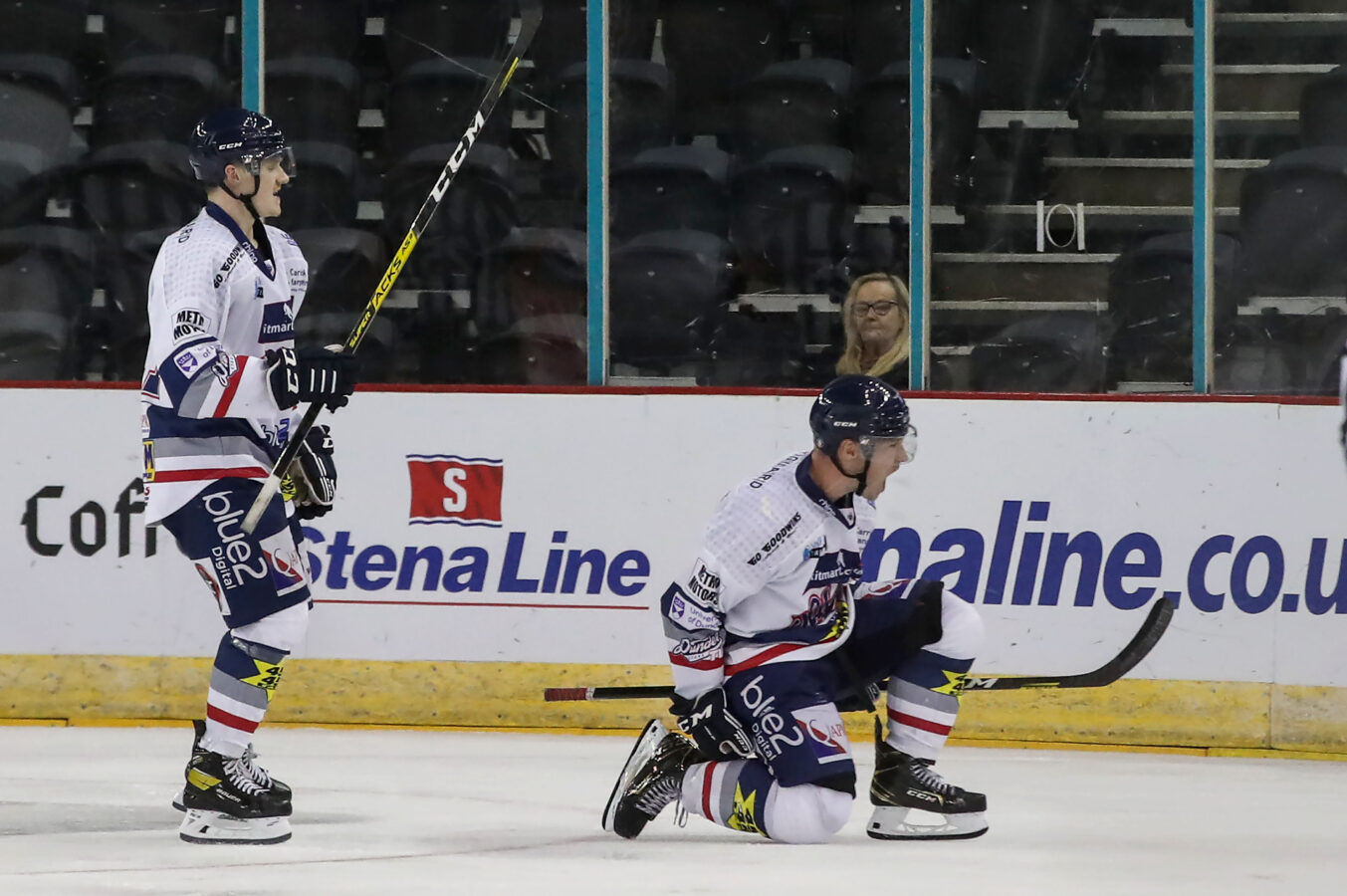 The Kitmart Dundee Stars came back from a goal down three times and took the Belfast Giants all the way to penalties in Northern Ireland, as they claimed a well-earned point on the road.

The home side made a very quick start and put the Stars straight onto the back foot with some early pressure and it swiftly paid off.

Belfast’s Mark Cooper was given possession in a dangerous area and chose to send his shot across goal, only for it to hit the back of Giants forward, Tyler Soy and fall into the Dundee net, after three minutes of play.

However, 11 seconds later, the Stars replied straight from the restart.

Swedish forward, Sebastian Bengtsson took the puck straight forward from the face-off and set up teammate, Gabriel Desjardins for a shot on goal and his low effort bounced off the underside of netminder, Jackson Whistle’s glove and into the Giants net to tie the game.

Although, the Northern Irish side then produced an instant response of their own, as David Goodwin lifted a loose rebound off the sprawling glove of Adam Morrison, on four minutes.

The game then settled down briefly, before both teams took the puck back and forth, with neither side able to create long periods of sustained pressure.

There were a few key chances for each club but the biggest opportunity of all fell to Dundee captain, Drydn Dow, as he broke away from everyone else and got a shot away on Whistle, but the British goaltender easily denied the Canadian with his blocker.

After that, the final five minutes of the opening period saw the physical side of the game emerge and the two teams begin to be penalised for their roughness.

However, no more goals would be scored before the first 20 minutes expired.

In the second session, the Giants again started the better of the two teams but they also failed to make another powerplay chance count.

Although, the Stars then forced the home team to take some penalties too, as they got themselves into some dangerous positions and drew the fouls, but they failed to make their man advantages count.

Dundee dominated the majority of the middle session, but heading into the final period of regulation, Adam Keefe’s men were still clinging on to their one-goal lead.

Omar Pacha would have been delighted to see his team go straight out and tie the game in just 27 seconds, as Connor Sills sent a rising shot over the shoulder of the Belfast goalie.

Although, once again, there would be a fast reply, as three minutes later, Scott Conway restored the home side’s lead with a shot driven in at Morrison’s near post.

Just as Dundee seemed to have their heavy momentum stolen away, they continued to battle hard and press the Giants into their own end and eventually they found a third equaliser of the night.

Charlie Combs moved the puck down the left flank for the Stars and spotted an unmarked Desjardins in front of goal, the American quickly slung a pass across to his linemate, who rifled the puck past a stretching Whistle, on 46 minutes.

After making it a 3-3 game, the Scottish side were on top for a while and continued to put the home team under pressure, however, even when the Giants got their chances, both goaltenders were performing at their highest ability.

With no way past the keepers, the game was forced into overtime and a deserving point was guaranteed to each side.

Neither team was able to get a big break as such, during the three-on-three overtime period, but the only notable chance was when Dundee lost Alexandre Ranger for two minutes after he was caught slashing his opponent.

Therefore, the match would have to be settled by penalty shots and Belfast would take the first shot.

Slater Doggett failed to find a way past Morrison, before Sills suffered the same fate. Belfast’s Cam Knight would also miss the target in round two, while Desjardins was denied a third goal of the evening.

In round three, Scott Conway bagged his brace with a tidy backhand finish to give the Giants the advantage and Dillon Lawrence saw the glove of Whistle deny his effort.

In round four, both Ben Lake and Dundee’s Combs were also unsuccessful, before Morrison stopped Goodwin’s shot, leaving the crucial game-saving shot down to Stars’ Sebastian Bengtsson.

The Swede failed to find the twine and Belfast claimed the extra point, leaving the Stars with one hard-earned point to take home.

Now, Pacha must prepare his team for next weekend’s league clash against Guildford Flames in Dundee, before heading to Kirkcaldy to face the Flyers in another Challenge Cup contest.

You can buy tickets for our next home game HERE!