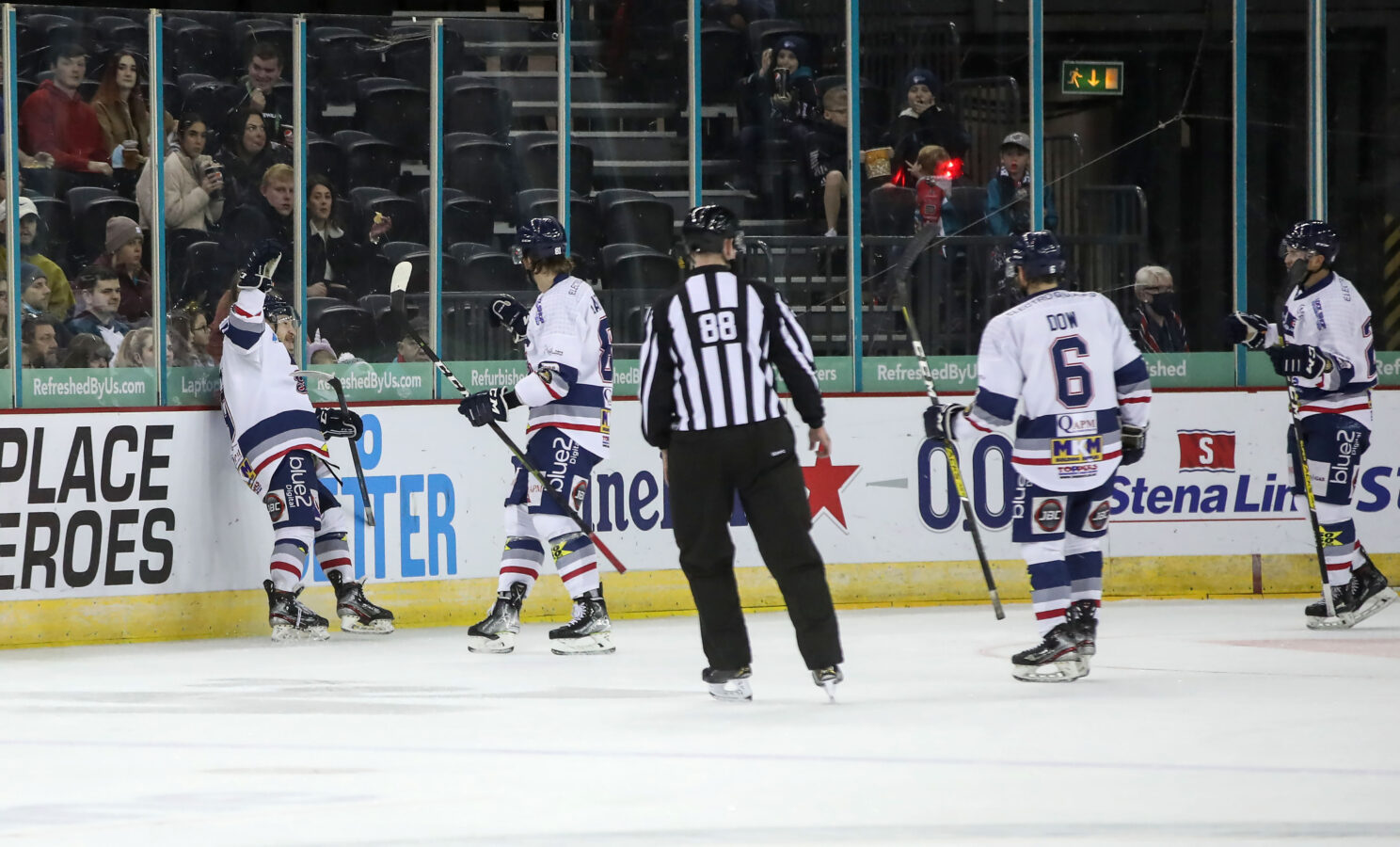 The Kitmart Dundee Stars claimed a massively important 3-2 win over the Giants in Belfast on Sunday night to complete a four-point weekend.

The Stars arrived in Northern Ireland off the back of a 3-2 victory against Manchester Storm on Saturday evening and they went straight onto the front foot against the Giants.

Inside the opening minutes, there was a breakaway chance for Dundee’s Connor Sills, whilst his team were down a player but Belfast’s Jackson Whistle produced a strong save to stop the Stars taking an early lead.

However, the British shot-stopper was called into an action again just moments later, as he had to make a double save to keep the efforts of Dillon Lawrence and Drydn Dow out, as the Dundee pair had a two-on-one break.

The Scottish side would continue to have the better chances through the first period and once Ben Lake was in the Giants penalty box for a hooking foul in the 17th minute, the deadlock was finally broken.

A well-worked passing move by the Stars saw the puck switch from one side of the ice to other, as Gabriel Desjardins pass found Charlie Combs and the American unleashed a first-time shot that flew past Whistle to send the visitors ahead.

Omar Pacha’s men were still in front by a lone goal to start the second period but had a few penalties to kill off throughout the middle period.

Although, eventually Belfast would find a way to tie the game-up and just after a two-man advantage had ended for the home side, Ciaran Long was able to slip his shot through the grasp of Adam Morrison on 36 minutes.

The two teams were still on level terms to begin the third period, but penalties would again prove pivotal, as the Stars found another go-ahead-goal on the powerplay.

With Long and Scott Conway taking hooking penalties 20 seconds apart, Dundee were gifted a five-on-three advantage and on the 45-minute mark, Sills deflected Combs’ shot past Whistle to make it 2-1.

The tempo was soon raised by both teams as they each searched for the decisive next goal and almost 10 minutes, later it came.

After Dundee won possession along the boards, Sills chipped the puck forward for Philippe Sanche who carried the Stars attack forward into the Belfast end, before passing to Dow.

The Stars captain then drove towards the net and released a backhanded shot from close range that slipped past the Giants goalie at his far post.

With Dundee now 3-1 ahead and only five minutes left on the clock, they had to continue their excellent defensive display and that they did, even whilst losing players to penalties.

Inside the dying minutes. Jordan Boucher would net a consolation powerplay goal to make things a little tighter for the final 90 seconds, as the home side had a five-on-three powerplay.

Dundee were punished for having too-many men on the ice and an accidental high-stick, but the Giants quickly gained a sixth attacker as Adam Keefe swapped out his goaltender, to give them a two-to-one advantage over every player.

After a long period of sustained pressure, this paid off for Belfast and Boucher was able to net the rebound of a shot that came back off the goalframe, in the middle of a goalmouth stramash.

Although, the Stars stayed strong and held on to secure the two points and their first road win in Belfast this season.

With a crucial four points secured this weekend, Pacha now turns his side’s focus onto making it three wins on the bounce against Nottingham Panthers at home next Saturday.