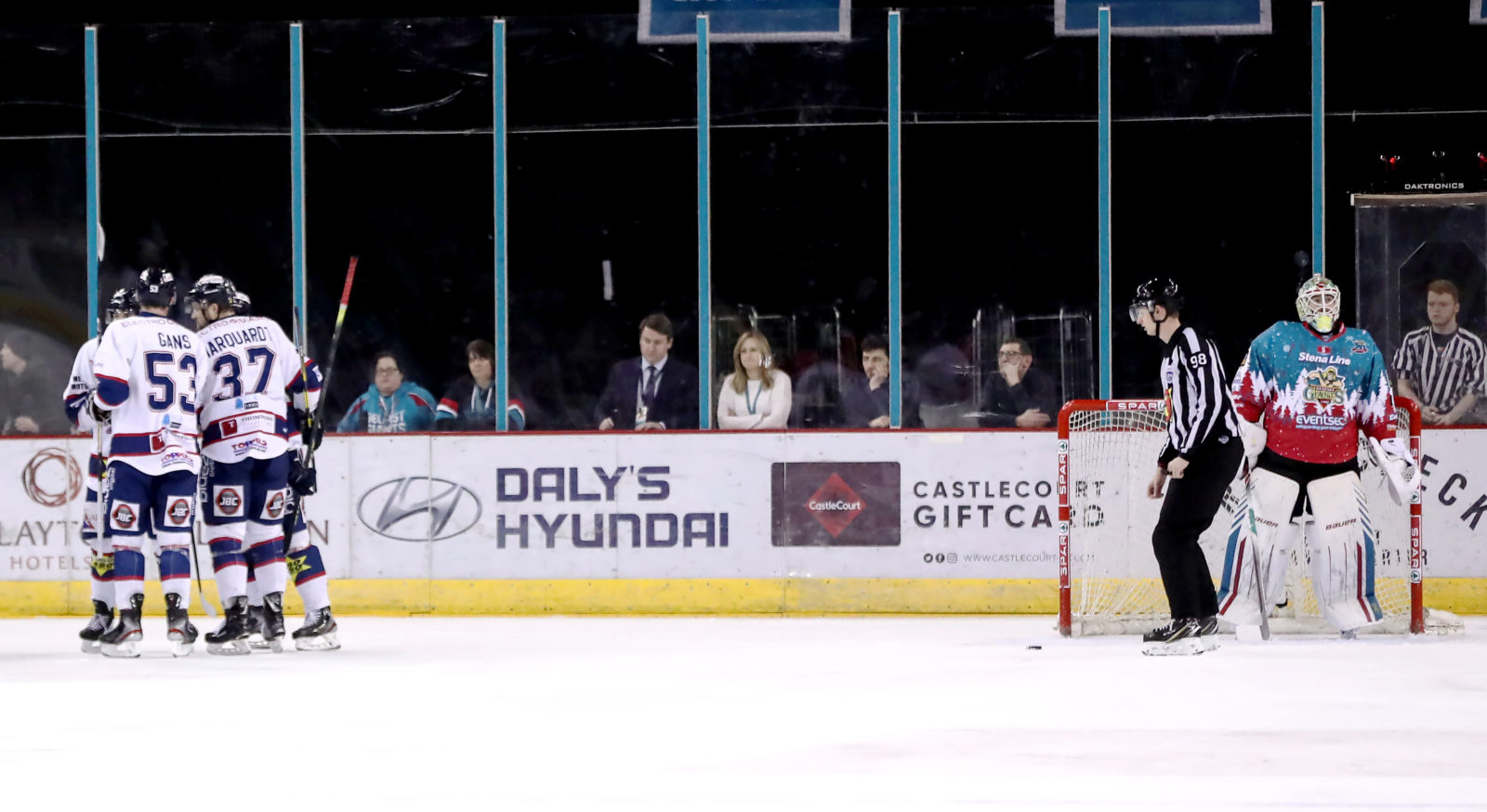 The Kitmart Dundee Stars ended 2019 on a high as they made it three wins on the bounce and they claimed their third win of the season at the home of Belfast Giants with a 6-3 victory.

There was a lot of early pressure from Belfast in the first few minutes and they finally cracked the Stars defence after just five minutes.

David Goodwin took possession of the puck and skated towards the Dundee net before fooling Stars netminder, Alex Leclerc and he slipped the puck under the stretching goalie on the five-minute mark.

The Stars forward had gone close to scoring but drew a penalty on the play as he was hooked by Curtis Leonard.

However, the Tayside team held possession and created another chance which Dufour converted into an equaliser, as he released a backhanded shot that was partially stopped by Shane Owen, Dufour got a second touch on the rebound as he skated past and that was enough to turn it into the net.

The first penalty of the game then came against Dundee as their captain, Matt Marquardt was punished for a slashing foul in the ninth minute the Giants got close to re taking the lead as they hit the crossbar twice.

Once the Stars were back at full strength, they found a second way past Owen and got themselves in front after 13 minutes.

Matt Carter continued his blistering start to life as a Star as he netted his third goal in just his fifth appearance for Dundee.

Carter skated on to a rebound and quickly fired a shot across the body of Owen and it found the first piece of netting just inside the left post.

Omar Pacha’s men held their lead going into the first break but the Northern Irish club wasted no time in tying the game in the second period.

Belfast’s Liam Reddox played a quick pass in front to Bobby Farnham who was standing on the doorstep of the Dundee goal and Farnham managed to get the puck under the Stars goalie as he had to jam it across the line to tie the game at 2-2.

The action went from end to end for the next 10 minutes with both sides looking dangerous but then the Stars picked up another penalty and the momentum swung in favour of the home team.

After their man advantage ended, the Giants continued to pile the pressure on Dundee and it eventually paid off as Reddox sent a cross ice pass to the left wing, where Patrick Mullen blasted the puck back towards goal and his shot beat Leclerc to the top corner in the 34th minute.

However, two late penalties proved costly for Adam Keefe’s side as their 3-2 lead vanished at the hands of Colton Kroeker.

Just as the final minute of the second session approached, Carter had possession behind the Belfast goal and sent a pass out in front to the approaching Kroeker, who hit the puck first-time and it flew straight past Owen to tie the match once again.

The third period was full of scoring opportunities and most were created by the away team as the Stars pushed to regain the lead.

Their first chance was in the 43rd minute as goal scorer Dufour raced in behind the Belfast defence but he could not beat Owen with his backhanded effort.

The Scottish side were handed another powerplay when Farnham was punished for a tripping foul on 48 minutes and the Stars were able to strike again on the man advantage.

This time it was their captain who scored the goal that put them back in front as Matt Marquardt sneaked a wrist shot between the body and arm of Owen after 50 minutes.

The Giants had a chance to respond straight away as Craig Gans was sent to the sin bin for a hooking foul but an impressive penalty kill by Dundee repelled the home sides advances.

Another penalty against the Irish side allowed Pacha’s men to rundown the clock before Keefe went all in and swapped his goalkeeper for an extra attacker with two and a half minutes to play.

Dundee fended off the Giants until the final minute and with 54 seconds on the clock, Dufour netted his second to seal the Stars third straight win.

Dufour slid home the puck from the halfway line and 31 seconds later, he completed his hat-trick after chasing down a loose puck, cutting back behind the chasing defenders and finishing into the empty net again.

The Stars rounded off 2019 with another stylish performance in the Northern Irish capital and took their season record to three wins out of four in Belfast.

Stars now the face the Giants in their first game of 2020 as the two teams square off again on Thursday January 2nd, at Dundee Ice Arena, face-off 5.00pm. Buy your tickets NOW!