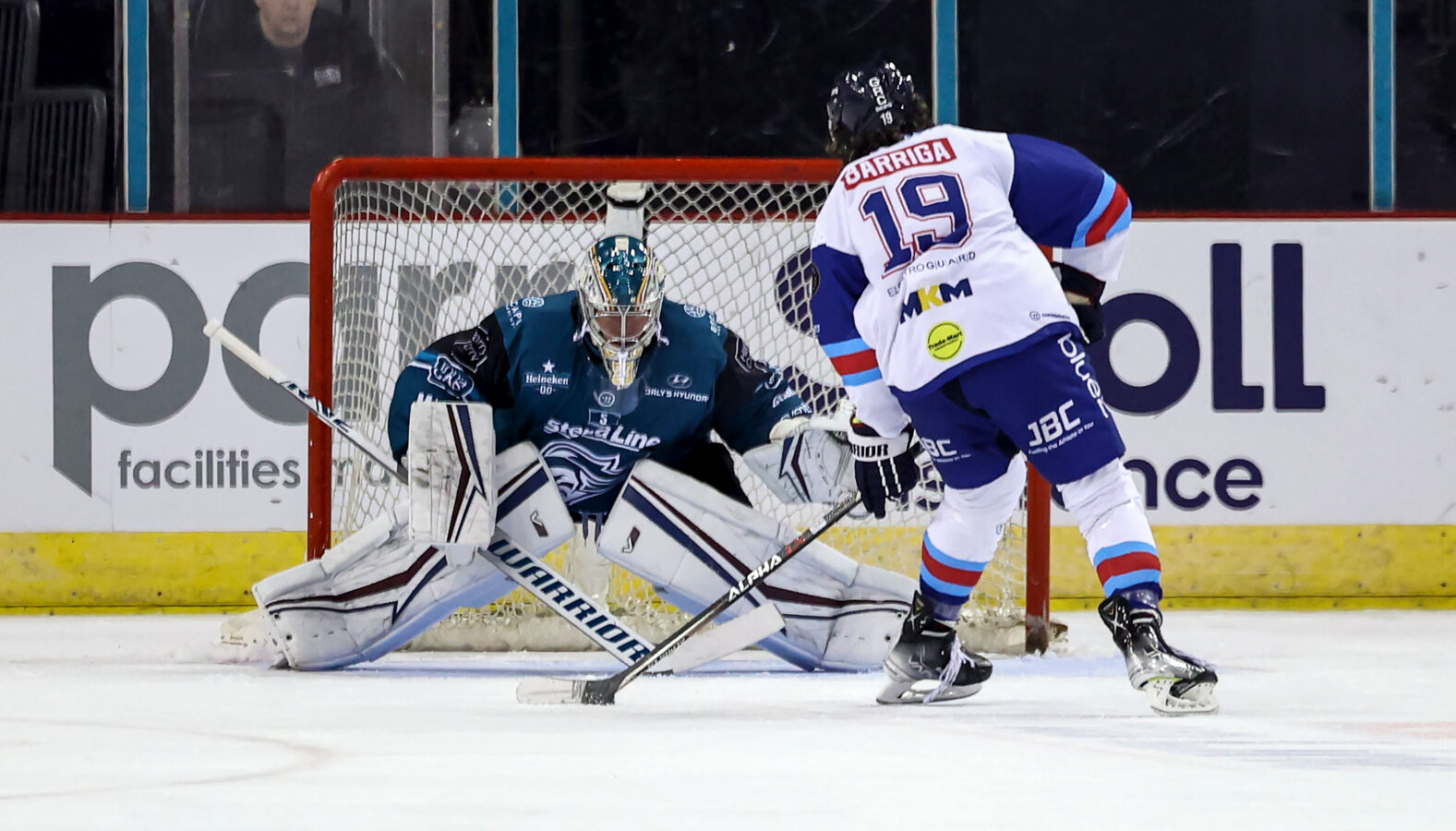 The Trade-Mart Dundee Stars were in Belfast on Saturday night for their first competitive test against the Giants and in their penultimate Challenge Cup fixture, they faced a tough battle against the current cup holders.

The Stars were playing without four players, as Ben Brown fulfilled his two-way contract with Dundee Comets and Ben Sokay, Craig Garrigan and Kris Inglis all battled their way back from injury.

Belfast nearly had the perfect start as inside the opening 90 seconds, a dodgy bounce of the puck caught Stars goalie, Anton Svensson off guard and out of position, but the Swedish netminder recovered just in time to beat away the incoming shot.

Then on the four-minute mark, Giants forward, Gabe Bast saw his shot denied by the Dundee goalpost, but the home side did not stop applying the pressure and soon had an opportunity with the man advantage, as Dundee’s Mac Howlett was penalised for tripping.

However, Jeff Mason’s men stood strong and Svensson kept producing timely saves to keep the game scoreless, but that was only until a combination of skill and luck saw Scott Conway put Belfast in front first.

The Giants forward rushed in on goal with the puck and after it slipped too far in front, he thought the chance was gone but to his surprise it evaded to Dundee defenders and Conway quickly latched back onto the puck and lifted it over the shoulder of Svensson from the edge of the crease.

That early goal shook up the Stars and they soon started pinning the hosts back into their own end and would find the equaliser on 13 minutes, through Romans Semjonovs.

Dundee defender, Drydn Dow kept a broken play alive by firing the puck in behind the Giants goal, where Philippe Sanche was able to dig it out from a bundle of bodies and the Canadian turned and teed up Semjonovs, who was waiting on the doorstep to smash it past Peyton Jones.

The Tayside Team then had their own powerplay chance just moments later but could not create their first lead of the night and the opening period ended with both teams still not separated.

The second session quickly saw that change though, as Dundee went in front after only 18 seconds of play and Sanche was on hand to push home Barriga’s saved effort, after Jones had denied the American’s attempt on a breakaway.

Adam Keefe’s men then wasted a man advantage and opportunity to get back on level terms, but they would tie the score at 2-2 just moments after killing off a penalty of their own.

Netting the Giants second was Ciaran Long, as he evaded a block from Barriga before rapidly rifling his shot into the top corner of the Dundee net, on the halfway mark.

Tensions soon began to flare between the two sides as they continually looked to be very evenly matched and in the 36th minute, an aggravated Long fouled Barriga as he went in on goal and that won the Stars a penalty shot.

The Stars winger took his penalty at a slow pace and patiently waited for his opportunity to shoot over the left shoulder of the Belfast keeper, putting the road team back in front.

Dundee held their narrow lead through until the third period and that was when the Giants constantly provided a response to the Stars excellent performance.

After failing to capitalise on another powerplay, Belfast once again tied the game and this time David Gilbert was on hand to fire home at the back post, after 44 minutes, but Sanche provided a swift response for the Stars, as he took a turnover in his own end, all the way down the ice and buried the puck past Jones.

With Dundee leading 4-3 and only 10 minutes remaining in the match, the home team needed to find another goal and no one would have expected it to come so quickly, after falling behind again.

Just 31 seconds after the Stars went ahead, Mark Cooper was the fastest to react to a loose rebound and he pulled it from behind the Stars net, before turning it home to tie the match for a fourth time.

Both sets of players then fought a gritty and tough battle for the remainder of regulation time, which after it expired guaranteed a point per team, but after less than two minutes of the overtime period, a winner was decided.

Belfast’s Gilbert got his second of the night, as Bast found his teammate with time and space in front of the Dundee net and Gilbert beat Svensson with a quick release and rising shot, that found the top right corner.

A point in the SSE Arena is one massive positive for the Stars but they can also be proud of a performance where they matched and even topped at times, the performance of the Giants.

Now, the two teams set sail for Scotland will fight it out again in the City of Discovery on Sunday, with the Stars looking all but guaranteed a spot in the final eight of the Challenge Cup.