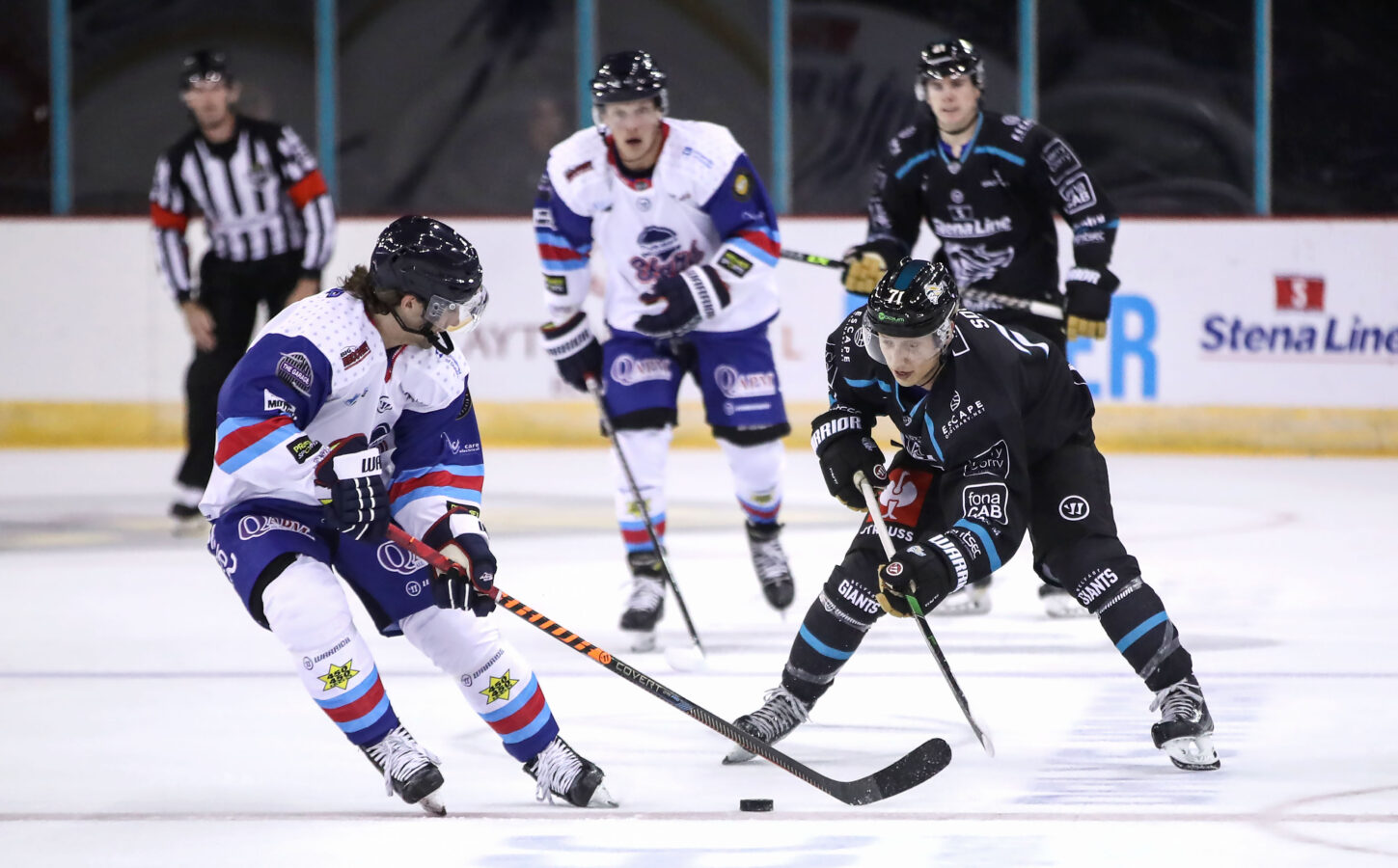 The Trade-Mart Dundee Stars took to the ice for the first time this season as they went up against Belfast Giants in a preseason contest at the SSE Arena.

This was not the Giants first test during their preseason camp as they battled with Cardiff Devils twice last weekend, but Dundee arrived willing to put up a fight against last year’s Elite League and Challenge Cup winners, despite missing two of their import players.

Dundee Head Coach, Jeff Mason made his return to North Ireland and was warmly welcomed back by the fans in Belfast, but he quickly saw his team put under pressure.

However, the Stars shut down the Giants early on and even had a powerplay chance after less than two minutes were played, as Ben Lake was punished for delaying the game.

The home team survived the brief stint with only four skaters and quickly transitioned up the ice to open the scoring on six minutes, as Ben Lake picked out the top corner of the Stars net, from in the middle of the slot.

That early goal really lit the fires inside Belfast and within five minutes, they were 4-0 ahead as David Gilbert fired in a second, high over the glove of Brython Preece on nine minutes.

Then, 42 seconds later, Jeff Baum picked out the top right corner for a third Giants goal and Tyler Soy watched his effort slip through the grasp of Preece to make it 4-0 in the 11th minute.

Although between the third and fourth goals, new signing Ryan Verrier had tried to light a spark in his team as the Dundee defender dropped the gloves with Belfast’s Scott Conway with the pair landing a few punches, before tussling to the ice.

The Tayside team eventually saw a response as Swedish forward, Romans Semjonovs fired a quick wrist shot from way out on the left wing that flew into the top right corner of Peyton Jones net, on 12 minutes.

Adam Keefe’s men responded with a fifth goal as Conway tucked home on a breakaway in the 16th minute, but just 33 seconds later, Dundee’s Philippe Sanche sped towards the Giants goal and tucked his low shot past Jones at his near post, to cut the lead back down to three goals.

The first buzzer of the night brought an end to a chaotic 20 minutes of scoring and the second period would be the complete opposite as both teams found their feet defensively.

It took 15 minutes of play in the middle stanza for the next goal to come but the puck soon found its way into the Giants net for a third time, as Hugo Reinhardt tucked home a loose puck to convert on the powerplay for Dundee.

Although, another quick response followed as Gabe Bast squeezed his shot past the Stars goalie, 60 seconds to make it 6-3 to Belfast.

The third period then saw the home team push further ahead as David Goodwin slipped a shot through Preece’s five-hole on 47 minutes, to extent their lead to four again.

Moments later, Lake found some luck as the puck dropped out of mid-air and in front of his stick, as he skated in behind the Dundee defence and he then netted his second goal, inside 50 minutes.

Dundee’s Semjonovs then provided another response for the visitors as he finished off a lovely passing move to add another powerplay marker and the Stars fourth goal of the night, in the 55th minute.

Semjonovs, Sanche and Elijiah Barriga worked the puck between themselves to switch possession from one side to the other and that allowed the Swede to shoot into a gaping goal, as Jones was sprawling to get across.

The scoring was not complete there as Belfast added one more goal to make it 9-4 and this time Ciaran Long used a backhanded shot to beat Preece, whilst the Giants were shorthanded and with less than four minutes to play.

Belfast tasted victory on their home ice but these two sides meet again tomorrow in Dundee and there are no guarantees of a similar outcome.