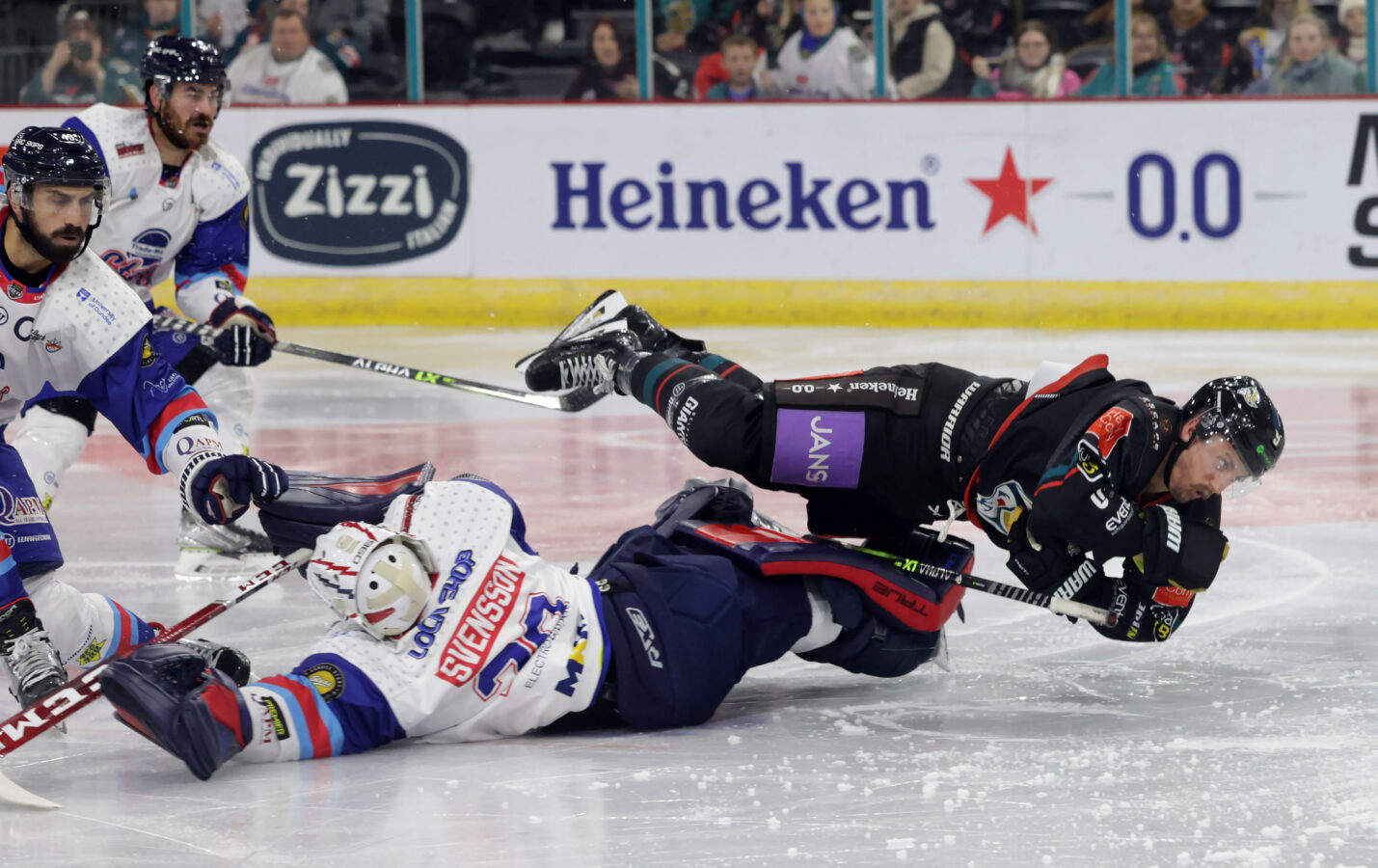 Carter Folk 59:27
2 Abuse of an Official
OT
No penalties

The Trade-Mart Dundee Stars put up a tough fight but were beaten on penalty shots by Belfast Giants, on Wednesday night in Northern Ireland.

The Stars continued to play with a short-bench as forward, Philippe Sanche and Hugo Reinhardt were ruled out of the mid-week clash due to injury and joined defenseman, Colin Joe and spare goaltender, Brython Preece on the sidelines.

It was not an energetic start to the match as both teams settled in and tried to feel out each other’s game plans, as the first period had a more physical style to it, than fast-paced end-to-end scoring action.

Eventually the opening goal of the night was scored in 12th minute and it went to the hosts, but it also could have went either way after an fairly even start, yet Matt Foley was left unmarked on the opposite wing and fired Belfast into the lead.

The Giants defender used the available space on the right wing to get in behind Dundee’s defence and took David Goodwin’s cross-ice pass before beating the moving, Anton Svensson in the Stars net.

The heavy physical play continued and there was a short scrap between Dundee’s Ryan Verrier and Mark Cooper, after the Dundee blueliner hit, Giants Captain, David Goodwin into the boards, but both players were on the ice after only a few seconds.

There would be a few more scoring chances in the first period, but the Giants would retain their narrow lead heading into the second.

However, the home team quickly found themselves in some penalty trouble as they were punished for two minor fouls in the first minute, after the restart.

With Dundee holding a two-man advantage. they were pressuring the Giants heavily for an equaliser, but almost fell two-goals behind as Ben Lake skated through on a shorthanded breakaway and was taken out by the on-rushing Svensson.

The Swedish goalie slid forward, stacking his pads and forced Lake to shoot-wide, before wiping out the Giants forward and the referees would award Belfast a penalty shot.

Despite his second chance to find the net, Lake was still unable to double his side’s lead as Svensson saved his effort and at the other end, Ben Sokay would shoot home a rebound at the back post of Peyton Jones’ goal to tie the score at 1-1, in the 23rd minute.

Adam Keefe’s men then had their own chance to reply with a powerplay goal and they would find another go-ahead-goal, but just after the Dundee penalty expired.

With Carter Folk being released from the sin bin after serving his goaltender interference penalty, Belfast’s Gabe Bast would take the puck from the top of the left circle, towards the middle and fire a quick wrist shot that found its way into the top corner, on 27 minutes.

Although, another pair of penalties against the Giants would allow Jeff Mason’s men to equalise once again, as Sokay netted another at the back post, in the 34th minute.

Belfast would then waste another powerplay chance and failed to take the lead before the end of the second period, but they did gain an uninterrupted five-minute powerplay as Stars defender, Erik Näslund was thrown out of the game after colliding knee-on-knee with the Giants’ Scott Conway.

The Tayside team grouped together though and fought their way through the five minutes, emerging back into a 2-2 game with 16 minutes left in regulation time.

The Stars pushed for a winner but could not find a way to get in front, even whilst killing off another penalty late in the game and eventually overtime was required to try and find a possible winner.

With one point secured, Dundee did not look content and had the best opportunities in extra time to win the second point, as Sokay, Elijiah Barriga and Fabrizio Ricci all went close to netting the game-winner, but Jones and his goalframe had kept their Scottish opponents out.

Penalty shots were next as a shootout would have to decide who would get the extra point and after Lake and Chad Butcher scored on the Giants first two attempts, Belfast keeper, Jones would deny Sokay, Romans Semjonovs, Barriga and Ricci to win the game for the Northern Irish club.

Another point gives the Stars a total of two from a possible four at the SSE Arena this season and their strong performance is certainly a positive indicator ahead of this Saturday’s home game against league leaders, Guildford Flames.