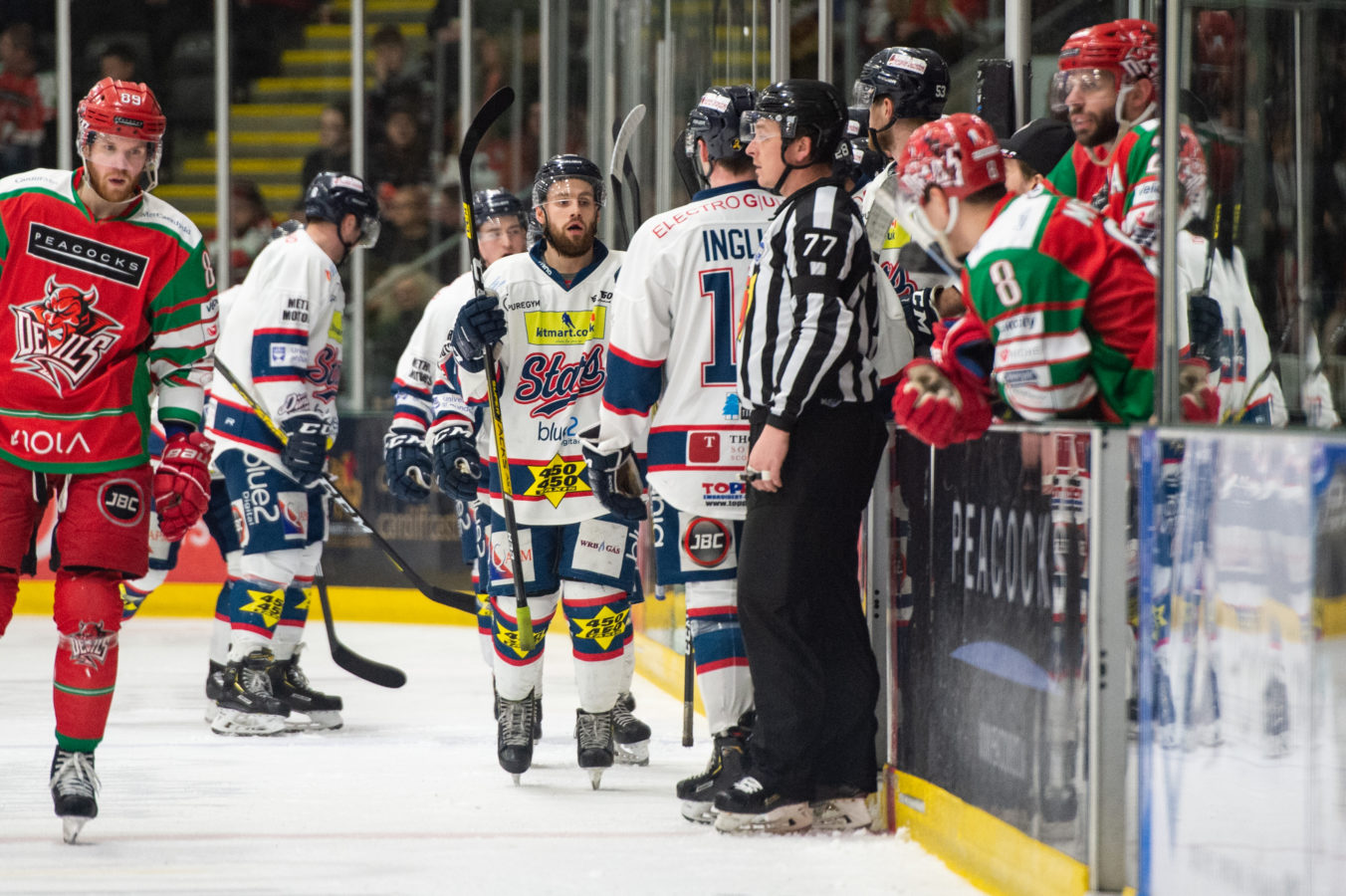 The Kitmart Dundee Stars made the long journey south to Cardiff on Sunday night for their last road game against the Devils in the regular season.

Early on, there was a few chances for either side and the opening goal came inside the first three minutes.

Cardiff’s Joey Haddad jammed the puck past a sliding block from defender, Craig Gans before he got a pass across to Charles Linglet and the Devils winger just beat the moving Stars goaltender, Alex Leclerc with a high finish.

Dundee showed some fightback to try and tie the game up but they lost another goal as Linglet netted his second of the evening after six minutes.

Shaone Morriosonn played Linglet through on a breakaway and as he approached Leclerc, he pulled the puck onto his backhand before sending a shot back across the body of the Stars keeper and into bottom left corner.

A few moments later, the Devils marksman could have had his hat-trick but he instead passed to Haddad and his teammate’s shot was stopped by the trailing leg of Leclerc.

Halfway through the opening period, Dundee finally found a breakthrough, as Anthony Beauregard put them back to within one.

Gans chipped the puck forward to the on-rushing Beauregard and from the face-off dot in the right circle, he fired a shot in off the far post.

Andrew Lord’s men nearly responded straight away as Blair Riley’s shot struck the crossbar but seconds later, he found himself in the sin bin for an elbowing foul on Dundee’ Craig Garrigan in the 13th minute.

There were a lot of chances for the Stars on the powerplay but the Devils killed the penalty and as did the Tayside team, as Egils Kalns committed a slashing foul, just after their man advantaged ended.

The visitors were pushing for an equaliser late in the period and were handed a golden chance as another powerplay was awarded after  Morriosonn was caught holding on to the Stars captain, Matt Marquardt.

The home team still led going into the second session but Dundee had nearly half of their powerplay left on the clock to begin the middle stanza.

The Welsh club killed off the remaining time on the penalty and despite the Stars getting forward, the Devils went 3-1 ahead in the 27th minute.

Gleason Fournier drove towards the Dundee net and once on the edge of the crease, he fired a shot that slipped through the grasp of Leclerc.

Omar Pacha’s men went straight back on the powerplay after conceding but failed to score whilst on the man advantage.

However, a few minutes after it ended, Egils Kalns cut the Devils lead to one, as he followed up on his own rebound and chipped up the loose puck before batting it into the top right corner in the 34th minute.

A five-on-three powerplay followed for the road team as Cardiff’s Sean Bentivoglio and Morriosonn picked up penalties at the same time.

There were so many chances for the Stars but the home side did just enough to protect their lead and that gave them enough momentum to add a fourth goal, once they were back to full strength.

A defensive error from Dundee, saw a pass hit their own goal frame and Devils’ danger man, Joey Martin picked up the loose puck, then waited out Leclerc and sent it high into the net on 37 minutes.

Pacha’s men still trailed by two going into the third period but Linglet swiftly got his third to complete the hat-trick after 44 minutes.

Although, Linglet had attempted to play the puck in front for Haddad but his pass was blocked by Beauregard and unluckily for the Stars forward, deflected into his own net.

Beauregard almost turned his fortunes around, as he tried to finish off a rebound a few minutes later but his backhanded effort struck the post and inside the final six minutes, the Canadian center was denied twice by Ben Bowns in the Cardiff net.

The Stars pushed hard late in the game to kick-start another comeback but the Devils held strong to protect their three-goal lead and with eight seconds left, Mike McNamee added a sixth to emphasise the win.

Overall, it was a close game that was not reflected in the score but the Stars must regroup for their next huge playoff battle at home against the Glasgow Clan this Saturday.