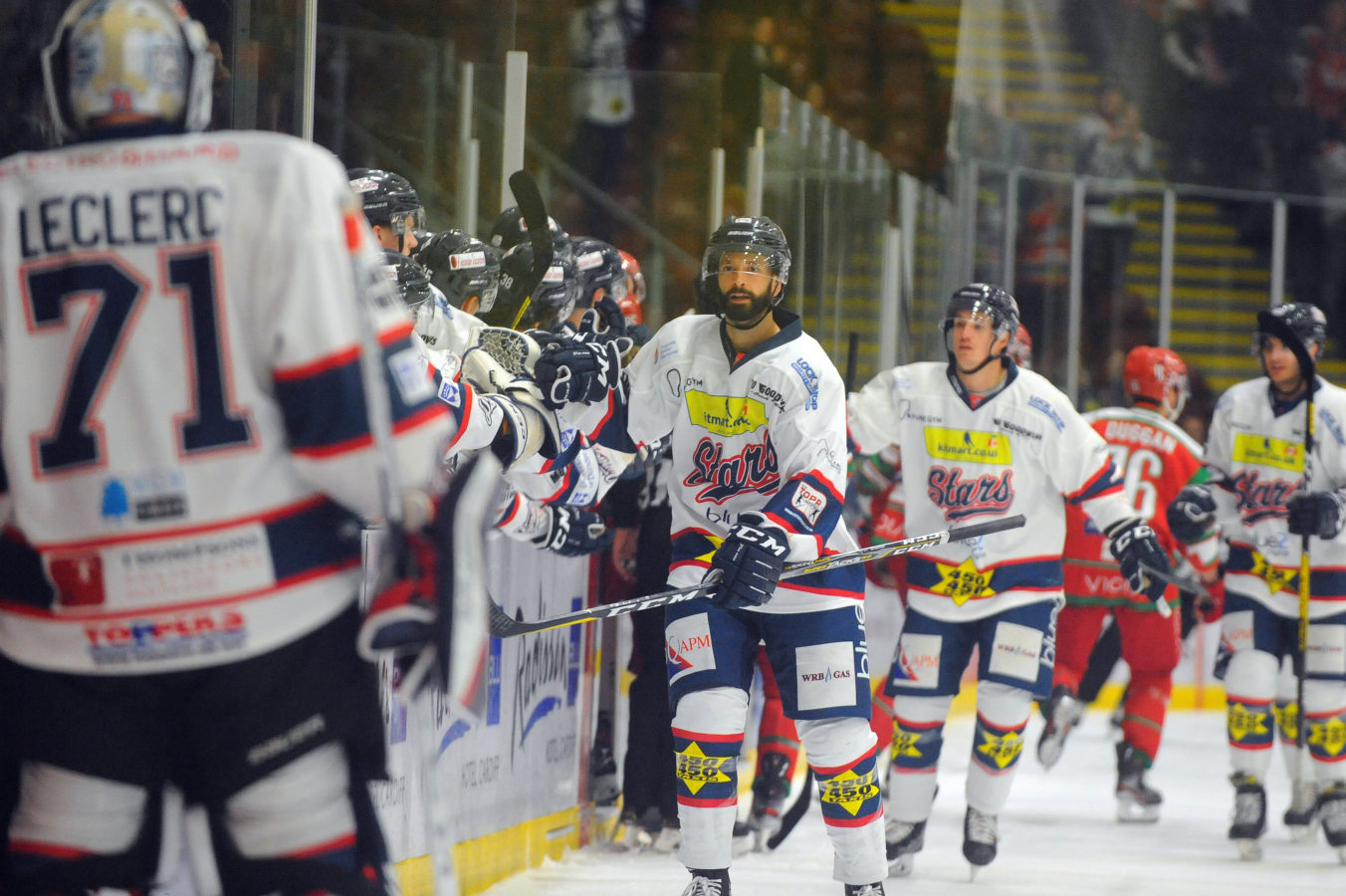 The Kitmart Dundee Stars were involved in a 14-goal thriller at the Viola Arena on Thursday night but were left heartbroken after letting four leads slip to the Cardiff Devils.

The Stars were left a man short after just 94 seconds as Shawn Boutin picked up hooking penalty as the Devils went in close on the Dundee goal.

After neutralising the threat from Cardiff’s powerplay unit, the Stars were set to see out the final seconds of the penalty but instead found themselves 1-0 up inside four minutes.

Forward, Elgin Pearce stripped the puck from Sean McMonagle before skating across the Cardiff goalmouth but he made sure he dragged the puck out of reach of Devils netminder, Ben Bowns before he easily slid home once the English keeper was completely spread out.

The final four seconds of the Boutin penalty expired as Dundee were forced to defend their lead straight from the restart but the home side would level the score in the 6th minute.

Devils’ defenseman, Mark Richardson was given time on the puck close to the Dundee blueline and that allowed him to flick the puck right into the top right corner, beating the Dundee goalie, Alex Leclerc on his glove side.

Omar Pacha’s men nearly retook the lead as Jordan Cownie went through on the Cardiff goal and he slipped his shot through the legs of Bowns.

As the puck was slowly moving towards the goal line, a flying Joey Haddad crashed into the net as he tried to clear the puck but failed to touch it.

Referees Stefan Hogarth and Dean Smith reviewed the play but gave a ‘No goal’ decision in the 12th minute.

Following a long period of end-to-end action and the teams being locked in a stalemate for the next goal, each side had an excellent opportunity to get ahead.

Dundee’s Kevin Dufour was through on goal but despite pulling up at the last minute to fool the Cardiff keeper, he was denied by the left leg of Bowns.

At the other end, the Devils went straight down the ice and if not for a triple pad save by Leclerc the home team would have had their first lead of the game.

After being unable to capitalise in the final minute, the Stars used the interval to regroup and rest but they still would not score on the remaining 59 seconds of their man advantage in the second.

However, they did score on the very second it expired.

Drydn Dow was arriving late at the back door of Bowns’ net and turned in a pass from the Stars captain, Matt Marquardt who had dropped behind the goal line to open the passing lane to Dow.

Each side had taken another minor penalty each but after returning to full strength, the Stars would increase their lead on 28 minutes.

Pearce netted his second as he got through on a breakaway after being played in by Justin Maylan and the Canadian forward sent a shot across Bowns and into the left side of the net.

Straight from the restart, the Tayside team were in trouble as Marquardt was sent to the sin bin for an elbowing foul and Andrew Lord’s powerplay unit would quickly punish the Stars.

Sean McMonagle drilled a shot from high in the slot through a bunch of traffic in front of the Dundee net and a screened Leclerc could do nothing to stop it.

After scoring in the 29th minute, the Welsh club made it 3-3 in the 30th minute as Matias Sointu was one-on-one with Leclerc but put the brakes on at the last second before he easily tapped the puck in past a fully stretched Stars goaltender.

Charles Linglet was fresh out the Cardiff penalty box after serving a two-minute minor but the Stars were again through on goal.

However, this time Pearce was unable to apply a clinical finish and in-form marksmen, Dufour could not do any better.

Nevertheless, Dufour showed just how clinical he can be after being handed another breakaway.

This time he got on the end of a stretched pass from a Dow and buried the puck past Bowns in the 37th minute.

With Dundee back in front for a third time, they again built on their lead as the Devils were missing their captain, Joey Martin who was in the box for an interference foul.

Justin Maylan poked home a loose puck after Bowns had made the initial stop and that powerplay goal put the visitors 5-3 ahead going into the second intermission.

The third period seen the trend of Cardiff pulling it back to an equal score line continue.

Matt Pope provided the fourth goal for the Devils as he hit Martin’s pass first time and sent it flying past Leclerc on 44 minutes.

Pope quickly netted for a second time as following a mass scramble in front of the Dundee goal, that was never whistled down, the puck came out and Pope received it before launching a shot high over the shoulder of the Stars goalie.

The goal was reviewed with the Stars appealing for a case of goaltender interference but after long revision of the play, the goal was given in the 49th minute.

Drydn Dow would net for a second time just moments later as Marquardt set him up with another cross-ice pass that required the defenseman to arrive late at the back post for a tap in.

However, that would be the Stars’ final lead of the game and it lasted just 39 seconds.

Gleason Fournier let rip on a quick shot that slipped through the grasp of Leclerc in the 51st minute before Stephen Dixon put Cardiff ahead for the first time in the match.

After 52 minutes of play, Dixon turned a Blair Riley pass toward goal and it slid between the legs of Leclerc and across the line, to make it 7-6 to the home side.

Both Riley and Bryce Reddick picked up late penalties giving Dundee the chance to answer back but it came down to the final two minutes and with Reddick in the box, Pacha pulled Leclerc to have a six-on-four advantage.

Although, inside the final minute of the game, Matthew Myers corralled the puck in his own end and launched it down the ice and into the empty net for a shorthanded goal.

A heartbroken Dundee side were left with nothing to show after pushing one of the league’s top teams all the way in their own building.

Pacha will have to pick his side up and tidy up their defensive game for Sunday when the Sheffield Steelers visit Tayside.

Buy tickets HERE! for Dundee Stars next home game versus the Sheffield Steelers on Sunday night, face off 5.00pm!