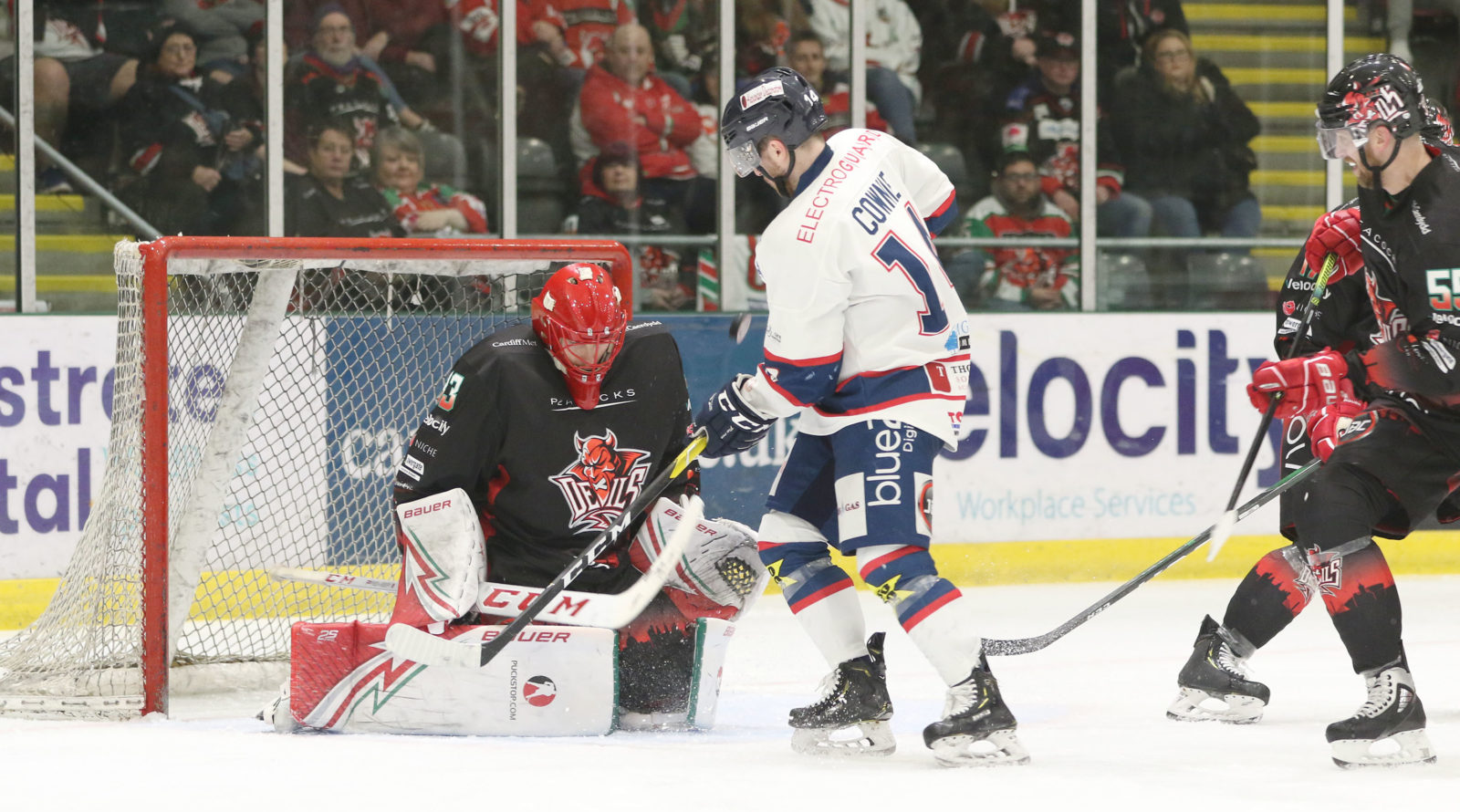 The Kitmart Dundee Stars were in the Welsh capital on Sunday and looking to complete a four-point weekend but both teams were up for the occasion and made an energetic start to the match.

The Stars created a number of chances in the opening minutes and made a great start on the road but when Alex Schoenborn was sent to the sin bin for a tripping foul on five minutes, the home quickly regained control of the game.

After threatening the Dundee net for nearly two minutes, the home side finally broke the stalemate as Blair Riley deflected Matt Pope’s shot past Alex Leclerc in the seventh minute.

After taking the lead, the Devils began to dictate more of the play but the Stars were given a chance to tie things up as they found themselves on a five-on-three powerplay after 10 minutes had passed.

However, an excellent penalty kill by Cardiff meant they would stay in the lead and they would double their advantage with another powerplay marker in the 15th minute.

Moments after Leclerc had made a stellar save to deny Pope, Joey Haddad blasted a shot straight in from the high end of the Stars zone to make it 2-0.

Omar Pacha’s men were still playing a gritty road game and were working hard to claw their way back into the fixture and another opportunity with the man advantage arose when Cardiff’s Mark Louis was punished for a hooking foul with a minute to go int he first period,

Dundee had a few chances to score before the first break but the buzzer sounded before Kevin Dufour could batter the puck past Ben Bowns and that left the Tayside team with 52 seconds of powerplay time to start the second session.

Andrew Lord’s men killed off the remaining time of Louis’ minor before they extended their lead to 3-0 through Pope.

Shaone Morrisonn saw his shot from close range saved and sent skywards by Leclerc but Pope drifted in from the left side and batted the puck from mid-air into the net on 22 minutes.

Although, the Stars finally got off the mark after 25 minutes as with Josh Batch in the box for a high-sticks foul, Dufour fired past Bowns to make it 3-1.

Dundee’s Egils Kalns had passed down to Jordan Cownie, who was standing just behind and to the left of the Devils goal and from there he sent a quick pass forward out to Dufour.

All the momentum came rushing back to Dundee and another powerplay chance arose, however it was cut short as Drydn Dow was punished for a hooking infraction in the 33rd minute.

Despite, Dundee seeing out the Dow minor penalty, Stephen Dixon was left unmarked in a dangerous area and as the Welsh outfit returned to full strength, he blasted home the Devils fourth goal of the night.

In the 35th minute, Charles Lenglet picked out Dixon alone in the slot and his first time effort nearly burst the net.

Another late penalty was taken by Louis but it was the home side that took advantage of the extra space on the ice, as Haddad came up with a big shorthanded goal to push the Devils 5-1 ahead.

Morrisonn forced a turnover in the Dundee end and Haddad was in the right place to control the puck and then place his shot just out of the reach of Leclerc on 38 minutes.

The scoreline after two periods did not reflect the danger, the Stars had caused the Devils but a clinical approach from Cardiff was the difference.

In the third period, the game had settled down more as the Devils looked to protect their lead and in the 48th minute there was some concern for Stars forward, Colton Kroeker as he headed towards the dressing room after a collision with Batch.

However, the Canadian did re-appear on the ice two minutes later and finished the game but there was still another goal left in the game and it went the way of the visitors.

Dundee netted once more of the powerplay, as Jagger Dirk squared a pass right across the Devils zone to Matt Marquardt, who smashed a first-time shot past a stretching Bowns on 54 minutes.

Then there was two late chances for either side to add more goals but both Riley and Dufour failed to score on penalty shots as each were fouled while on breakaways, 20 seconds apart.

The Stars have held their position above Fife Flyers but are yet climb back into the playoff spots and their next chance to get back inside the top eight is next weekend, when they visit Coventry Blaze and host Cardiff.