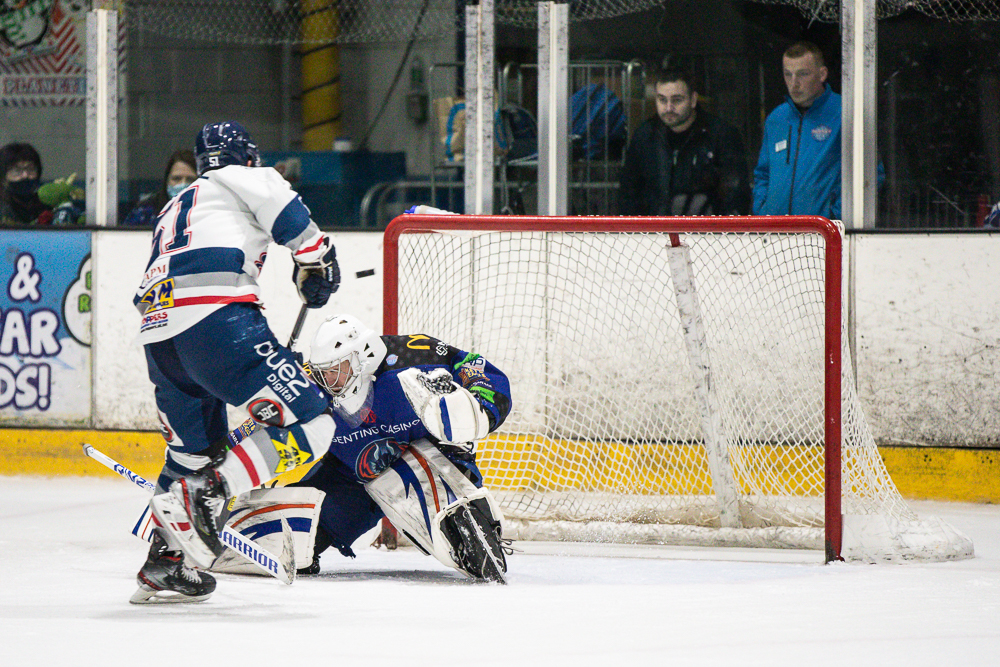 The Kitmart Dundee Stars endured a tough night at the SkyDome Arena on Sunday night, as they suffered a

The match started with a goalless first 20 minutes, as neither side could end the stalemate in the first period, however the Stars had outshot the short-benched Blaze 15-5.

Despite continuing to dominate and dictate the play, the home team found themselves ahead on 23 minutes.

With Dundee pinned in their own zone, Coventry’s Ryan Penny picked out the top corner of Adam Morrison’s goal from the middle of the slot.

Then, in the 29th minute, Blaze forward, Johnny Curran was penalised for holding and given a two-minute penalty.

However, even whilst being a man down, it was Coventry who took advantage of the situation.

Dane Gibson broke down the ice on the left flank, before sending an accurate finish into the far right corner, beating the Stars goalie over his shoulder, to make it 2-0.

Danny Stewart’s side then bagged a second shorthanded goal, right after Omar Pacha had used his timeout to try and get his players re-focused and fired up.

After a quick shot from Alec Marsh from the face-off, Janne Laakkonen was in the perfect position to tuck home the rebound, as Marsh’s shot bounced off the chest of Morrison.

With Dundee in despair and looking like they were about to be down and out, Charlie Combs restored some hope with a quick reply.

The American forward got the Stars off the mark on 31 minutes, as he sent a shot through a pack of bodies and found the back of CJ Motte’s net.

The Tayside team then dominated the final part of the second period and should have reeled the Blaze in further.

The biggest missed chance for the Stars was when Spencer Dorowicz pulled off a flashy move to get past his marker and in on goal, but he would see his shot cannon off the crossbar.

In the third period, Dundee did not get the start they had hoped for as skill and luck combined to extend the West Midlands club’s lead to 4-1.

After just 36 seconds, David Clements saw his shot blocked but the flying puck hit straight off the moving stick of Penny and into the back of the Dundee net.

The home team did not let up and continued to pressure the Stars, eventually being rewarded for their hard work.

In the 44th minute, Luke Ferrara danced through the Dundee defence, before beating Morrison from point blank range, making it a 5-1 lead for the Blaze.

There would be no more scoring, only penalties as tempers flared between both sides, with four players getting sent to the sin bin or ejected inside the final four minutes.

The final buzzer sounded to end the Stars weekend and they had one lone point to take back to Tayside.

Next up for Omar Pacha’s men is another trip to Manchester on Saturday to face the Storm, before they welcome Belfast Giants to the Dundee Ice Arena on Sunday.