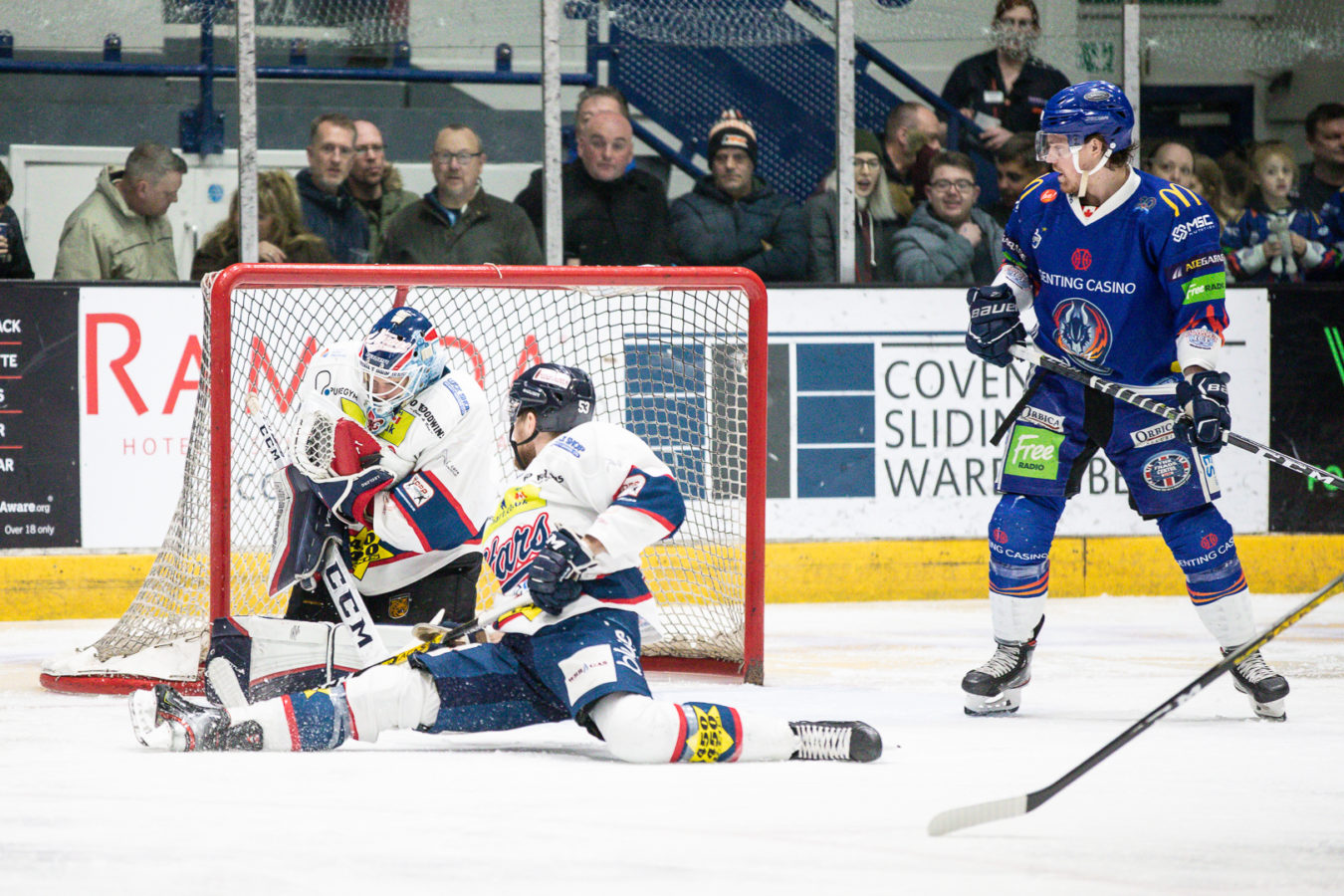 The Kitmart Dundee Stars took on the Coventry Blaze for the final time in the regular season and were in need a big bounce-back performance on the road.

The Stars made a great start to the match and they quickly created the opening chance but forward, Colton Kroeker sent the shot wide after coming under heavy pressure.

The visitors were attacking the Coventry goal again and this time Jordan Cownie was the shooter to be denied as Drew Schiestel made a diving block to keep it out.

Although, when Dundee’s Matt Carter was punished for tripping on three minutes, it seemed like his side’s positive start would be halted.

Yet, the Stars continued to create turnovers and burst forward, allowing Kevin Dufour to break forward but his shot was saved by C.J. Motte in the Coventry goal.

Just after the Tayside team returned to full strength, Shawn Boutin blasted a slapshot straight into the net from just inside the blue line.

The Dundee defender netted his second goal of the weekend with just over six minutes played and after the restart Omar Pacha’s men continued to hit the Blaze with waves of attacks.

There were a further four or five goal that Motte had robbed from the Stars to keep it at 1-0 as, they had controlled the first 10 minutes of the tie.

Dundee goaltender, Alex Leclerc made his first save on a difficult shot a few moments later, as David Broll forced the Canadian keeper into a low save but that did not stop the Stars from going straight back up the other end and making Motte work even more.

The chances continued to go from end to end until, the Blaze tied things up through Charles Corcoran after 18 minutes.

The American center took possession from the halfway line and burst forward into the Dundee end and despite being forced wide by defenders, he picked out the far corner with a wrist shot.

However, Dundee’s dominance was nullified 50 seconds later as Dillon Eichstadt tucked home a loose rebound to make it 2-1 to the home team.

There was a review of the goal, as the goal frame had become dislodged while Leclerc made the save on two previous shots but after a short review, referees Matt Rose and Dean Smith allowed the goal to stand.

Therefore, the Stars went into the first break behind after making an excellent start to a game they needed to win.

In the second period, the Blaze created an early breakaway as a long pass found Ross Venus, who was positioned high up the ice but Leclerc tracked him well and made the stop.

However, Carter made another foul and was sent to the sin bin for slashing after 64 seconds of play but again Dundee defended well whilst a man down.

There were numerous odd-man rushes for each side in the following minutes, although neither team converted the chances and the West Midlands club still lead 2-1 at the halfway mark.

The Scottish club then got their first powerplay chance in the 36th minute as Dillon Lawrence tripped up Cownie but they could not get back on level terms.

However, there was another set of end-to-end chances as Matt Pohlkamp tried to finish off a breakaway but Leclerc stuck with him and kept the puck out and at the other end both Kroeker and Dufour could not tuck away a rebound.

Although, the Stars had to see out the period a man down as Alex Schoenborn was punished for a tripping infraction just before the final intermission.

Pacha’s penalty killing unit did their job to start the final period and Dundee quickly built on that, as they tied things up inside 42 minutes.

Carter had skated from left to right in front of the Blaze goal before flicking a shot from a narrow angle that was saved but he collected his own rebound, rounded the net and tucked the puck in at the other post to make it 2-2.

There was then a chance seconds later for the Stars to go ahead as Eichstadt was penalised for cross-checking but Danny Stewart’s men survived the man advantage.

Corcoran could have put the home team back in front in the 50th minute, as he was involved in a two-on-one break for the Blaze but he sent a pass too far behind his teammate and the opportunity was gone.

There was then a spell of domination again for Dundee as they looked to be back in control of play, like they were at the start but Coventry were still showing small glimpses of their attacking ability.

It all came down to the final minute and as both teams looked to be content with at least a point, there was a turnover at centre ice and that allowed the Blaze to get into the Stars end with just seconds remaining.

Andrew Johnston and Ferrara were in two-on-one and with six seconds on the clock, Ferrara finished high into the top corner to nick all the points for the Blaze.

The Elite League’s top goalscorer netted his 33rd of the season to confine Dundee to another loss this weekend but Pacha’s side must pick them up for the visit of Cardiff Devils in seven days.