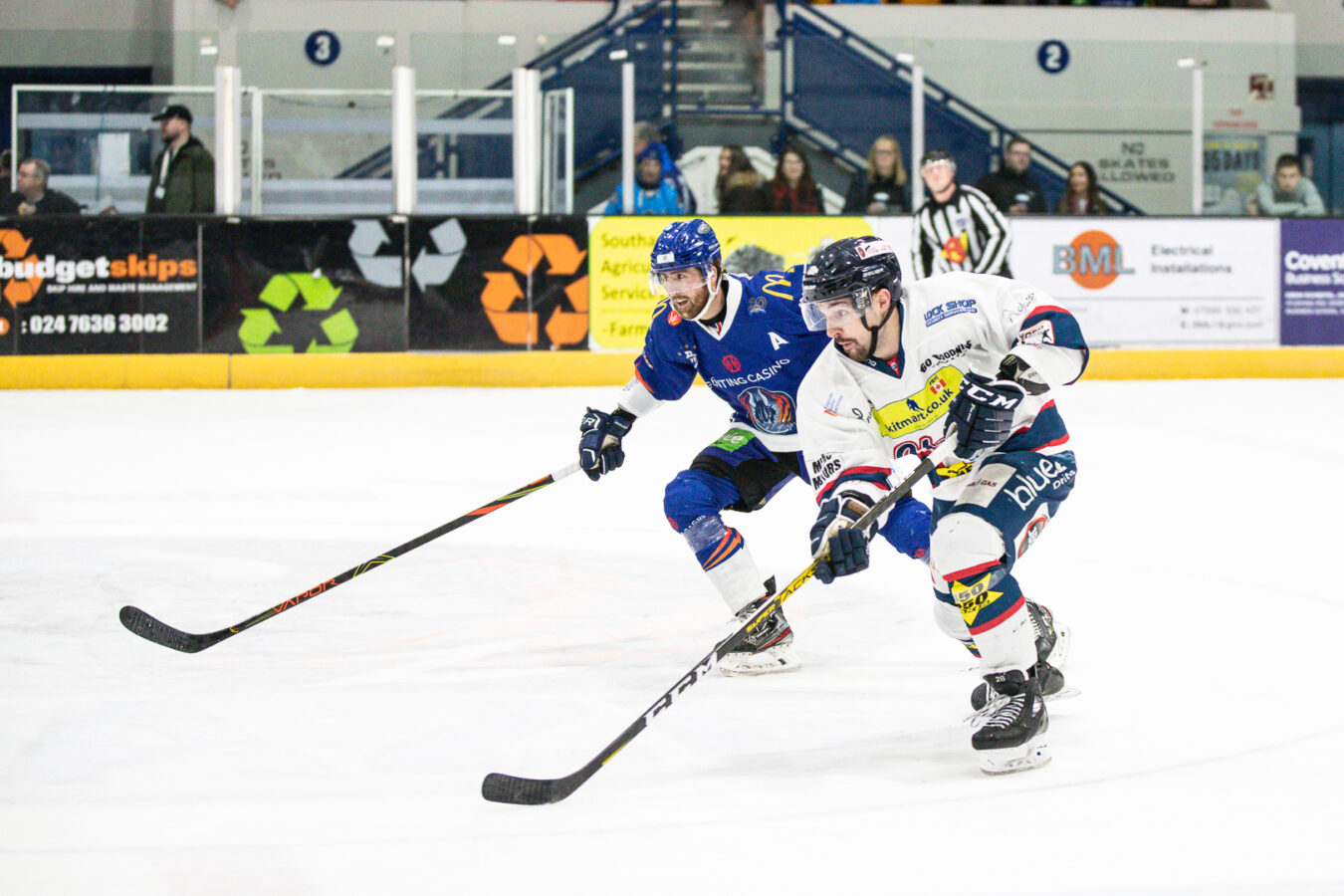 The Kitmart Dundee Stars went into their first game of the season in Coventry still without the injured Kris Inglis and Shawn Boutin.

Both sides had chances in the opening minutes but the first keeper to be tested was Dundee’s Alex Leclerc in the 4th minute as he denied Janne Laakkonen’s shot in the fourth minute.

The Stars had a few chances of their own but none were able to trouble Jamie Phllips in the Blaze goal but in the sixth minute, Leclerc had to make another key save as he dove on top of a loose rebound to stop Dillon Lawrence scoring on his own rebound.

Although, with the home team creating the better of the chances, they were finally rewarded as Dundee defenseman, Duncan Speirs left the puck behind in his own end and that allowed Coventry’s Luke Ferrara, who was lurking deep in the Stars end, to swoop up the rebound and fire it past Leclerc from point-blank range on seven minutes.

Danny Stewart’s men quickly forced another error and Johnny Curran chased a runaway puck into the Dundee end, he then slipped past defender, Brett Stovin before firing a rising shot into the near-side top corner from a narrow angle to make it 2-0 after nine minutes.

Coventry quickly kicked things up another gear and added a third in the 11th minute as Justin Hache fired an absolute rocket first time that blasted through traffic and into the top of the net.

The West-Midlands club could have had a few more but the Stars slowly found their feet and managed to stop the bleeding to keep the score at 3-0 going into the first break.

The home team made another lively start to the second period and Dundee were starting to look like they had settled in but a penalty against Kevin Dufour in the 22nd minute, gave all the momentum to the Blaze.

Just over a minute into the powerplay, Coventry added a fourth.

An aggressive forecheck by the Blaze forced a turnover in front of the Stars net and Curran skated the puck across the face of goal before sliding a shot towards the back post but with Leclerc moving across with Curran, Ross Venus moved in and pushed the puck home.

Dundee then had there first real scoring opportunity as Justin Maylan jumped on the end of a bad pass but he just could not stick the puck past the large frame of Phillips.

Omar Pacha’s side then showed just how they can be as they hit the home team with a quick counter attack but the final shot hit the side netting and after 25 minutes, Dundee had found their game.

However, it appeared they were going to suffer a set back as Maylan was penalised for a holding foul but Coventry quickly picked up two penalties of their own as a too-many men call and a tripping foul against Dillon Eichstadt gave Dundee a four-on-three powerplay.

That was just what the Stars needed and they found their first goal as Egils Kalns hit a smart shot off the pads of Phillips and the puck went straight to Elgin Pearce who just had to tap it in, in the 29th minute.

The Tayside team took control of the tie and were creating an abundance of chances as next to go close was Craig Gans but the Coventry netminder made the stop on his shot before preventing Dufour from jamming in the rebound.

The Stars continued to press the Blaze and Jordan Cownie was unlucky not to finish off a rebound that had sprung out after a scramble in front of Phillips’ goal.

Dundee’s Colton Kroeker then had both time and space to get a shot off in front of goal but Phillips was quick of his line to close down the angle and punched away the shot with his blocker in the 36th minute.

Although, Coventry caught a break from the heavy pressure as Dufour lost control of the puck moving forward and that allowed the Blaze to quickly counter.

Lawrence and Venus broke forward with only Gans in there way but Lawrence was able to chip a pass over a diving Gans to Venus but the Brit sent his shot over the crossbar.

The Scottish side still trailed by three goals after two period but they had everything to play for in the third.

Things took a turn in the final period as it was the visitors who came out firing this time and Dundee reduced the lead to 4-2 after just 39 seconds.

Stovin hit a slapshot from just inside the blueline but it went wide of the target, although the shot bounced off the end boards and came straight Dundee’s Drydn Dow, who applied a simple finish.

However, the Blaze nearly responded immediately as Ferrara got in behind the Stars defence but just as he was releasing his shot, Anthony Beauregard got across to block the effort.

Pacha’s men continued their heavy offensive push and were rewarded with a third goal and it came through Dufour after 45 minutes.

After a poor clearance by Coventry, defenseman, Reilly O’Connor kept the puck in the zone and passed the puck to Dufour who put a shot on target from out on the right wing and somehow it slipped past Phillips.

Although, 38 seconds later, the home side were not giving up and swiftly pulled a goal back to restore their two-goal cushion.

The Blaze had been using an attacking positioning tactic on face-offs all evening and it finally paid off as they won possession from the draw, the puck came back to  Venus and he launched on straight past Leclerc.

With Dundee throwing everything forward, Coventry created plenty of off-man chances but they just could not apply a finishing touch but when they did get a shot off, the Dundee goaltender made the key stops.

Then, just as the Stars began to get forward again, they were dealt the fatal blow as Lawrence was free to skate into the Dundee end and get a shot off and his effort just slipped through the grasp of Leclerc before rolling across the line in the 52nd minute.

With a three-goal cushion, the game looked out of reach for Dundee and the Blaze held on to confirm the 6-3 win.

The Stars went winless for another weekend but next week they have another set of chances as they go up against Nottingham Panthers in back-to-back games.