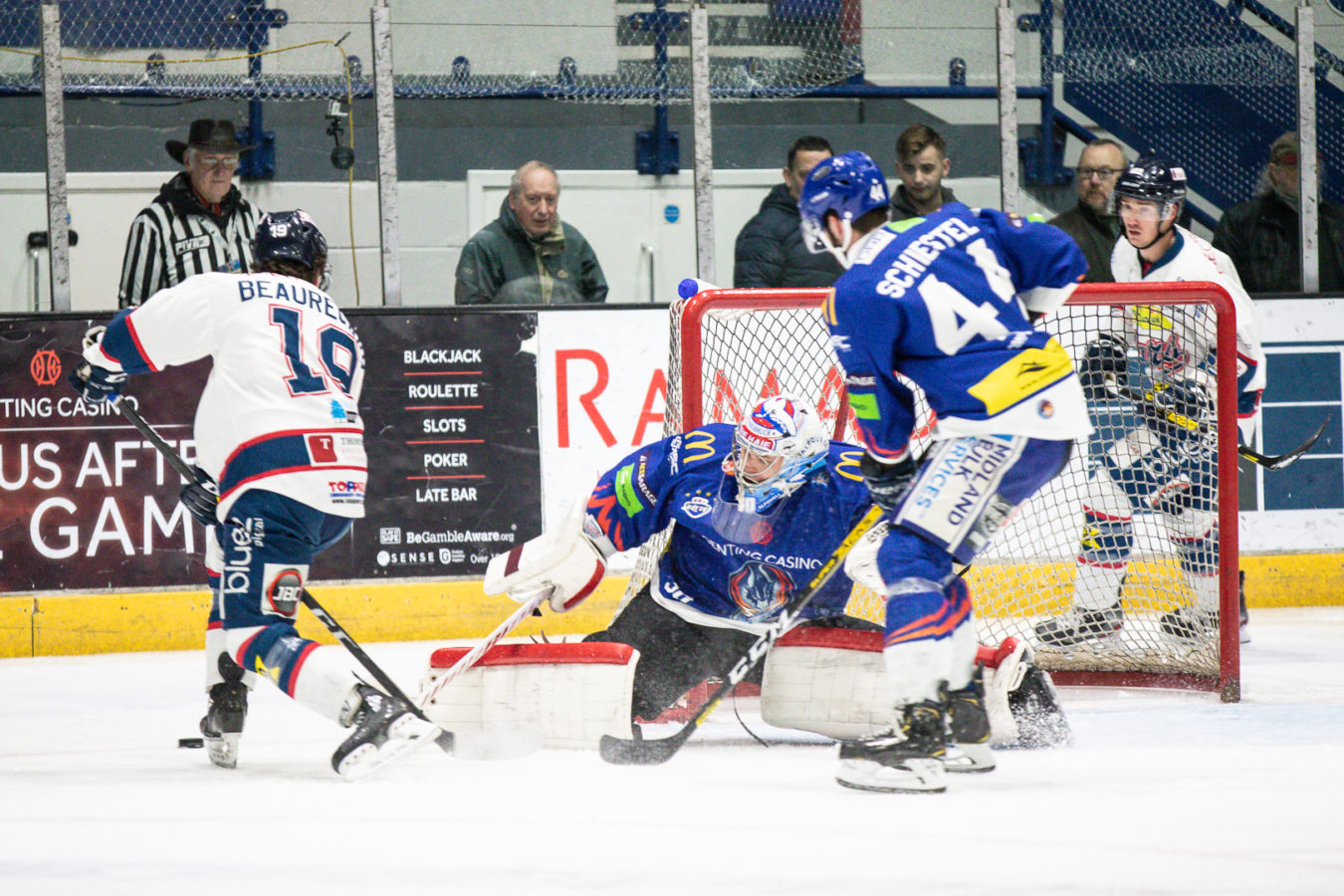 The Kitmart Dundee Stars arrived in Coventry with hopes of claiming two more points that could prove vital to their playoff push and after just 28 seconds of play, they were handed a big chance to start the scoring.

In his first game back from injury, Blaze forward David Broll was quickly thrown out of the match after he hit Stars defender, Reilly O’Connor into the end boards from behind.

O’Connor hit the ice and was down for several minutes before being helped off with blood dripping down his face but during that time, referees, Andrew Dalton and Shayne Alyward made the decision to eject Broll.

The Canadian forward was handed a five plus game penalty for boarding and that left Dundee with an uninterrupted powerplay for the next five minutes.

However, after the powerplay had ended it was the home side who had capitalised on the situation as they held a 2-0 lead.

After just 100 seconds, Coventry had put the puck in the net, as a turnover in the neutral zone allowed Dillon Lawrence and Ross Venus to break through clear on goal.

Lawrence squared a pass to his teammate, who got his shot up and past the Stars goalkeeper but Alex Leclerc had done well to stay with the play.

Just as Omar Pacha’s men started to find some offence and test the Blaze netminder, they turned over possession again and this time it was Andrew Johnson and Matt Pohlkamp who were in behind after five minutes of play.

Another squared pass allowed Pohlkamp to finish into a wide-open net as Leclerc was unable to track this pass as well as he did before.

The Blaze returned to full strength but finally there was a real scoring threat from Dundee as Kevin Dufour crossed the puck to Anthony Beauregard but his first time effort was denied by CJ Motte in the Coventry goal.

The action had gone from end to end before the English outfit got their first man advantage of the night but Dundee were solid on the penalty kill.

However, just as they returned to full strength, Lawrence made it 3-0 to the home team with a fast shot from just in front the Stars net after 17 minutes.

Although 17 seconds later, Omar Pacha’s men eventually conjured up a quick response as Beauregard pressed the Blaze defenseman behind his goal and forced a turnover.

Whilst falling, Beauregard slung the puck out in front of the goal to Dufour and the Canadian calmly tucked the puck past Motte.

Coventry then had an opportunity to restore their lead straight away but Leclerc came up with a crucial stop to keep the Stars within two.

Danny Stewart would have been pleased to hold a 3-1 lead after the first period and his players could have extended it with a powerplay goal early in the second session.

With Shawn Boutin in the box for a hooking foul, the West Midlands club were searching for their fourth of the evening but it was the visitors who went close as Dundee’s Brett Stovin pressed high in the Coventry end and won the possession.

Stovin quickly tried to slip a shot through the five-hole of Motte but the goalie managed to hold the puck between his legs.

Motte came up big for the Blaze again minutes later as he stopped a Stars break with a glove save before swiftly launching the puck forward to Johnston but Leclerc was there to deny the breaking forward.

Although moments later, the Dundee netminder was forced into action again, as he made a stop with his face mask to keep Lawrence’s shot out but when the play came back around, he made another good save on a first-time shot from Johnny Curran.

However, the rebound fell perfectly for Venus and he was free to tuck in the rebound at the back post in the 28th minute.

The Stars were not disheartened after losing a fourth goal as they pulled one back with a powerplay goal.

Justin Hache was in the home team’s penalty box for tripping and with the man advantage, Drydn Dow sent the puck down to the right wing, where Beauregard instantly fired a shot that hit the side of Motte before landing in the back of the net on 29 minutes.

The Tayside team were then handed a chance to pull another back as former Star, Charles Corcoran was punished for a slashing foul in the 33rd minute and it soon became a two man advantage as Evan Bloodoff joined him in the box with 21 seconds left on Corcoran’s minor penalty.

Pacha’s side did manage to find a third goal whilst having a two man advantage, when Beauregard passed the puck to Stovin and from close range, he jammed his own rebound under Motte to make it 4-3.

The Stars then completed the comeback after 37 minutes, when a long range pass from Matt Marquardt found Colton Kroeker, who cut the puck back to Dow and the defender turned the shot up and over Motte to tie the game.

In the third period, Lawrence put Coventry back in front as three Blaze attackers broke forward before Venus dropped the puck back behind to Lawrence and he picked out the top left corner after 42 minutes,

The Stars continued to fight back and search for another equaliser but the home side packed in and prepared to hold on to their lead.

The Scottish side had a few chances to make it 5-5 but just could not find the same clinical finishing they had in the first 40 minutes.

However, their chances of tying the match took a hit when forward, Jordan Cownie picked up a 2+10 penalty for boarding Coventry’s David Clements in the 56th minute.

The resulting powerplay allowed Curran to seal the victory for Stewart’s men, as he beat Leclerc with a low shot on his blocker side in the 58th minute.

There was also a chance for Lawrence to bag his hat-trick as he was fouled by Dundee’s Jagger Dirk and won a penalty shot but as he went forward, Lawrence lost control of the puck and the chance was gone.

Dundee could not add any more goals before the final buzzer but they will have a chance to close the now four-point gap between them and the playoff spots on Sunday night at home against Cardiff Devils.