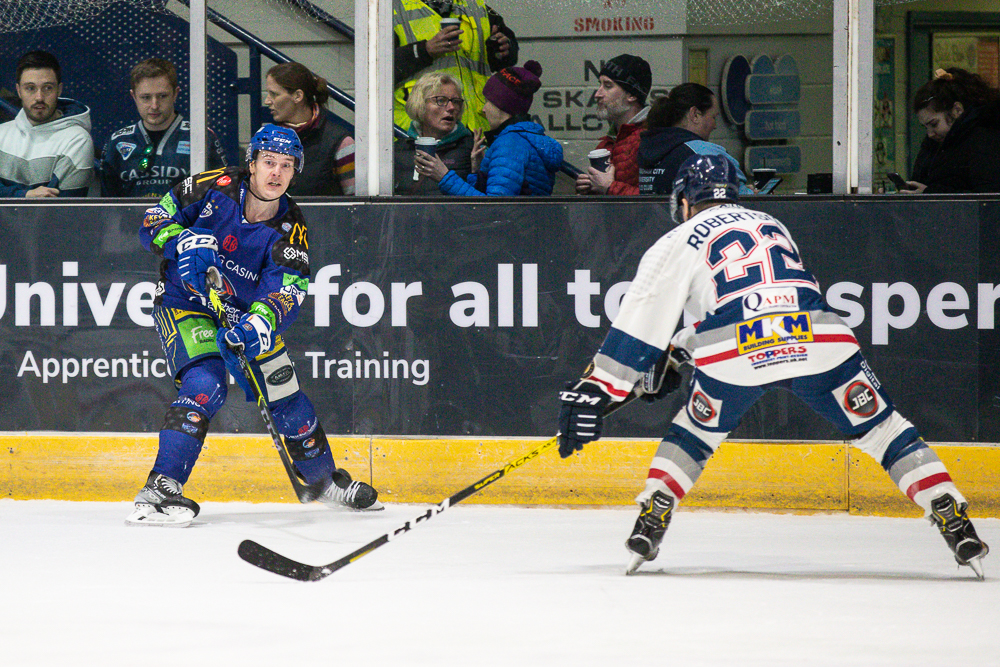 The Kitmart Dundee Stars arrived in Coventry off the back of a loss in Guildford and without four key players and their short bench had a lasting affect on the game.

The game started with a slow tempo as both teams edged there way into their third matches of the weekend.

Although, a penalty against Dundee’s Quinn O’Brien in the 11th minute allowed Janne Kivilahti to open the scoring as he drove home a low shot to put the Blaze in front.

The Finn then bagged his brace on 18 minutes, as he beat Adam Morrison again by jabbing a loose puck under the goaltender to make it 2-0.

The Stars had been playing well but timely mistakes had proved costly in third and they needed a big response in the second period.

However, they were quickly buried under a pile of Blaze goals as Luke Ferrara blasted a first time effort from out wide into the net on 23 minutes.

Kivilahti then netted twice more in the middle session, as he capitalised on two more powerplay opportunities after Dundee’s Timi Lahtinen was boxed for a slashing foul and then Gabriel Desjardins was punished for elbowing.

At 5-0 down, Omar Pacha called a timeout to rally his players and soon got the response he was hoping for.

Inside the 28th minute, Dillon Lawrence used his large presence to occupy the net front and was unstoppable as he tapped in the rebound from Alexandre Ranger’s shot that had been stopped by CJ Motte.

Dundee were then handed a late two man advantage as Joey Raats and Nathaniel Halbert were sent to the Coventry sin bin for minor penalties.

That then gave the Stars a chance to utilise the big shot of Kalvis Ozols on the powerplay and he was perfectly set up by Charlie Combs and Sebastian Bengtsson to rifle one past Motte on 39 minutes.

The Tayside team were still on the powerplay to begin the third period but did not get the goal they needed and were quickly quashed by Evan Bloodoff’s 44th minute strike.

Danny Stewart’s men then added a seventh goal in the 51st minute to round off the scoring at 7-2, as Dane Gibson had all the time in the world to shoot past Morrison.

After Friday night’s thrashing, the Blaze responded well to claim four points, as the Stars suffered on the road.

However, there is little rest time for Dundee as they go into another three games in three nights next weekend, with trips to Cardiff Devils, Glasgow Clan and Fife Flyers.