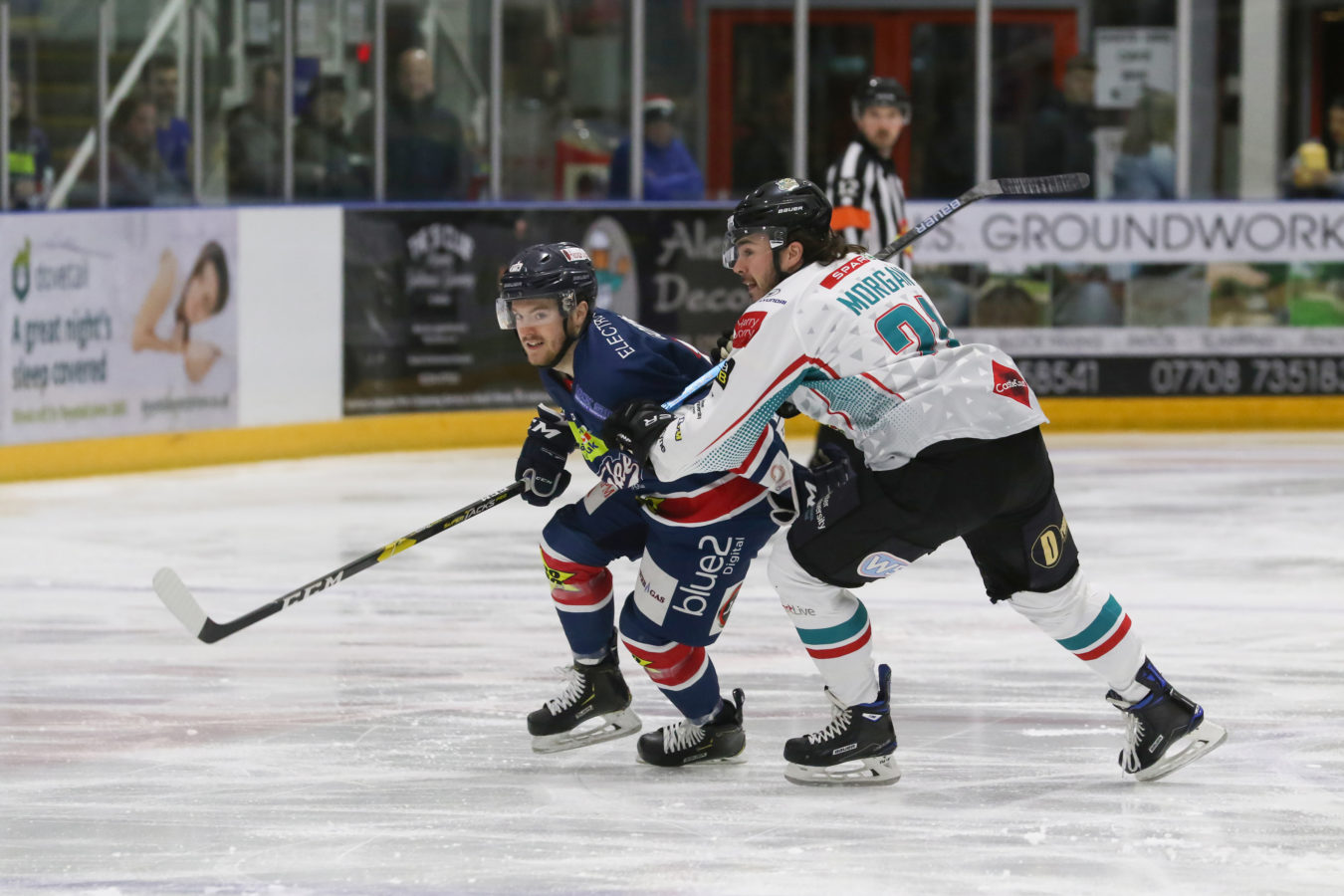 The Kitmart Dundee Stars suffered their second loss of the weekend as the Belfast Giants came to Tayside and claimed a 4-1 win at the Dundee Ice Arena.

The Giants had the most scoring opportunities during the first half of the opening period and they took the lead after seven minutes of play.

Belfast’s Ryan Lowney had won possession after a defensive error by the Stars and he went through on goal before passing the puck to Curtis Hamilton, who was arriving on his left and Hamilton had a massive section of the goal to shoot at while Dundee goalie, Alex Leclerc scrambled across his net.

Although, the Northern Irish club were only in front for just short of five minutes as Drydn Dow put the home team back on level terms.

Dow hit a slapshot from the blueline but his off-target effort bounced back off the plexi glass and rebounded off of Belfast keeper, Shane Owen and into the Giants goal in the 12th minute.

Omar Pacha’s men could have went ahead in the 15th minute, as Dow picked out Colton Kroeker with a pass and the Stars forward got a shot off from right on the edge of Owen’s crease but he could not get it past the netminder.

However, Belfast re-took the lead after 14 minutes as Lewis Hook turned in Liam Morgan’s squared pass after the Giants won possession from an offensive face-off.

Morgan’s pass had plenty of pace and Hook was able to push it into the net before Leclerc could get across to make the save.

Adam Keefe’s side went into the first break with a 2-1 lead on the road and started the second period off by looking as similarly dangerous as they did in the first.

Dundee looked to be dealt a heavy blow as they thought they had lost their defenseman, Reilly O’Connor after he collided with the goal and appeared to have a head injury but the Canadian did return to the match after a short spell in the dressing room.

Morgan was again involved in the scoring as he netted the visitor’s third goal of the night in the 33rd minute. The Canadian had followed up on a shot at Leclerc which the Stars goalie had held between his stick and his leg pad but Morgan slipped his stick in between and jammed the puck into the net to the shock of Stars players and fans.

The Tayside team could have pulled one back when Kevin Dufour went in on Owen at pace but his shot was stopped by the blocker of the Giants goaltender and after it sat on top of his blocker rolling about, Owen quickly swept it up with his trapper.

At the other end, Leclerc made a few vital stops to keep the score at 3-1, after which Pacha used his timeout to settle his side down and to make sure they didn’t lose another goal before the second intermission.

However, after just 21 seconds into the third period, the Giants made it 4-1 as Brian Ward fired home a loose rebound after a short scramble for possession in front of Leclerc.

There had only bee two penalties up until 41st minute but then both team’s discipline levels dropped dramatically.

Curtis Leonard was sent to the Belfast box for holding, just 21 seconds after the last goal but the Stars could not utilise the man advantage.

There was then some concern for Belfast’s Kevin Raine as he missed his target for a hit and faceplanted into the boards causing some injury to his face but he would be treated on the bench before carrying on.

The Stars could have pulled one back early in third stanza as Owen stopped a fast slapshot from the blueline before the rebound dropped to the right of the goal, where it was corralled by Jordan Cownie but he put his shot on the wrong side of the post and the chance was gone.

Tensions began to rise between the players and Keefe’s men were looking more comfortable, despite the Dundee still creating some chances.

Owen made another fine save as Elgin Pearce forced him into action with a slapshot that again left a rebound but this time the Canadian was quick to cover up the second chance after 51 minutes.

The referees, Chris Wells and Trpimir Pirigac caused some confusion as on the same play the penalised Dundee’s Jagger Dirk for tripping Ben Lake and also punished Lake for diving but the Stars ended up on a powerplay shortly after as Liam Reddox was boxed for charging the Stars keeper.

More penalties came on 55 minutes as Raine and Dundee’s Egils Kalns looked to be up for a scrap, but the pair never really got going and after a short tussle were both handed double roughing minor penalties.

Then 11 seconds later, Lake returned to the box for cross-checking, giving Stars another powerplay but they could not beat Owen again and with five seconds to go, Justin Maylan headed for the Stars sin bin, also for cross-checking and that rounded off the action.

Belfast secured their second win against Dundee in five games and left the Stars pointless for the weekend but a win for Manchester Storm has dropped the Stars to the foot of the table.