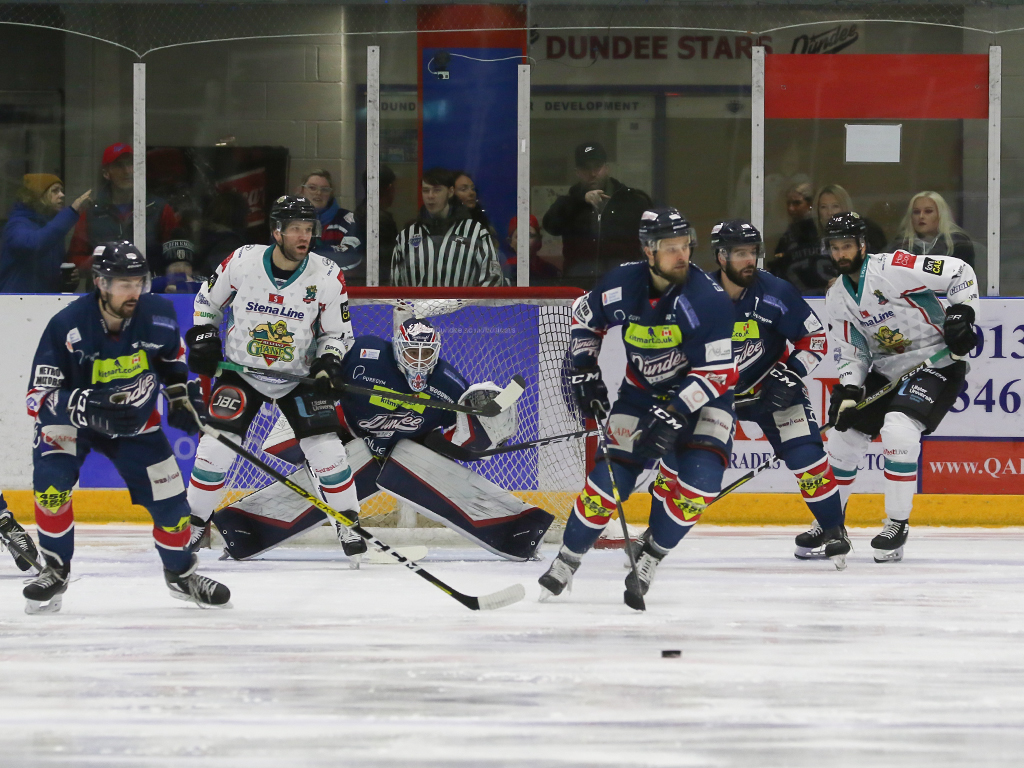 The Kitmart Dundee Stars were looking to continue their good form into 2020 as they opened the new year at home to Belfast Giants.

After fending off an early Giants powerplay the Stars had a powerplay chance of their own but neither side could take an early lead.

The action went back and forth for most of the first period but after two more man advantages were wasted by Dundee they finally broke the deadlock as Matt Carter redirected Shawn Boutin’s shot past Shane Owen in the 19th minute.

The trailing visitors did not make a great start to the second period as while chasing down a puck that had been lobbed down the ice, Belfast’s Liam Morgan took an unnecessary high-sticking penalty after he caught Dundee defender, Jagger Dirk up high.

The Tayside team were quick to double their lead as Carter grabbed a loose puck from the face-off and skated behind the Giants goal before beating Owen to his left post with a wraparound shot after just five seconds of powerplay time.

However, Adam Keefe used his timeout and shared some strong words with his players and that was enough to spark a reaction from his side and they got on the board through former Star, Elgin Pearce on 26 minutes.

Belfast were also on the powerplay when they scored and they beat Dundee netminder, Alex Leclerc with deflected shot as Pearce turned Curtis Hamilton’s effort past the Canadian.

Both sides were searching for the crucial next goal but the physical part of the sport was clearly present as each team picked up more penalties.

However, neither club could affect the score any further before time expired in the second.

The home team began the third period with a very short two-man advantage but after it expired, the Northern Irish side drew themselves level after forcing a turnover in the Dundee end.

Stars defenseman, Reilly O’Connor lost possession after he came under pressure from the Giants forecheck and the puck came to Pearce, who then played in Ben Lake.

Lake quickly moved forward, before sliding the puck under the legs of Leclerc to tie the game in the 43rd minute.

Each side had chances throughout the rest of the match to find a winner but both goaltenders were playing well and were able to deny everything that came their way, until David Goodwin nicked the points for Belfast with just over two minutes left to play.

The Giants forward converted his long-range effort and beat Leclerc down low after his side had absorbed a long period of Dundee pressure.

Omar Pacha pulled his keeper and threw out an extra attacker with 90 seconds left in a last ditch attempt to salvage their winning streak but the Stars were pinned back in their own end and condemned to their first loss of 2020.

There is only two days for the Stars players to recover as they head south for an English double header this weekend as they will take on Nottingham Panthers on Saturday and Guildford Flames on Sunday.