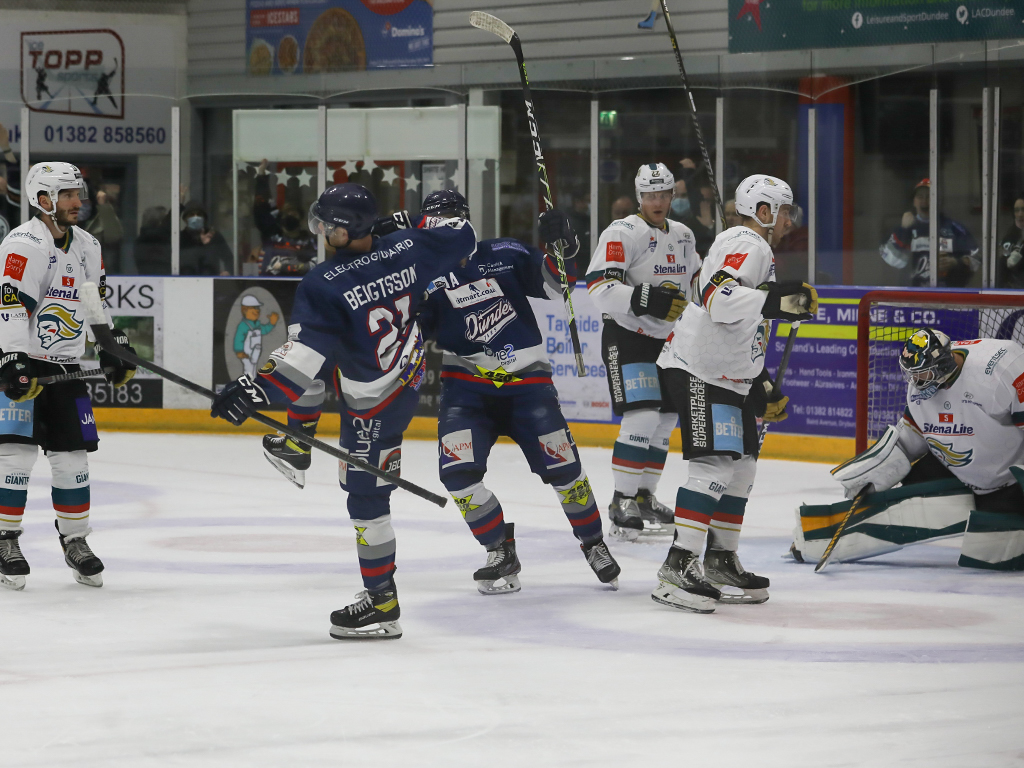 The Kitmart Dundee Stars supressed the red hot Belfast Giants to claim a 4-3 overtime win on home ice last night, as they kicked-off their double header against the Norther Irish side.

The Stars welcomed new signing Quinn O’Brien into the line-up for his Dundee debut and their now full roster meant Ben Brown, Caly Robertson and Alexandre Ranger were all scratches.

The opening 10 minutes of the match saw neither team dominate as both failed to get clean shots away through tightly packed defences.

The first clear cut chance of the night came as the Stars went on the powerplay, due to Belfast’s Mark Cooper holding back Craig Moore, but despite their opportunities to test Tyler Beskorowany, the game remained scoreless.

After surviving their two minute penalty, the Giants then went back on the attack and the back and forth passages of play resumed, as each team slowly opened up.

Eventually the first goal came inside the final two minutes of the first period and it was born from the hard-work of Belfast’s JJ Piccinich as he bulldozed his way down the right flank.

Piccinich would then pick out Scott Conway in front of net and as he drew all the focus of the defending Stars, a wide space opened up for David Goodwin at the back post and the American only had to tap the puck in to give Belfast the lead.

Adam Keefe’s men then resumed their control early in the second stanza, but that did not stop the home team from generating chances for themselves and Dillon Lawrence saw his effort strike the post in the 22nd minute.

However, the outlook of the game would soon swing into the Stars favour as they capitalised on a powerplay in the 29th minute.

Dundee’s Spencer Dorowicz deceived the Giants with a drop pass in to Gabriel Desjardins in front of goal and from there, the Canadian center picked out an unmarked Sebastian Bengtsson, who blasted the puck straight past Beskorowany.

Then, the Northern Irish club had a chance to retake the lead straight away but Conway saw his shot that was destined for the top corner, turned away by Adam Morrison at the last second.

However, the Tayside team then continued to blitz the Belfast goal with shots and quickly took the lead just two minutes later.

The Stars go-ahead-goal came from Toms Rutkis as he crashed the net and tucked home a loose rebound after the Giants goalie failed to contain the shot from Connor Sills.

Once again, the visitors had a chance to pull a goal back straight away but Tyler Soy was unable to direct his shot goalward after breaking through the Dundee defence.

Omar Pacha’s side then continued to tighten their grip around the Giants throat and swiftly extended their lead to 3-1 in the 34th minute.

Bengtsson gave the home crowd a case of Déjà vu as he smacked home a second goal from the same spot, once again assisted by Desjardins and once more on the powerplay.

Dundee then held that lead into the final intermission but were quickly pegged back by the title challengers, as Slater Doggett beat Morrison with a low shot on 41 minutes, to capitalise on an early man advantage.

The Stars then quickly regained their footing and stopped Belfast from finding a quick equaliser.

Although, the game-tying-goal would soon come and on 50 minutes, when Cam Knight’s shot snuck past a heavily crowded Morrison and upon review for goaltender interreference, the call on the ice would stand.

The first crucial stop saw Morrison use the toe of his pads to deflect the puck up and into his glove and the second saw him drop into the splits to deny the finish of a two-on-one break.

The 60 minutes of regulation soon expired and three-on-three overtime began but it only took the Stars three minutes to win the extra point.

The Giants got caught attacking deep in front of the Stars goal and Dundee’s Connor Sills grabbed a loose rebound and burst down the ice.

The big Canadian pulled some moves to shift Beskorowany off his line and finished by taking the puck around the goalie, before shooting high into the net.

The Stars gained a massive two points for their playoff push and now are aiming to capitalise on a potential four-point weekend.