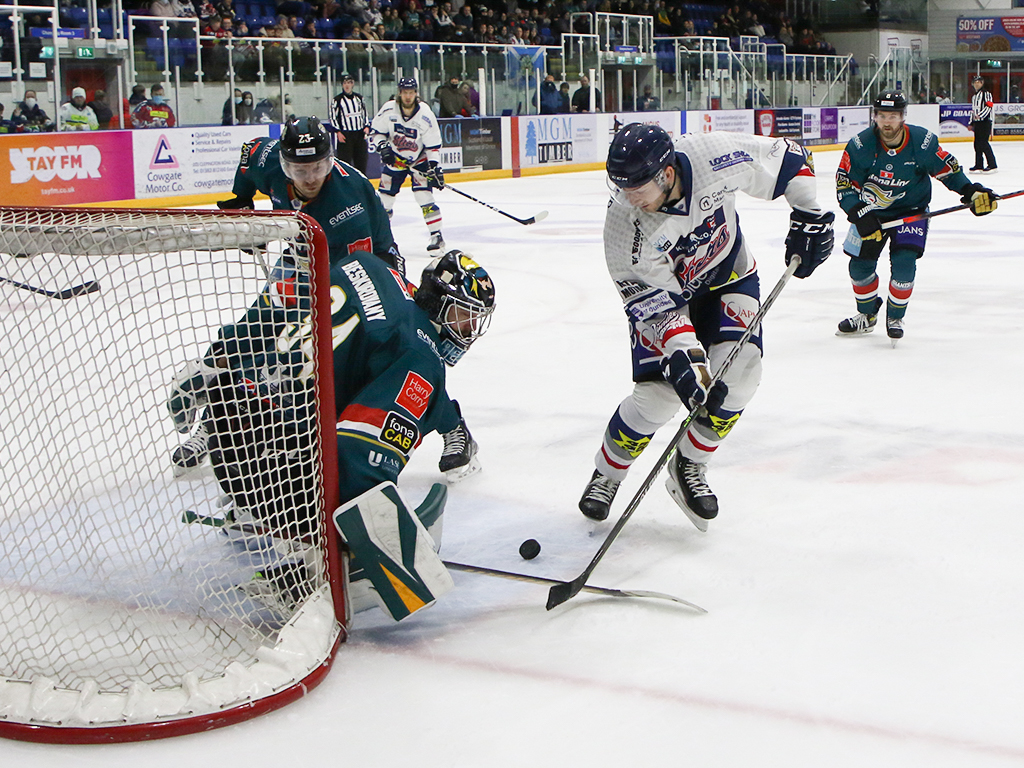 The Kitmart Dundee Stars fell victim to a vengeful Belfast Giants side who punished the Stars with a 7-0 thrashing on Saturday night.

Following Friday evenings 4-3 overtime win for Dundee, a very annoyed Belfast team came back to the Dundee Ice Arena with a vendetta and fully exercised any demons they had against the Stars.

The home side had lost dangerman, Charlie Combs and veteran defender, Markus Kankaanperä before Saturday’s rematch, meaning Caly Robertson would come back into the line-up.

It was once again a closely contested opening period and it also saw the Giants enter the break with the lead, however this time it was by two goals to nil.

Mark Cooper had opened the scoring on 13 minutes as he shot home a rebound from out wide following a big save by Adam Morrison and just four minutes later, Ben Lake converted on the powerplay to make it 2-0.

With Dundee captain, Drydn Dow in the sin bin for interference, the visitors capitalised on another rebound as they worked the puck across to the un-marked Lake, who waited-out the diving Kyle Haas before sliding the puck home.

In the second period, controversary struck and Belfast seized full control of the match, but not before Adam Keefe was forced to swap goalkeepers after Tyler Beskorowany injured himself while trying to play the puck, meaning Jackson Whistle was called off the bench to replace him.

A game-changing moment then occurred in the 28th minute as the Giants extended their lead to 3-0 with a second powerplay goal.

However, Dundee immediately called for a review of the play as they claimed Tyler Soy had clearly kicked the puck into the net and despite a lengthy review of the goal, the referees on ice decision stood – to the utter disbelief of Omar Pacha and his team.

The Stars appeared to have taken a blow to their morale after that call and that allowed the Northern Irish side to tighten their grip around the game’s neck and begin to choke out Dundee.

Just over a minute after they netted their third goal, Cooper made it four and secured his brace with a quick finish under the legs of Morrison.

Then three minutes after that, Soy was the next player to score his second and gave Belfast their third powerplay goal of the night.

Morrison had denied Slater Doggett’s slapshot but he was unable to prevent the rebound bouncing off Soy and defenseman, Kris Inglis’ and right back into the Stars net.

Dundee then lost a sixth goal on 35 minutes, as JJ Piccinich was the next to turn in a rebound after Morrison made the initial save.

Pacha then sent out back-up goalie, Brython Preece to tend the net for the third period and he would only lose one goal in a quiet final session.

Belfast’s Scott Conway would  round off the scoring at 7-0 with a first-time finish that snuck past the Welsh keeper down low on 56 minutes and that brought an end to a miserable and forgettable night for Dundee.

There is now only four days for the Stars to regroup and prepare for Wednesday’s visit of Cardiff Devils and they will be hungry to redeem themselves.