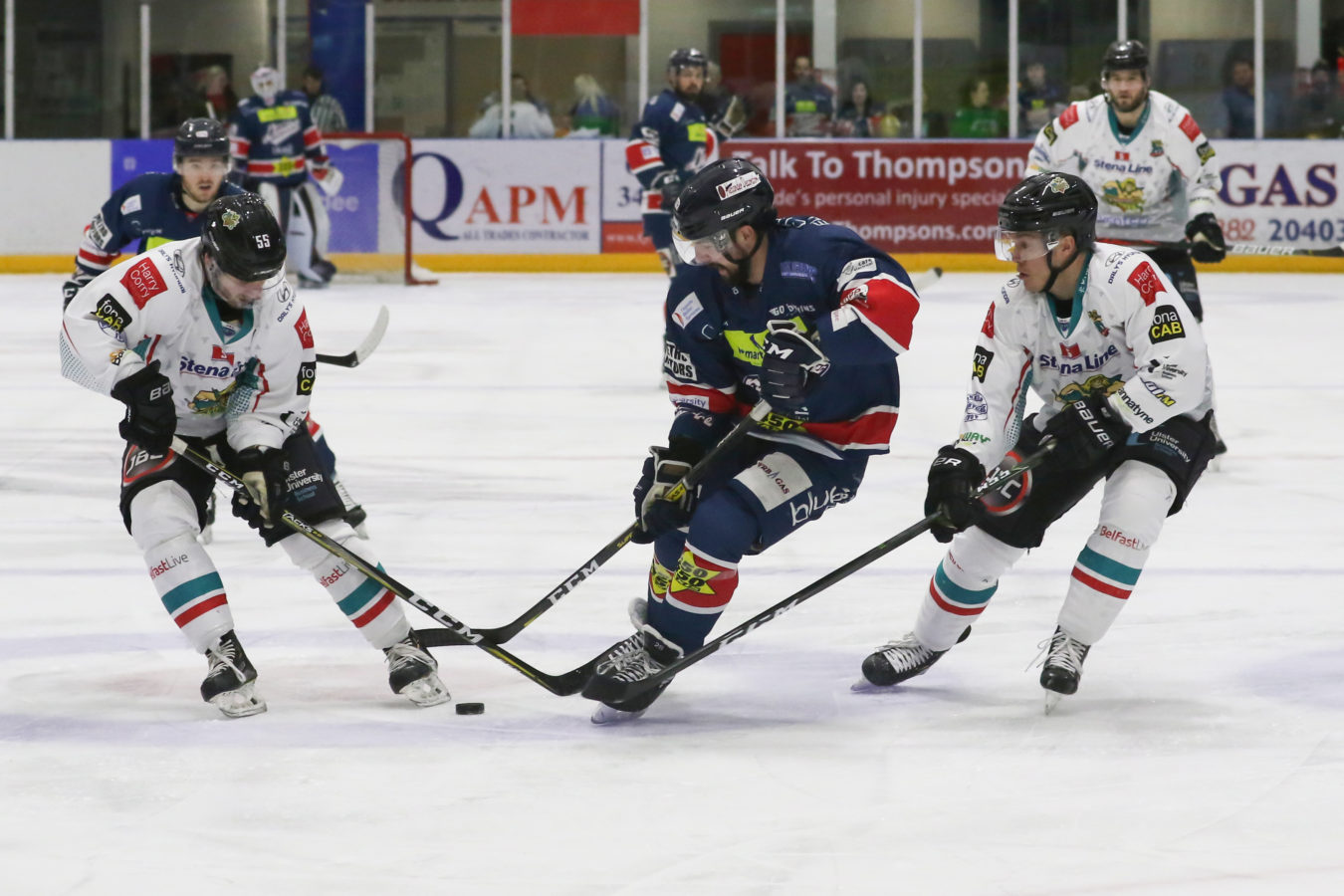 The Kitmart Dundee Stars put up a good fight against the current Elite League champions but were ultimately punished for a few mistakes.

The Stars were still missing defensemen, Kris Inglis and Shawn Boutin from their line-up and Belfast were only without defender Kevin Raine.

There was an extremely chance as in the opening 20 seconds, Elgin Pearce won possession for Dundee before skating the puck down the left wing .

The Canadian then passed to Anthony Beauregard, who flicked a shot on target but it was kicked away by Shane Owen in the Belfast goal.

However, the Giants were then on the attack as a too-many men penalty was called against Dundee in the third minute but despite the Northern Irish team looking dangerous, Dundee survived the full two-minutes.

The visitors continued to put the Stars under pressure for the next few minutes but the home team showed how they can be dangerous on the counter-attack as Pearce and Matt Marquardt managed to break up the ice but a trailing defenseman took the chance away from the Stars captain.

Brett Stovin then lead the next counter-attack as Dundee went forward again int he 10th minute but Owen was able to deny Stovin’s backhanded shot.

Although, Dundee were alive and that set off a string of assaults on the Belfast goal but Justin Maylan and Kevin Dufour also failed to beat the Giants netminder but did enough to force him into some difficult stops.

Omar Pacha’s Stars were dominant for rest of period but just could not get the puck past Owen and they were unlucky not to be ahead going into the first intermission.

Belfast’s Matt Pelech threw a late hit on Beauregard and sent him into the boards and that caused a stoppage as the Stars forward required some attention and was forced to head into the dressing room for further assessment.

There was no penalty called on the questionable hit in the 24th minute.

Even though they were another player down, Dundee continued to create chances and Reilly O’Connor picked out Jordan Cownie at the back post but the Dundonian put his shot just wide.

Stars forward, Egils Kalns was next to be denied before up at the other end, Jordan Smotherman saw Alex Leclerc stop his shot.

Int he 28th minute, Belfast’s Liam Reddox played in Brian Ward but he was also denied from close range as Leclerc made a crucial stop to keep the game scoreless.

The home team were defending well and were boosted by the return of Beauregard to the game but just as he stepped back out into action the Giants ended the stalemate.

It was who was in a dangerous position again and this time he found some luck as his shot was deflected up and into the net on 31 minutes.

The visitors nearly went 2-0 ahead immediately as Bobby Farnham’s shot was saved but the rebound dropped out in front of an open part of the net and that forced the Stars keeper to move quickly to kill the chance.

Dundee did tie in the game just two minutes later as Cownie cut the puck back to Drydn Dow as they approached the Giants goal and the Stars defender sent the puck into the top right corner.

Adam Keefe’s men responded with a few dangerous opportunities but the home team continued to look for quick counter-attacks.

However, Belfast punished the Stars with a quick break of their own as Patrick Mullen’s cross-ice pass found Curtis Hamilton at the backdoor and he blasted the puck in to restore the lead after 36 minutes.

The Tayside team then had to kill off another penalty as Stovin was boxed for hold his opponents stick but again the Stars held strong.

Although, just as the penalty expired, Curtis Leonard sent a shot in on goal that was stopped by Leclerc but with a bunch of bodies in front of him, the rebound fell perfectly for Smotherman, who just simply tucked it home with 35 seconds left to play in the middle session.

That late goal was a blow to Dundee’s confidence but Pacha was looking for his players to step up in the final stanza.

Keefe’s Giants started well in the third and forced Leclerc into an early save to deny David Goodwin and that big stop gave the Stars some momentum to get forward.

Maylan had a great chance in the 45th minute but his strike hit the post and that close call forced Keefe to use his timeout as he tried to settle his players down.

Both teams were exchanging scoring opportunities and the next goal would make a huge difference and Ward nearly found it as he combined with Reddox again but an aggressive Leclerc closed him down and made the save on another key chance in the 51st minute.

However, the Giants would get their fourth goal to make it 4-1 as Ryan Lowney spotted Patryk Wronka arriving late at back post and he was able to turn the puck in on 54 minutes.

Although 41 seconds later, Dufour gave a quick response for Dundee as he fired home the rebound of Dow’s shot that had sprung all the way out to Dufour who was lurking on the edge of the offensive zone.that comes out from Dow shot.

Straight from the restart, Dufour could have had another but saw his shot stopped by Owen and then a minute later, Stovin skated from his own end with pace and smashed a slapshot towards the Giants goal but he could not pull another back.

Inside the final 90 seconds, Leclerc was exchanged for the extra attacker after Pacha used his timeout to draw up a final plan of attack but neither side would net again and Belfast held on to claim a 4-2 win.

The Stars have Saturday night off but are on the road to Coventry Blaze on Sunday, face-off 5:30pm.