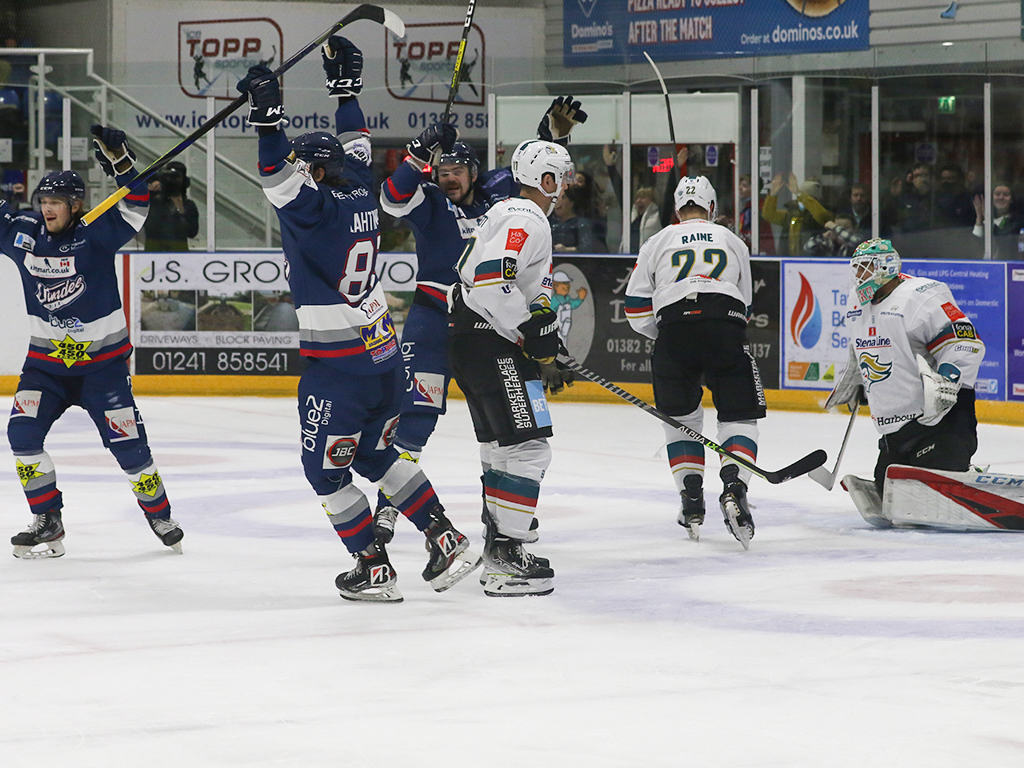 An short-benched Kitmart Dundee Stars welcomed Belfast Giants to the DIA for their first Elite League encounter of the season and both sides were desperate for a win that would move them up the league table.

With five import forwards missing from the Dundee line-up, including the injured; Philippe Sanche, Dillon Lawrence, Sebastian Bengtsson and Alex Ranger and also the suspended Connor Sills, the Stars still started off the strongest in the opening minutes.

After testing Belfast netminder, Tyler Beskorowany with a few early shots, the home side got the first powerplay of the night after the Giants were caught with too many men on the ice.

However, the game would still be in a stalemate two minutes later and the first period would be a tightly fought battle, with both clubs having some good chances.

Dundee then suffered another blow as center, Spencer Dorowicz left the ice to be treated in the locker room, but they would still go in to the first intermission locked at 0-0.

However, in the second period, the much fresher Belfast side finally opened the scoring on 23 minutes, as JJ Piccinich saw his backhanded effort deflect into the net via Dundee goalie, Adam Morrison’s stick and blocker.

Then just four minutes later, Ciaran Long made it 2-0 to the visitors, after some poor defensive work from Dundee left David Goodwin unmarked.

After Goodwin, was unable to score, Long was there to finish off the rebound and things quickly got worse for Omar Pacha as he lost defenseman, Kris Inglis after he landed awkwardly during a fall and had to be stretchered off.

Despite being now seven players down, the depleted Dundee side managed to make it a one-goal game as Toms Rutkis deflected Drydn Dow’s slapshot past Tyler Beskorowany.

The away side also missed the chance to make it 3-0, as Ben Lake was awarded a penalty shot after being fouled by Gabriel Desjardins, but he failed to beat Morrison.

Inside the final few minutes of the second period, tensions flared and Kyle Haas was sent off for charging, Belfast’s Jordan Boucher, giving the Giants a five-minute powerplay.

Adam Keefe was disappointed to not see his side make use of their long man advantage, even when Dundee were down to three skaters at some points.

Eventually, the Northern Irish side would get the killer-goal with six minutes left to play, as JJ Piccinich slipped his shot under Morrison, who had been plagued by injury in the build-up to the goal.

Following the Giants third, Brython Preece entered the Dundee goal for the remainder of the game and conceded 44 seconds later, as Cam Knight was left unmarked and beat the moving Welshman with a first-time effort.

The Stars finished the game with a just 11 players, but battled hard all night a put in a performance that their coach and fans were proud of.

Dundee now only have five days to heal up as best they can, as on Friday night, Cardiff Devils come to the City of Discovery, before they take  the long drive to Surrey on Saturday, to face Guildford Flames.