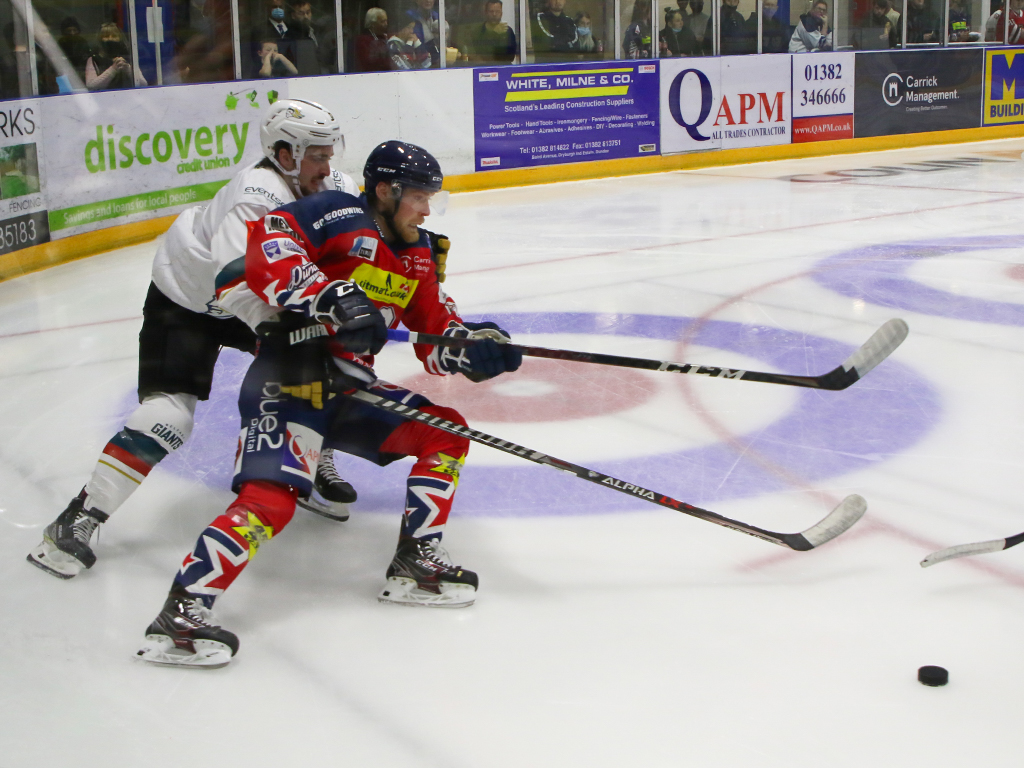 Dundee came out playing hard and fast, quickly getting the jump on Belfast, which resulted in Scott Conway being lured into giving away a poor tripping foul, inside the opening two minutes.

That early powerplay allowed Charlie Combs to blast home Michael Poirier’s past from the left flank and send the Stars into an early lead.

Omar Pacha would have been pleased to see his side start the better of the two after Belfast had a night off yesterday and the Stars had been on the road for two days.

The battles for possession soon became scrappy but that only sent the Giants into more penalty trouble as Ciaran Long soon picked up a minor penalty for tripping.

Dundee again looked dangerous on the powerplay, with Belfast defenseman, Jeff Baum making a crucial block to prevent a sure goal.

Although, seconds later, Combs netted his second of the evening with an accurate shot into the top corner of Jackson Whistle’s net.

Belfast continued to be punished by the referees but the Stars were unable to capitalise on three more powerplay chances.

More penalties were then dished out at the end of the first period, when a cheap shot by Harrison Ruopp on Dundee’s Philippe Sanche sent him to the sin bin and upon his return to action, he continued to harass the Stars.

Dundee’s Kyle Haas did not take kindly to Ruopp roughing up his teammates after the buzzer and stepped in to their defence, but in the process earned himself a two minute roughing call.

The Giants started the second stanza on the powerplay but failed to get off the mark, as the Taysiders produced a solid defensive effort and were backstopped well by Adam Morrison.

The next chance then fell for the Stars but a quick reaction save by Whistle kept Sebastian Bengtsson out on the 25th minute.

The British-Canadian netminder made a low pad save before the puck rolled across his equipment, forcing him to turn his body and send the puck away from goal.

There was then a massive momentum swing in the match as it reached the halfway point.

With Dundee a man down after Timi Lahtinen was punished for slashing, David Goodwin finally got the Giants off the mark.

The American forced a glove save from Morrison before chasing up the spilled rebound and driving the puck home at the right post.

The Stars looked to be in trouble when more penalties came against them but they managed to hold onto their slender lead whilst playing a man down.

However, with less than four minutes to play in the second period, Ruopp fired a long shot through traffic from the blueline and an unsighted Morrison was unable to stop it from hitting the twine.

With one crucial 20 minute period left, both teams needed the next goal and the Giants came out hard.

After a spell of domination from Belfast, there was a few minutes stoppage while Sanche was treated on the ice for a head injury.

The Canadian winger had clashed with Goodwin and had to leave the ice to get stitched up, but returned to action a few minutes later.

After more missed powerplay chances by both sides, the closest Adam Keefe’s men came to getting their first lead of the night was when Ruopp’s long range effort rung off the post of the Stars goalframe, on 50 minutes.

There would be a late and game-deciding goal in the 58th minute and it went the way of the home side, as Lahtinen broke down the left wing and beat Whistle over his left shoulder.

With Dundee’s lead restored, the Giants went all out and emptied their net in exchange for an extra attacker.

That then allowed Dillon Lawrence to control a mis-placed pass and send himself forward before finishing into a gaping goal with one minute left to play.

The Stars held on to claim a second straight win and it put them just two points behind the Giants in Group A of the Challenge Cup.