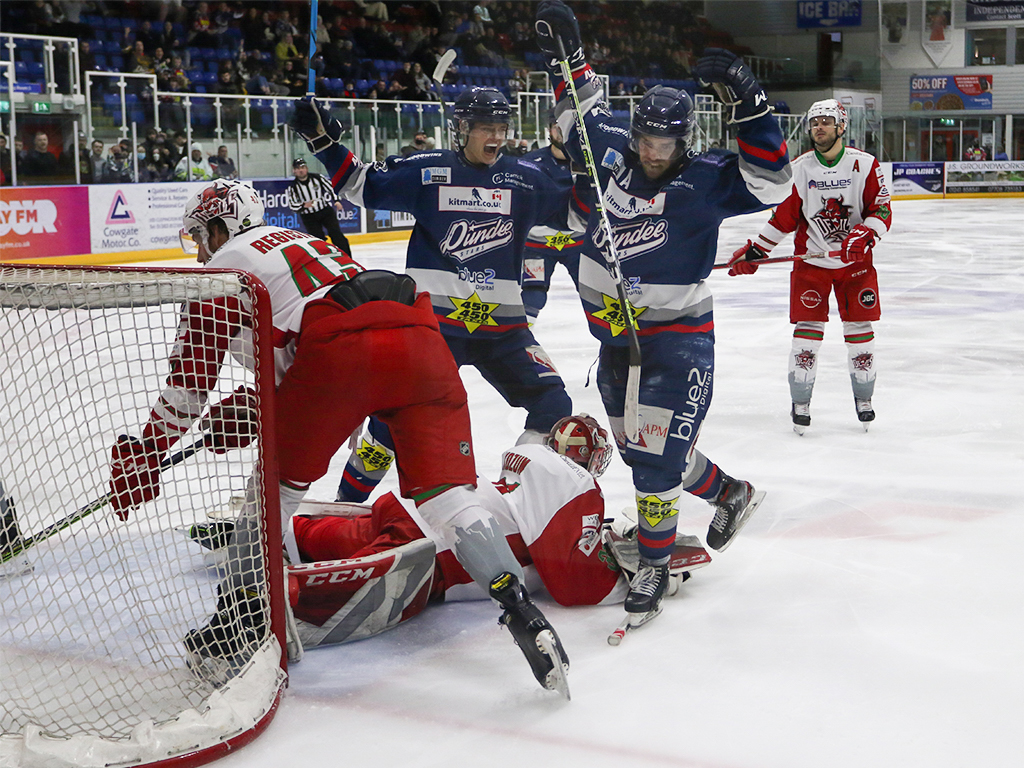 The Kitmart Dundee Stars made it four wins in a row as they downed Cardiff Devils 5-3 on Wednesday night and continued their climb up the league table, to move into sixth place after 38 games.

For once this season, the Stars outnumbered their opponents, as Cardiff arrived in Dundee with only 16 players, compared to the home side’s 18 and they also continued with Brython Preece in net after his top performances last weekend.

The crowd were quickly welcomed into the game as Dundee’s enforcer, Kyle Haas dropped the gloves with Cardiff Mark Louis after just 39 seconds and the pair had a brief battle of blows, before Haas sent put his opponent on his back.

With the atmosphere set, the Stars then pushed on and opened the scoring on five minutes, as they capitalised on some extra space with both teams down to four skaters.

Gabriel Desjardins fired the Taysiders ahead with a low shot to the near post of Taran Kozuz’s goal and the attack stemmed from a quick counter-attack by Dundee that saw Desjardins and Combs break away on an odd man rush.

Desjardins soon had a chance to grab a second just moments later but he could not connect cleanly with the rebound of Combs shot and the chance was gone.

Although the Canadian winger did eventually get his second of the night on 13 minutes, when he saw his shot ping off the Cardiff goalie and defender before landing in the back of the net, to double the Stars advantage.

Dundee had there issues with staying out of the penalty box and it would cost them in the final few minutes of the opening period.

With Quinn O’Brien serving a two minute minor for tripping, Devils forward, Riley Brandt was able to convert on the powerplay and beat Brython Preece with a shot from the top of the left circle.

Omar Pacha’s men would then enter the real battle with the Devils as both teams searched for control of the match in the second stanza.

Neither side would net a game-changing goal through the first 15 minutes of the period, but as the penalties continued to be called against both teams, each would eventually suffer at the hands of their own ill-discipline.

The Stars were first to dish out punishment as Combs made it a three-point night for himself, by adding a goal to two assists, in the 38th minute.

As Cardiff’s Joshua Batch watched on from the sin bin, the Stars American forward cut down the left wing before rifling a shot into the top of the net, giving Kozun not chance to even move.

Although, just seconds after the restart, Dillon Lawrence was called for a hooking foul, putting the Welsh club in a perfect position to answer straight back and that they did, with just 19 seconds left on the clock.

Mark Richardson saw his shot fly through a traffic jam in front of the Dundee goal before landing in the back of the net, as it snuck past the unsighted Preece.

In the third period, the tension of battle continued, as did the penalties.

After just one minute, Batch found himself back in the box after he shoved Dundee’s Philippe Sanche into the goalframe after the whistle and that allowed Spencer Dorowicz to restore the Stars original two-goal lead, on 42 minutes.

The Canadian beat Kozun with a quick touch to turn home the rebound of Drydn Dow’s shot, although the lead was soon cut back down to one again, as Trevor Cox turned an interception into a goal, in the 52nd minute.

The home team did not allow the late pressure from the Devils to crack them and quickly restored their two-goal cushion on 56 minutes, as Sanche beat the Cardiff netminder with a laser-accurate finish off the underside of the bar.

Despite a late gamble from Jarrod Skalde as he swapped his keeper for an extra attacker, Preece and the Stars continued to shut down the Devils and held on to claim their fourth successive win.

Dundee now head on the road to face Glasgow Clan this Saturday in the first of double-header weekend against their Scottish rivals.