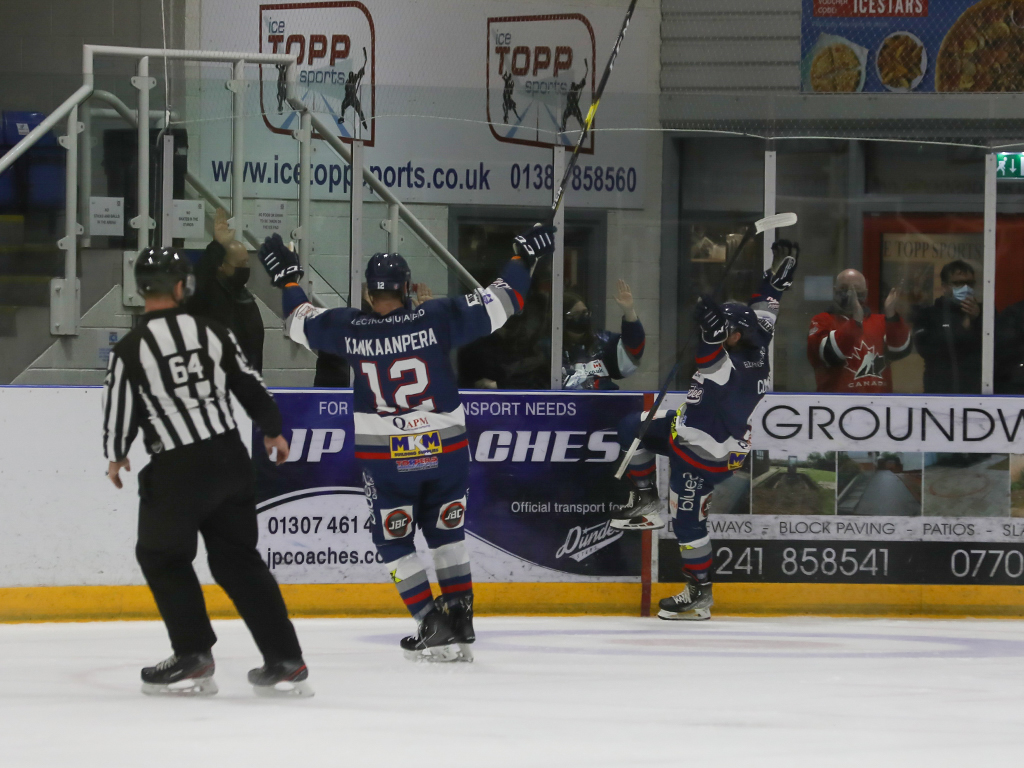 The Kitmart Dundee Stars pulled off a massive upset as they claimed a crucial 3-2 win over Cardiff Devils and that has lifted them back into the playoff spots.

The Stars received positive news just before face-off as star forward, Charlie Combs was cleared to play and he joined veteran defenseman, Markus Kankaanperä in making their return to the line-up.

However, the visitors were quickly given an opportunity to kill the noise of the home crowd as they were awarded a powerplay after just 16 seconds.

Dundee’s Philippe Sanche was boxed for tripping but the Devils failed to find an early goal on that and another man advantage just a few minutes later.

The Stars then wasted a powerplay of their own in seventh minute but were generating more and more counter-attacks as the first period went on.

After numerous opportunities and several key saves from Mac Carruth in the Cardiff goal, Dundee eventually found the break through in the 16th minute.

Timi Lahtinen picked off the pass from Cardiff’s Trevor Cox and quickly played in Sebastian Bengtsson, who took the puck around the keeper before tucking in his 17th of the season.

The Tayside team held the lead into the first break and continued to have the better chances in the opening minutes of the second stanza.

Despite a jam-packed goalmouth, the Stars were still finding ways to get shots on target and the Devils netminder was struggling to contain the rebounds.

The home team’s continued efforts soon paid off and they were rewarded with a second goal at the halfway-mark.

After winning the puck back in their own, Kankaanperä released Spencer Dorowicz with a sharp pass and the Canadian center carried the puck down the left wing.

Dorowicz then released a low wrist shot that cannoned off the leg pads of Carruth and into the path of the arriving Combs, who easily slotted home past the diving goalie.

Although, all the momentum Dundee had built soon vanished as boarding call against Quinn O’Brien put the Stars back down to four men for two minutes.

The Welsh side again failed to make the Stars pay for their poor discipline and they had Adam Morrison to thank, after he pulled off a number of key saves and was aided by some premature whistles from the referees.

Omar Pacha was visibly delighted that his side kept their 2-0 lead intact heading into the third period and he was overjoyed as Bengtsson converted another turnover on 43 minutes.

The Swede blocked a shot by Register and immediately broke down the ice before coolly sliding the puck between the legs of Carruth.

The Stars then remained on top up until the last five minutes when Cardiff coach, Jarrod Skalde rolled the dice to get a spark from his team.

The Devils emptied their net to get an extra attacker and after pounding the Dundee net with shots, Brodie Reid finally broke through the Stars defence and saw his shot deflected in on 56 minutes.

Cardiff then continued to go all in and swapped their goalie once again and once more they would be rewarded for their heavy pressure, with Reid converting again with less than 90 seconds to go.

However, the Stars stood firm to clinch the two valuable points they needed to restart their playoff push and now they have just two days to prepare for the weekend as they go on the road and visit Glasgow Clan and Manchester Storm in an attempt to start a winning streak and continue their climb up the Elite League table.