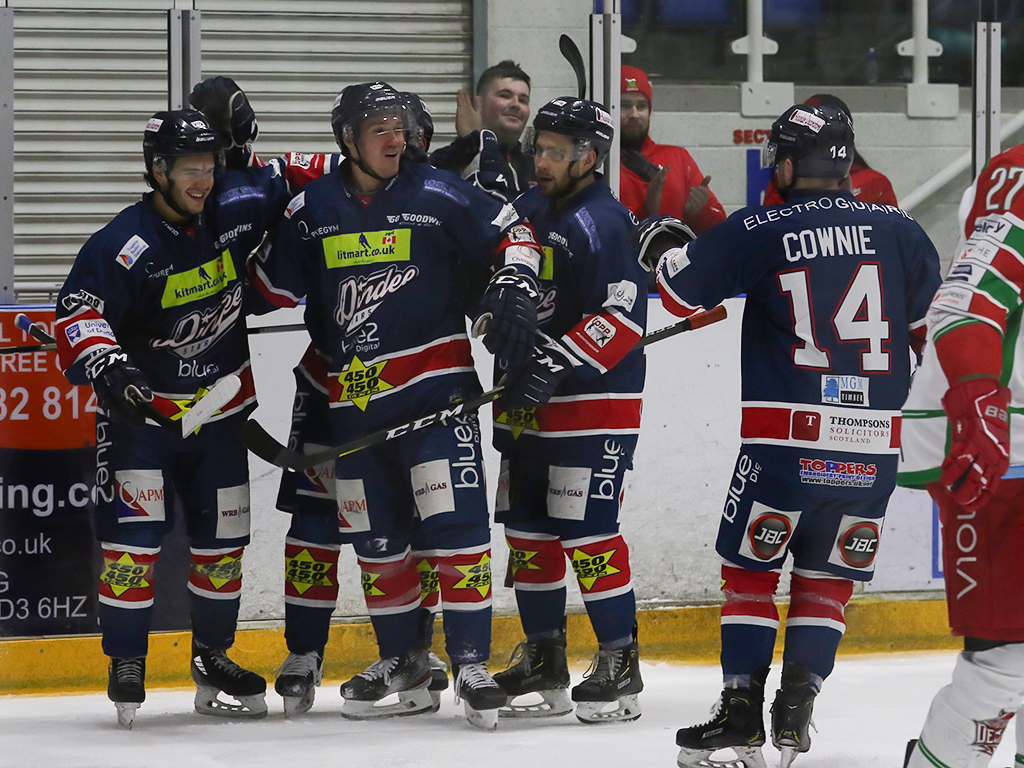 The Kitmart Dundee Stars needed to bounce back with a win against Cardiff Devils on Sunday night to close the gap between them and the playoff spots and they made the best possible start as they found themselves ahead inside the opening two minutes.

Winger, Egils Kalns forced a turnover in the neutral zone and broke into the Devils end down the left wing before cutting into the middle of the slot and beating Ben Bowns with a low shot through his five-hole.

Cardiff’s Masi Marjamaki was the first player to be penalised in the match as he was caught hooking Dundee’s Anthony Beauregard as he tried to get a shot off in the offensive zone.

Although, the powerplay did not last long as the home side had the puck in the net 18 seconds into their man advantage.

Beauregard played in Kevin Dufour and he slipped through the middle of the Devils defence before he slid the puck between the legs of Bowns to double the lead on six minutes.

Both sides had chances through the rest of the period but Dundee remained on top and continued to threaten the Welsh side as they kept finding ways in behind.

The first period ended with the Tayside team still 2-0 ahead but the Welsh outfit had a chance to cut into that lead early in the second session as the Stars captain, Matt Marquardt was punished for a hooking foul in the 22nd minute.

However, Dundee killed off the penalty with ease and then had a chance to add to their lead on 24 minutes.

Jordan Cownie had chipped a pass through to Matt Carter, sending him in behind and he tried to fake a shot and fool the Devils netminder but Bowns fell backwards expecting a hard shot and still managed to get his leg behind the puck to keep it out.

Although, the pressure on the Cardiff could not be relieved as a five-on-three powerplay followed for Dundee as Joey Haddad and Mathew Myers both picked up minor penalties 15 seconds apart.

With the two man advantage, the Stars were able to find a third goal in the 27th minute through Matt Carter.

Dundee worked the puck around the Devils zone well before Jagger Dirk sent a pass across to Carter, who was standing to the right of the goal and he quickly slung the puck high into the net before the keeper could get across.

Devils defenseman, Gleason Fournier was able to beat a screened Alex Leclerc in the Dundee goal when he flicked a shot from the top left corner of the Stars end and the shot made its way through traffic in front before going under Leclerc.

The visitors were again on the powerplay as Drydn Dow was sent to the sin bin for shooting the puck into the crowd but during the kill, Dundee lost Craig Gans to injury as the defender blocked a shot with his arm and was clearly in a lot of pain.

Gans did not take play for the rest of the period but his teammates managed to see out the penalty and they killed off another one late in the game as Beauregard was deemed guilty of high-sticking in the 37th minute.

Although, the Devils had a goal waived off during their powerplay, as Stephen Dixon was judged to have deflected a shot in from above crossbar height.

Another late call meant that the home side would start the third period with a man advantage as Cardiff’s Mike McNamee was sent to the box for delay of game with 39 seconds left in the second stanza.

The third period began with the Devils seeing out the penalty but Dundee were boosted by the return of Gans as he came back into action.

However, their defences were tested again as Marquardt picked up a four-minute penalty for high-sticking in the 47th minute and this time Cardiff made it count.

The Devils pulled it back to 3-2 after Fournier’s off-target shot from just inside the blueline bounced off the end boards and hit the skate of Leclerc before ending up in the Stars goal.

A bit of puck luck had brought the road team back into the game and they still had just under two minutes left on the powerplay but Dundee managed to keep them out until they returned to full strength.

Just as Marquardt was released from the box, Stars forward Colton Kroeker made a break down the right wing and at the last second,  he squared a pass across to Beauregard who was able to turn the puck in at the back post on 50 minutes.

Omar Pacha’s men could not capitalise on another powerplay chance but once the clock had ticked down to the final two minutes, the Cardiff coach swapped his goaltender for an extra attacker but that only allowed Marquardt to fire into an empty net to seal a 5-2 win for the Stars.

Two big points against a top two team has helped Dundee keep the gap to just two points between them and the playoff spots and next weekend can be huge for the Stars.

They face Glasgow Clan at home on Friday night as they kick-off the Elite League’s first ever Pride Weekend and then on Sunday they travel to face Manchester Storm, the side currently occupying the final playoff spot.