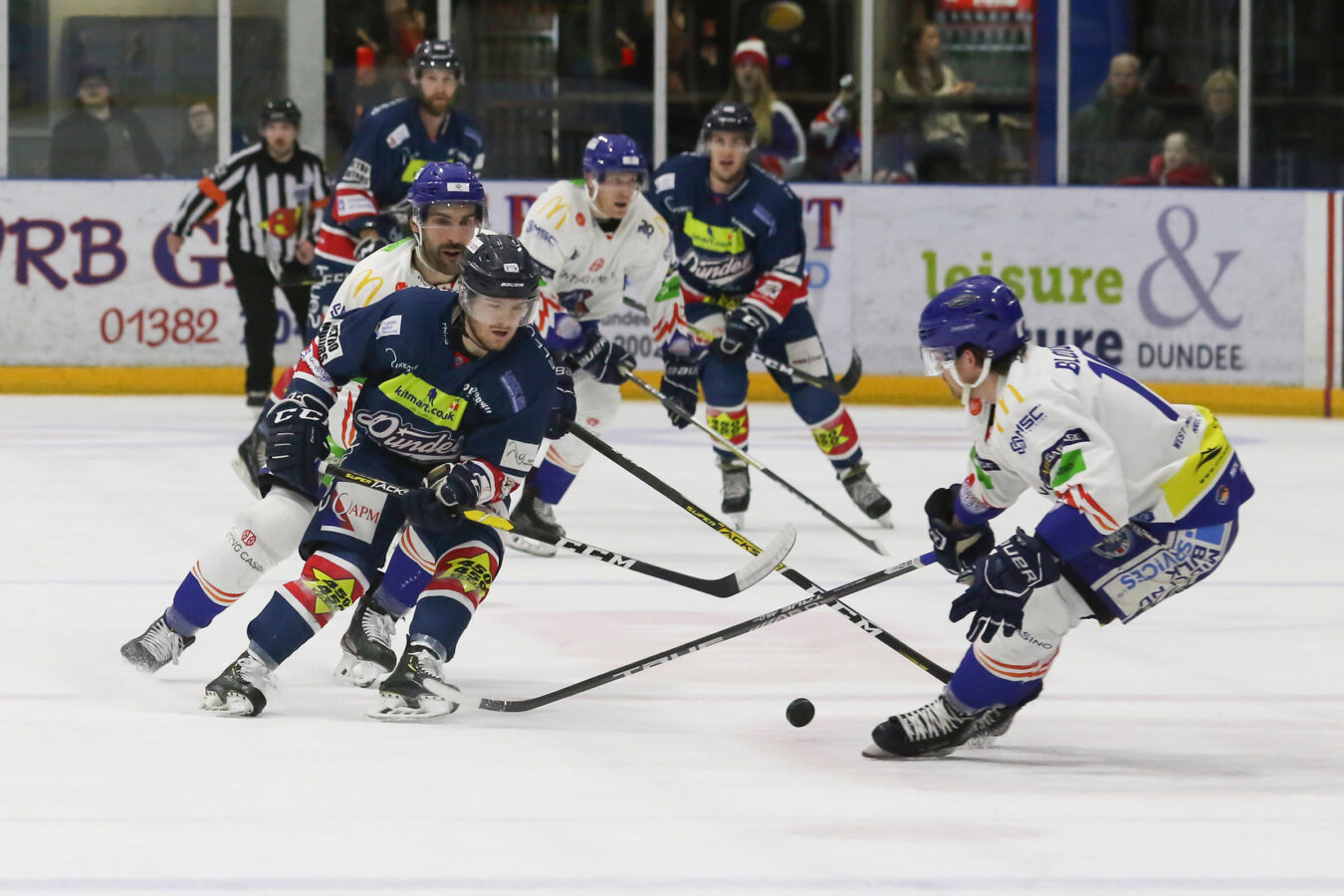 The Kitmart Dundee Stars came into Sunday’s match another defenseman down as Shawn Boutin joined Kris Inglis on the injured reserve after picking up an upper body injury on Saturday night against Fife Flyers.

However, the Stars started strong and immediately went forward from the opening draw.

They created the opening scoring chance within seconds as Colton Kroeker and Kevin Dufour attacked the Blaze goal but despite Jamie Phillips spilling the rebound of Dufour’s shot, the danger was swiftly cleared.

The home side dominated possession for most of the first five minutes, although Coventry did have one chance on the counter-attack but they would not to test the Stars keeper.

After the Stars long period of pressure ended, Blaze forward, David Broll could have buried his shot into the top corner but instead sent his effort over the bar after a quick cut back pass from his teammate.

Dundee quickly ended up in penalty trouble as Justin Maylan was caught tripping up his opponent in the sixth minute but it was surprisingly the Taysiders who went on the attack.

A bad pass from Blaze netminder, Phillips was intercepted by Kroeker and he played a pass across to Brett Stovin but his effort from far out was not on target as Phillips rushed back to his net.

Anthony Beauregard then joined Maylan in the sin bin as he was also penalised for tripping Drew Schiestel, with just under a minute left on the powerplay.

Despite their short two-man advantage, the team from the West Midlands opened the scoring.

Luke Ferrara was sitting low to the left of the Dundee goal, where Charles Corcoran picked him out and the Brit hit the pass first-time to send it past a moving Alex Leclerc.

There were a bundle of chances for the Stars to score but they could not get a strong enough touch on any of the loose pucks before the defence scrambled the danger clear and that allowed the Blaze to break with a three-on-one advantage.

Although, the Stars keeper came to the rescue as he turned Dillon Lawrence’s shot away and that would be enough to keep the score at 1-0 going into the first intermission.

Dundee started the second period on the powerplay as Broll was punished for a late hit at the end of the first but the home side could not take advantage of the extra man opportunity.

Broll did have a chance to increase the Blaze’s lead when he exited the penalty box but he could not get the puck past Leclerc and the Stars shot-stopper did well over the next few minutes as he faced a few more shots.

However, Leclerc could not keep out Corcoran’s effort in the 25th minute, as the former Star pinged a shot straight into the top right corner from 10 yards in front.

Danny Stewart’s squad quickly made it 3-0 as Evan Bloodoff turned in Johnny Curran’s squared pass at the back post, two minutes after the last goal.

Dundee responded well and continued to create scoring chances but Phillips was making the stops and the Stars were second to every rebound.

The action then went from end to end with both teams giving up some opportunities but the momentum swung back in favour of the road team ad Dundee’s Jagger Dirk was boxed on an interference call in the 32nd minute.

The Stars did manage to kill the penalty and began to push for a breakthrough again and they finally found a way past Phillips after 37 minutes.

Dufour circled the Blaze goal before sending a pass out to Drydn Dow on the blueline, the defender then took a step in and rifled a shot straight past Phillips and all the traffic in front of the goal.

The goal gave the Scottish side a boost right before the end of the period and they had a few more opportunities but would still trail by two going into the final period.

Both teams could have potentially netted an early goal but each goalie was standing firm, however, an awkward bounce off the glass behind the Dundee goal gave the Blaze their fourth of the night.

A high and wide shot rebounded off the glass and landed in the right spot for Ferrara, who slung a wrist shot past an off-set Leclerc on 45 minutes.

The Stars then were handed another powerplay chance as Schiestel was sent to the box for a tripping foul, 20 seconds after the goal but even with a few good chances, Dundee’s powerplay unit continued to falter.

Dufour and Kroeker both saw their efforts blocked but the rebound landed just behind Beauregard as he faced a gaping goal and the Coventry defence wasted no time in sweeping away the danger.

The visitors moved 5-1 ahead after a defensive error by Dirk, which allowed Lawrence to skate onto a loose puck and he dispatched it to the right of Leclerc in the 52nd minute.

The Stars were still fighting on and managed to cut the deficit, after blocking a shot in their own end, Maylan took the puck forward and passed across to Matt Marquardt.

The Stars captain waited out two defenders until they dropped low before sending a low wrist shot past Phillips in the 55th minute.

Coventry began to look a bit frantic at the back and that led to Stewart calling a timeout with just over two minutes left, as he tried to settle his team down.

Although, Marquardt pulled it back to 5-3 with 14.2 seconds left to play.

Maylan picked out his line mate again and this time, Marqaurdt slapped the puck first-time with his stick and it flew past the Blaze goaltender.

Dundee could not add any more before time ran out and that loss confined them to the bottom of the Elite League table for another week and extended their losing run to four games.