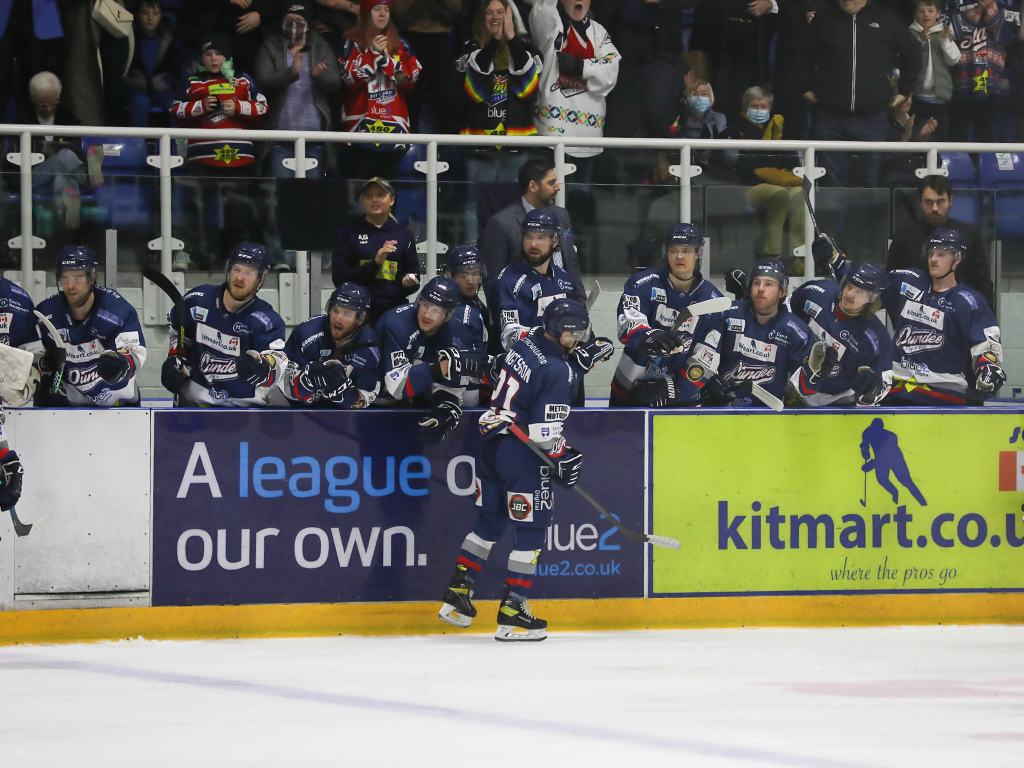 The Kitmart Dundee Stars came back from an early setback to overcome Coventry Blaze on home ice and keep them in the running for a place in the top five.

After only three minutes of play, the Stars had been the side that created the most offensive pressure and forced a few crucial stops from CJ Motte, but the Blaze keeper was nowhere near Spencer Dorowicz’s effort that just crept past the post and wide of the target.

However, the Blaze ignored the pressure they were under and took the lead on four minutes through Janne Kivilahti as he had time and space in front of the Dundee goal, to shoot past Brython Preece.

The visitors then had a two man advantage for over a minute as the Stars fell into penalty trouble but Preece was not up for letting anything else past him and produced save after save.

Just as the Tayside team returned to full strength, they broke down the ice and nearly tied the game as Gabriel Desjardins saw his first effort saved and deflected into the air.

The Canadian winger then cradle the puck as it dropped before playing it between his legs to Dorowicz, who would again be denied by the Coventry keeper.

Omar Pacha would have been pleased by the pressure his team created for the final half of the first period and twice the Stars had claims for a goal.

The first claim came in the 13th minute, after Kyle Haas drove towards the Blaze net at pace and flicked a shot goalward that slipped past Motte.

Then, just as it was rolling across the line, the American goalie snatched it up and it was ruled a no-goal.

Although, the Stars definitely had the puck in the net in the final minute of the opening session, as Philippe Sanche jabbed home a loose puck, but a premature whistle from the referee meant it would not stand.

The Blaze still had their narrow lead heading into the second and were put under more heavy pressure by Dundee for the next 20 minutes.

The Stars work ethic was clear to see and their determination was soon turning to frustration as  the Coventry defensive structure looked to be flawless.

However, just before the halfway mark, Sebastian Bengtsson used raw finesse and laser-type accuracy to pick out the top left corner of Motte’s goal from distance, giving his opponents no chance to deny his spectacular effort.

The home side quickly built on this and soon hemmed the Blaze into their own end and began to find their weaknesses.

On 33 minutes, Philippe Sanche put Dundee ahead as he got enough on a cannon-like shot from Kyle Haas to turn the puck down and under the legs of Motte.

The Stars still had to fight off some penalties that gave the West Midlands club some chances to regain control of the match but it would still be Dundee who led going into the final intermission.

The third period would be a heated battle and tight contest as both teams pushed for the game-deciding goal, however there would be no goals and only penalties as poor discipline cost both teams their chances to build any momentum.

Despite a late push from the Blaze, the Stars held strong to secure two more points that keep them tied on points with Glasgow Clan, the current occupiers of fifth place in the Elite League standings.

However, the Stars still have a game in hand and will face the Blaze again next Friday on home ice, as the club host their 00’s night.