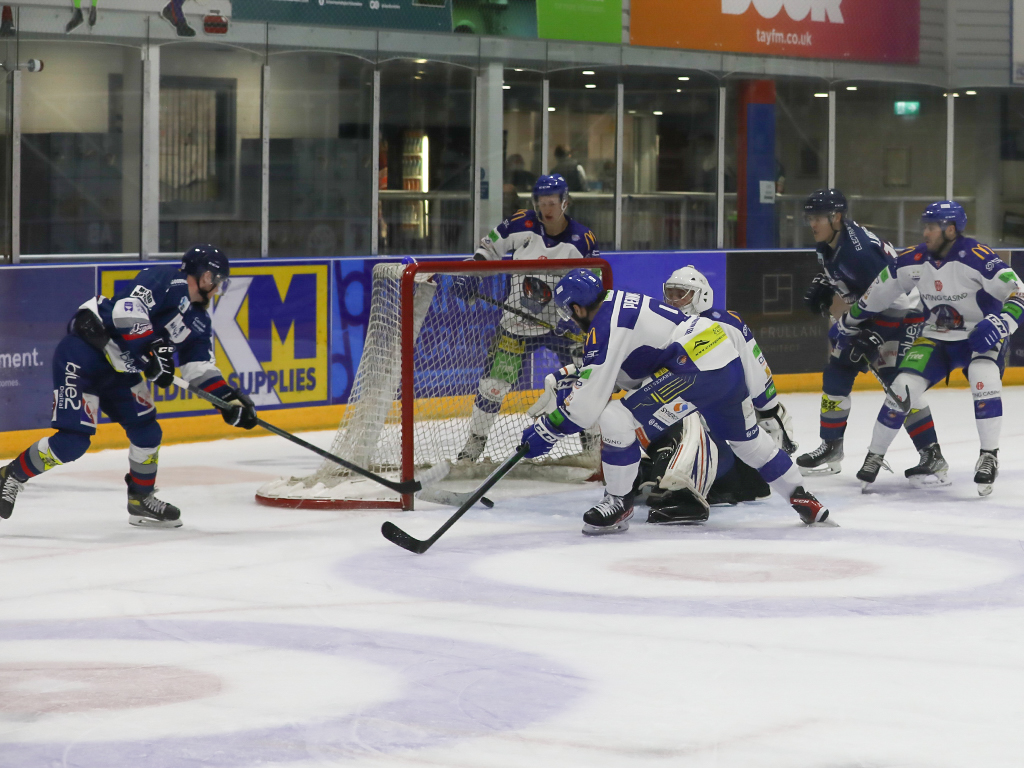 The Kitmart Dundee Stars were looking to bounce back from their Challenge Cup exit with a crucial home ice win against Coventry Blaze on Saturday night and the Stars did not get the best of starts.

Shortly after Coventry’s Evan Bloodoff rattled his shot off the Stars goalpost inside the opening minute, Dundee’s Charlie Combs was penalised for a hooking foul.

Despite having a big chance to punish the home side with an early man advantage, the Blaze struggled to get their shots off and saw their powerplay waste away.

The Stars then also got a powerplay of their own as the English outfit were caught with too many skaters on the ice, but the match would remain scoreless.

In the eighth minute, Janne Laakkonen was the next Coventry forward to strike the Stars goalframe and following that close call both teams raised the tempo and the pace of the game, taking the puck from end-to-end at high speed.

Dundee then found themselves a man down once again, as defenseman, Markus Kankaanperä was given a roughing penalty after trying to free his trapped stick from underneath a Coventry skater, on the 10-minute mark.

Dundee-born forward, Craig Garrigan and his teammates then put their bodies on the line to block a handful of shots, with the 23-year-old making a critical stop towards the end of the powerplay.

Danny Stewart’s men then quickly found themselves in a heap of trouble as Kankaanperä’s exit from the penalty box sprung a surprise Stars attack but a last ditch block by a Luke Ferrara sent the shot of Timi Lahtinen out of play.

Two very soft penalties were then awarded against Dundee in the dying minutes of the opening period and in between Ferrara would waste a wonderful chance to put the Blaze ahead, as he lifted his shot over the gaping Stars goal.

Despite the Stars being two players short for 45 seconds and spending the rest of the period on the penalty kill, they kept the game in a stalemate until the first buzzer.

The second period saw the two teams continue to frustrate each other and keep the game tied for at least another 15 minutes, as both goalies and defensive units continually produced what was required.

Dundee shot-stopper Adam Morrison then came up with a ‘save of the season’ candidate as he faced a three-on-one attack from the Blaze and made a sprawling stop to keep the puck out.

The Taysiders then showed off some flashy skills at the other end as Dillon Lawrence touched down a puck in mid-flight to take himself and the puck past two defenders and in on goal.

The Canadian center then failed to make his chance count as he could not get enough power behind his shot to trouble CJ Motte in the Blaze goal.

Then just moments later, Lawrence redeemed himself by assisting the first goal of the night, in the 38th minute.

Following a shot on target from Alexandre Ranger, Lawrence then batted the rebound back towards goal, where Motte would save before allowing the rebound to drop at the back post for Sebastian Bengtsson to poke home.

Dundee kept a hold of their slender lead heading into the third period and had a few chances to extend it early on in the final stanza.

Spencer Dorowicz saw the first major chance of the third period slip away from him as he could not connect with a fast pass in front of goal, on 42 minutes.

A few moments later, he then sent a long-range pass forward to Charlie Combs, sending him through on goal but the American’s effort would be saved.

The home side were then given a short five-on-three powerplay, where Omar Pacha called a timeout to draw up a plan, but their short 30 second advantage would not be capitalised on.

Although, with time still remaining on the second penalty, the puck became trapped on the back of the Blaze goal netting and as a scramble ensued to free it, Coventry players began to call for a whistle.

No whistle came and seconds later, the puck sprung out in front of goal and the waiting Ranger then fired it straight into a heap of bodies, before it landed in the back of the net on 51 minutes.

The momentum of the match then swung towards the Blaze as tensions flared on the ice after a few boiling points, but Dundee’s Kankaanperä would be the only player punished by referees Robin Elliott and Pavel Halas.

With the West Midlands club on a four-minute powerplay, Stewart watched his side struggle through the first half before calling a timeout of his own and gambling with just less than five minutes remaining.

The Coventry goaltender was benched, so that they could create a six-on-four situation, in the hope of getting a late goal to kickstart a comeback.

However, 20 seconds later the Stars wrapped up the game.

In the Stars end, Dorowicz and Ranger put pressure on the Blaze, forcing a turnover and that allowed the pair to brake down the ice before Dorowicz fed a pass across to the wide-open Ranger, who buried his shot into the empty net.

Connor Sills would then have the final chance of the game as amongst calls for a foul on a teammate, he took the puck forward and had a shorthanded breakaway against Motte, but he could not make it 4-0.

An outstanding defensive performance produced a clean sheet for the Stars and two crucial points, as the team turn their attention to the visit of Sheffield Steelers tomorrow.

Reflecting on a successful night, Head Coach Omar Pacha said: “It was a slow start but we had really solid goaltending all-night and a solid PK to match!

“I thought out defensive performance won us the game, then some clutch scoring at the end of the second and a big powerplay goal in the third got us over the line.

“But certainly, this win is because of how we played defensively and our penalty kill definitely won us the game.”

Double goal scorer, Ranger then shared his delight with the team’s performance and his own contributions, adding: “Obviously Mo (Adam Morrison) did a great job tonight – he stopped everything.

“The defence played well too, they cleared the front of the net so Mo could see the pucks but I was delighted to get some big goals for the team.”