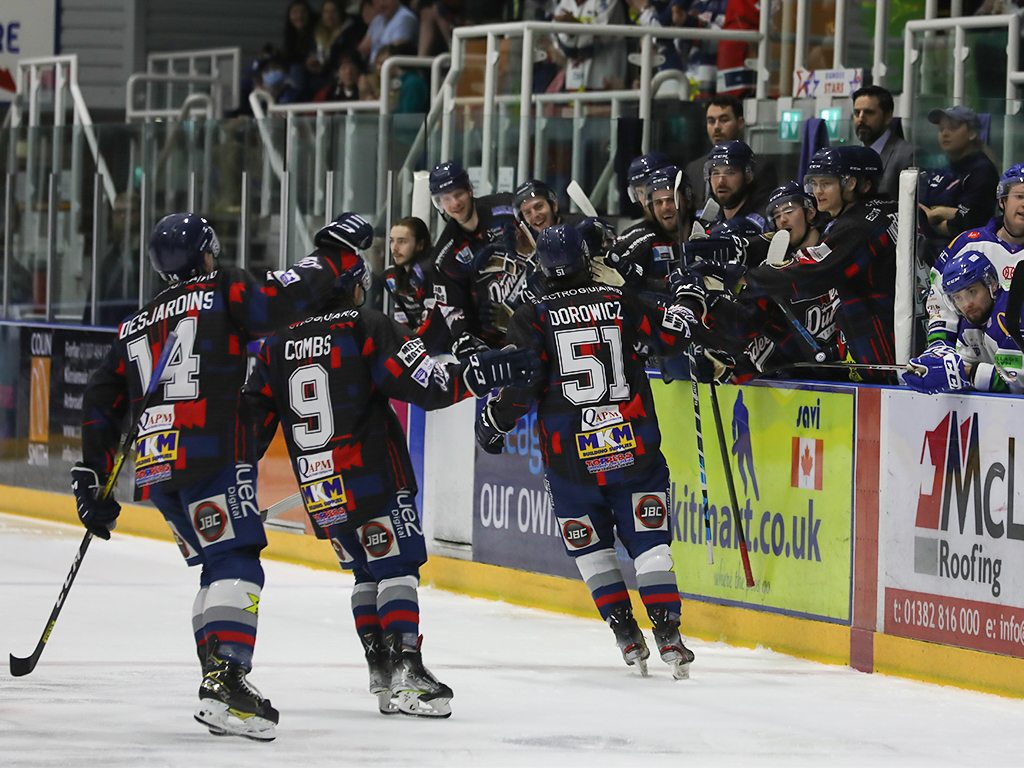 The Kitmart Dundee Stars triumphed over Coventry Blaze on home ice for the second time in just five days as they claimed a crucial 4-1 victory to further progress their hopes of achieving a top five finish.

The Stars were missing their captain, Drydn Dow and forward, Toms Rutkis through injury but that did not stop them from storming into an early lead.

After only just three minutes of play, Spencer Dorowicz smashed home the rebound of Charlie Combs shot to put Dundee ahead and the Blaze quickly found themselves in danger again.

A hooking call against David Clements put them down to four skaters and that gave Dundee plenty more opportunities to extend their lead.

Then in the 5th minute, Combs broke clear of everyone else and slotted the puck past CJ Motte to make it 2-0 to the Stars.

The home side looked to be cruising and well in control for the rest of the first period, but tensions flared after some big hits by each side.

One hit along the boards by Coventry’s Dane Gibson took Craig Garrigan out of the game with an upper body injury and inside the final minute of the first session, Nathaniel Halbert had a scrap with Combs behind the play.

The pair had collided along the boards and continued to nibble at each other as play carried on but eventually Halbert took exception to something and charged down Combs, sparking a full 1o-man pile-up.

In amongst all the carnage, Dundee’s enforcer, Kyle Haas rushed in to protect Combs and got involved with Halbert, prompting an automatic expulsion from the game for Haas.

The second period resumed in a much calmer manner and both teams were working hard to find the next goal.

The hard-hitting physical play continued but there was yet to be another boiling point, however all the hard work from Danny Stewart’s men to get back in the game soon looked to be wasted as they gave up a third goal.

After the shot of Combs was lost in traffic, the puck eventually sprung back out from a pile of bodies and straight into the path of Dundee’s Michael Poirier.

The Canadian defender quickly wound up and unleashed a rocket into the top right corner of Motte’s goal to make push the Stars further ahead on 33 minutes, with another powerplay goal.

The Tayside team would maintain their three goal advantage heading into the third period and quickly added to.

Within just two minutes of play, the Stars broke up plenty of Coventry passes in the Blaze end and Timi Lahtinen would quickly find Sebastian Bengtsson unmarked at the back post and the Swede easily slotted home to make it a 4-0 score.

There was no real fight back from the West Midlands club as they looked to have succumbed to the result, although Luke Ferrara did net a consolation goal six minutes from time to spoil a perfect comeback for Adam Morrison.

A 4-1 win moved Dundee back into fifth spot in the Elite League table and gave them the best possible start to their three-game weekend, with the Stars now heading south for Guildford Flames on Saturday and then a rematch with the Blaze in Coventry on Sunday.