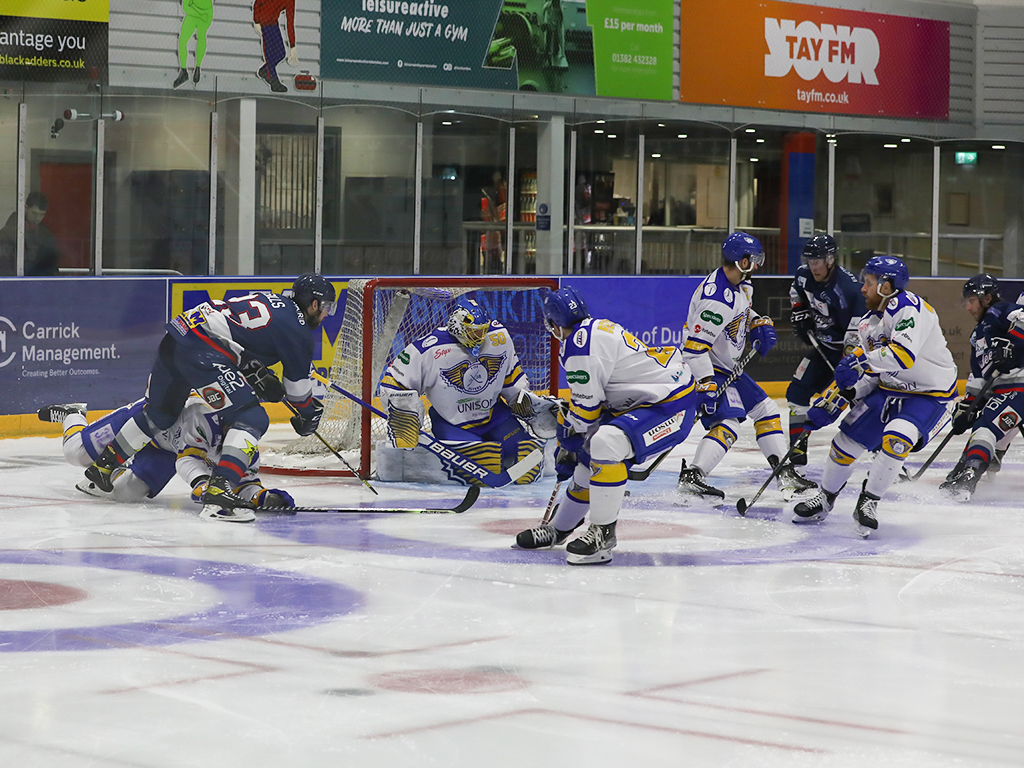 The Kitmart Dundee Stars failed to start the new year off with a bang as their biggest rivals, Fife Flyers left the DIA with two points and the bragging rights from the first Tayside Derby of 2022.

Dundee had made a good start to the game and looked dangerous going forward in the opening minutes, before goaltender, Adam Morrison preformed a stunning triple-save to keep the game scoreless, after eight minutes of play.

The Stars were then dealt a temporary blow when Spencer Dorowicz left the ice to have some medical work done to his face after colliding with the end boards during the first period and he would return to the ice later in the match.

Just as the opening session looked to be ending how it started, Dundee broke the deadlock with 30 seconds left on the clock.

A long pass from Philippe Sanche set the Stars off on an attack and forwards, Charlie Combs and Dillon Lawrence would take the puck into the Fife end, where Lawrence beat Shane Owen with a low shot between the legs.

Heading into the second period, all the momentum had fallen behind the home team but just 29 seconds after the restart, the visitors were level.

A debut goal and inch-perfect shot from Brandon Magee got the Flyers on the scoreboard, but they would not be level for long.

In the 23rd minute, Sanche got himself on the scoresheet and restored Dundee’s lead by poking home a loose puck amongst a pile of bodies in front of the Fife net.

After a lengthy review by referees Toby Craig and Robin Elliot, the goal was awarded and there would be another game-changing goal just moments later.

With the Stars down a man as Alexandre Ranger was punished for a tripping foul, Jacob Benson redirected the shot of Jonas Emmerdahl past Morrison to tie the game on 25 minutes.

However, Todd Dutiaume’s men were then gifted a chance to take the lead for the first time, as Dundee’s Craig Moore was also called for a tripping and that allowed Greg Chase to convert on the powerplay after 28 minutes.s

Chase was the extra man and sat out on the left wing before pushing in to blast home the rebound of Erik Naslund’s shot that had been beaten away by the Dundee goalie.

The score would then not change until the final minutes of the middle period and the matchwent from a one-goal game to a mountainous climbs for the Stars.

After leading 1-0 at the first break, the Stars now found themselves 5-2, just 20 minutes later and the Flyers made sure they would protect that lead throughout the third period.

After a quiet 15 minutes, Omar Pacha players continued to push for the goal that could get them back into they game and eventually it would come.

Although, it was in the final minute of the game and was scored by Kyle Haas, who stepped in to drive a shot past Owen, with 57 seconds remaining.

The Flyers were then given something to worry about when Naslund was sent to the penalty box for cross-checking a Dundee player, with 29 seconds left.

The Stars swapped their goalie for an extra attacker to gain a six-on-four man advantage but would only end up conceding after a mistake allowed Chase to score into an empty net for his brace.

Dundee now just have two days to rest up and prepare for Wednesday’s visit of the Nottingham Panthers to the DIA (face-off 7:30pm).