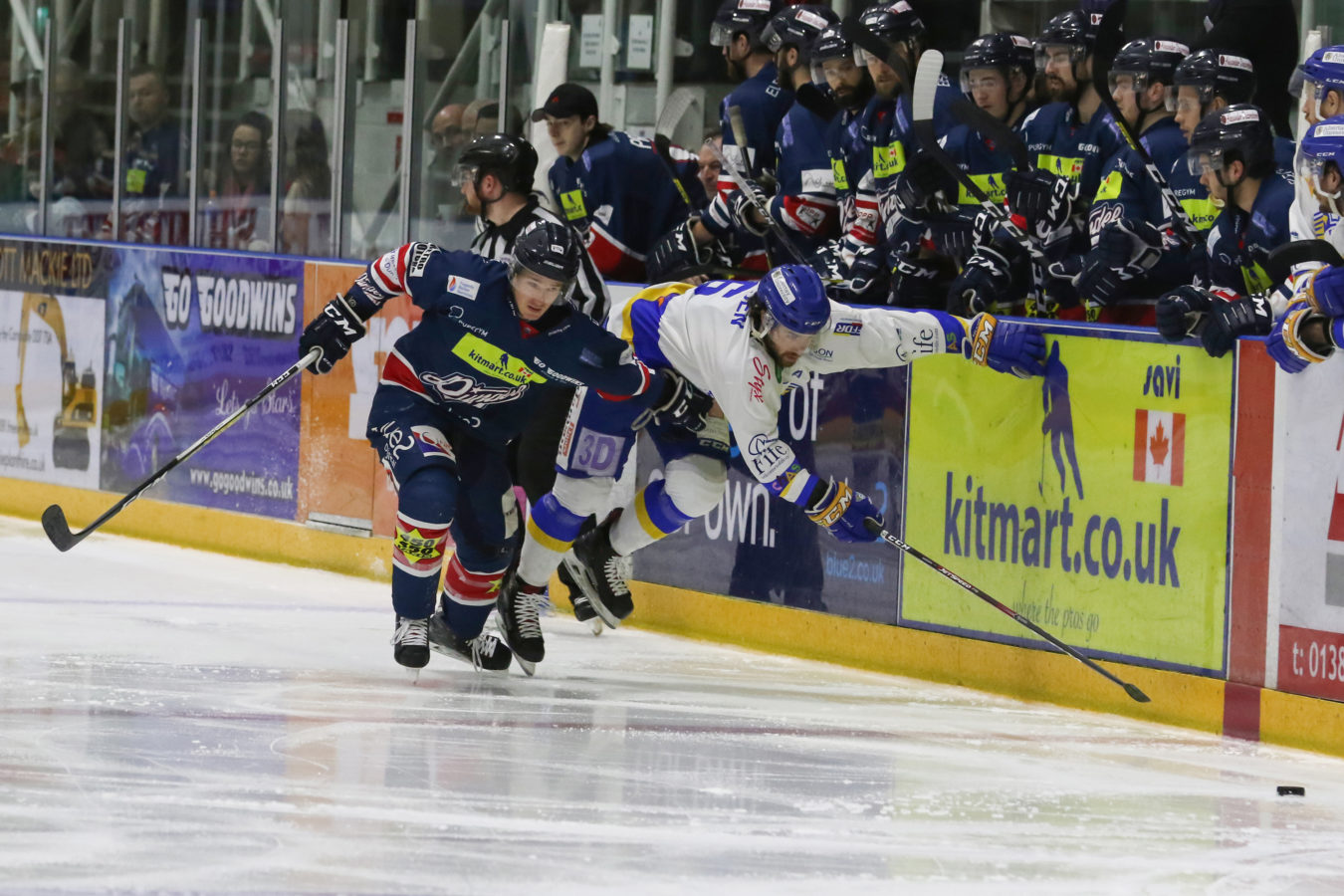 The Kitmart Dundee Stars were looking to quickly end a two-game losing streak as their biggest rivals, Fife Flyers came to the Dundee Ice Arena on Saturday night and the Stars were only missing the injured Kris Inglis.

The first chance went the way of Dundee as Kevin Dufour and Justin Maylan closed in on the Flyers goal but Adam Morrison made his first save of the night with ease.

There was then a scramble in front of the Fife goal as Stars forward, Egils Kalns sent a shot towards goal and both Jordan Cownie and Brett Stovin had a go at turning it in but the puck alluded them before being cleared by the Flyers defence.

However, the pressure from Dundee did not end there as Elgin Pearce was next to test Morrison and his shot was only partially stopped but the Fife keeper was quick to turn and dive backwards to stop Cownie from scoring on the rebound in the third minute.

Dundee’s netminder, Alex Leclerc then had to make his first stop of the game when Danick Gauthier released a fast shot from just inside the left face-off circle.

The first penalty of the night was then called on the four-minute mark as Kalns was deemed to have interfered with a Flyers player, so he would sit for two minutes in the sin bin.

Although, defender Craig Gans would join him 55 seconds later as he sent the puck out of play in his own end, resulting in a delay of game penalty.

Leclerc had made a few key saves during the first part of the Stars penalty kill but with a two man advantage, Todd Dutiaume’s side opened the scoring in the sixth minute.

Gauthier was again the shooter for Fife and this time he blasted a slapshot from just inside the blue line and it flew straight over Lelclerc and into the top of the net.

The opening goal came moments after James Livingston missed an open goal for the Flyers after the initial save was made by the Dundee goalie the puck dropped to the left side of the net but Livingston blasted his shot straight across the face of the goal.

The Stars did manage to kill off the rest of Gans’ penalty without conceding but were still under pressure from the visitors and Leclerc made another good stop, this time with his stick on Jordan Buesa’s effort in the eighth minute.

Omar Pacha’s men then had their first chance on the powerplay as Tim Crowder was penalised for a hooking foul in the ninth minute but Dundee could not tie the game whilst having a man advantage.

Fife had settled in and were trying to protect their lead as the home side went back to attacking in waves and they almost scored when the captain, Matt Marquardt had a chance from the middle of the slot.

However, his first-time effort from close range was stopped by the shoulder of Morrison.

The Flyers held onto their narrow advantage until the first break and to the dismay of Dundee fans, added to their lead in the opening minute of the second period.

After just 35 seconds, Chase Schaber had the puck in the net but was luckily helped out by the right post as his shot struck the pipe and went inwards after beating Leclerc.

The Stars almost responded instantly as Colton Kroeker went forward but put his effort just wide of the target and when a second chance came to him on a pass from Maylan, he could not jam it past Morrison.

Moments later, Cownie found the same fate as he tried to finish off a good move between Kalns and Stovin but the Flyers goaltender again denied Dundee of their first goal.

Anthony Beauregard was the next Stars player to be shut down by Morrison as he quickly gloved the Canadians shot after 22 minutes but the home team then had another man advantage as Fife were hit with a too-many men penalty.

On the powerplay, Dundee struck the post before Fife’s Paul Crowder broke away with a shorthanded chance.

Although, Leclerc made a strong kick-save to keep the score at 2-0 but a few seconds later, he could not stop Schaber from making it 3-0.

With the Kirkcaldy club back to full strength, Schaber got through most of the Stars defence before tangling with Jagger Dirk, however he was still able to get a shot off from right on the doorstep of the Stars goal and it slipped just under the arm of Leclerc at the halfway point.

Finally, in the last minute of the second session, Dundee found their first goal and it was scored by Gans.

The defender netted his first goal of the season with five seconds on the clock and that started the bombardment of teddy bears onto the ice.

That goal was just what the Stars needed and they could potentially build off that in the third stanza.

Again, the home team came out swinging and just 88 seconds in, Dufour put his shot off the post.

Dundee went back on the powerplay in the 43rd minute as Kyle Just was boxed for a late hit on Pearce but the Flyers penalty killers kept their 100 per cent record intact.

Dufour continued to be at the forefront of the Stars attack but was again denied.

This time he had a wide open net to shoot at and simply put the shot on target but Morrison’s glove quickly came out of nowhere to rob the Canadian of a sure goal.

Dutiaume’s men lifted the tempo with a few big hits and it quickly paid off as Tim Crowder added a fourth goal for the away side.

The Flyers forward applied a top corner finish from just to the left of Leclerc’s goal after 47 minutes but the Stars went straight back on the attack but were unable to finish three golden opportunities.

Their first chance flew over the bar before Dufour attempted to wrap the rebound around the post but the shot was blocked and their third and best chance was fired wide.

The Fifers hit more penalty trouble in the 50th minute as Jonas Emmerdahl was called for boarding but despite Dundee testing Morrison further, they again went unrewarded on the powerplay.

Their best chance came when Maylan sent a pass towards Dufour, who was standing at the back post but the pass was cut out by Morrison as he dove on top of the puck.

Gauthier was given a chance to add a fifth goal for Fife as he was fouled from behind by Dirk and a penalty shot was awarded.

A calm, cool and collected Gauthier skated forward and slotted the puck between the legs of Leclerc in the 53rd minute.

The game was gone and both teams settled in for the final few minutes.

Fife claimed their second win of the year in Dundee and brought their win percentage back to 50 per cent against the Stars this season.