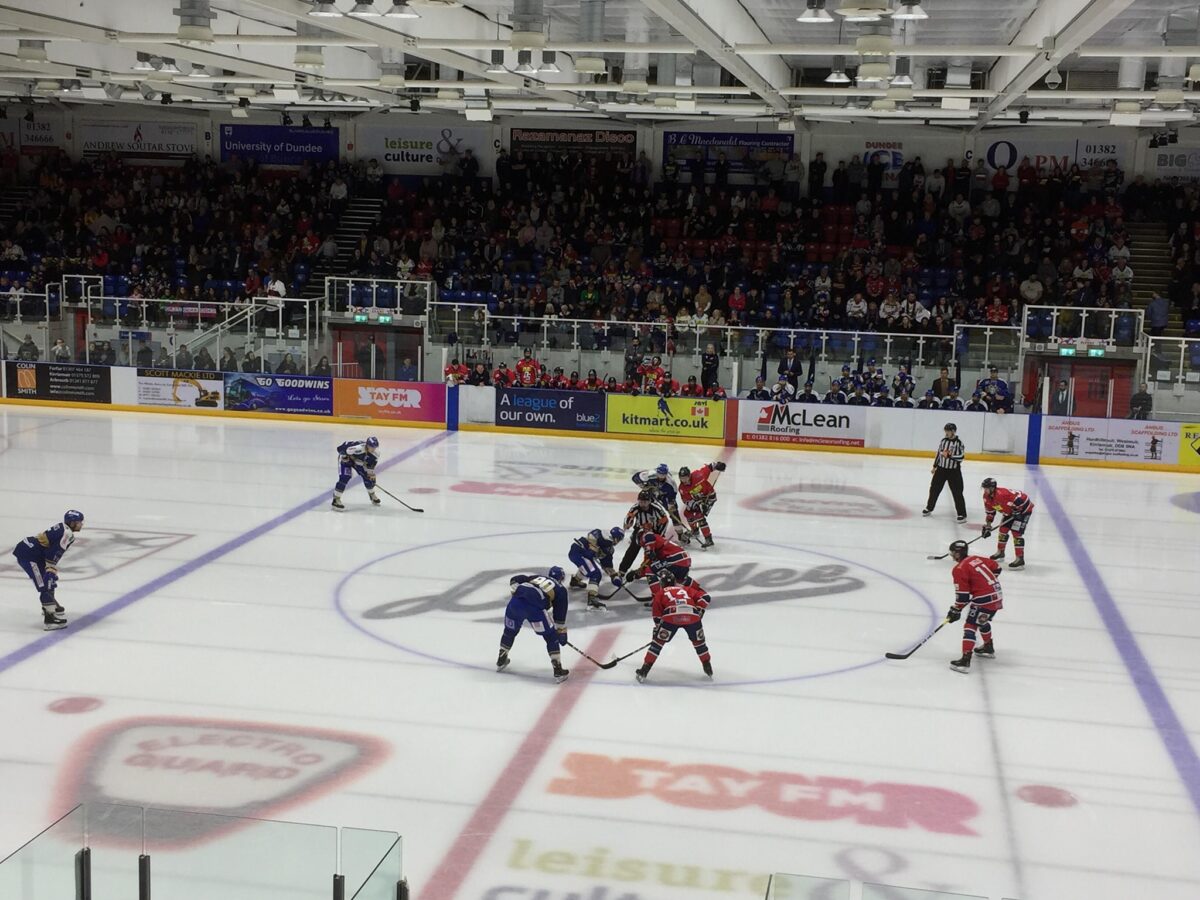 The Kitmart Dundee Stars were unable to find a way past the Fife Flyers in the first derby of the new season, as they lost their first Challenge Cup match.

After a disappointing result on Saturday night in Manchester the Stars couldn’t repay a large crowd that turned out for their first derby with their bitter rivals, as they were edged out 2-0 at home.

Both teams had full line-ups and the first chance of the game went the way of the home side.

Dundee’s Matt Marquardt drove through the middle of the Fife defence before flicking the puck across goal but his on target shot was stopped by the arm of Adam Morrison in the Flyers goal.

Stars were causing more trouble as they created multiple dangerous attacks and were circling around the Fife net but they were unable to get a strong shot away as the visitors scrambled to defend their goal.

Egils Kalns almost put the Stars ahead after he flew across the Flyers end but Morrison tracked him well before diving to get across and stop a delayed shot.

After a brilliant save by the Kirkcaldy club’s keeper, Kalns was then the recipient of the game’s first penalty, he was called high sticks in the sixth minute.

Just as Dundee returned to full strength, Jagger Dirk was deemed to be guilty of roughing in the eighth minute and that put Omar Pacha’s men back on the penalty kill.

However, the home team held out once more and after sustaining a period of pressure from their opponents, they finally got some offensive zone time themselves.

Despite all the time on attack, the game remained scoreless but it was mostly down to both goalies bailing out there side whenever mistakes were made.

Alex Leclerc was very reliable for Dundee when they made a few poor turnovers.

Stars finally had their chance on the man advantage when Sam Jones was boxed after 14 minutes for holding and 40 seconds into that powerplay, Fife’s Michal Gutwald sent the puck into the stands form his own end, making it a five-on-three advantage.

Todd Dutiaume’s side seen out the long powerplay but unnervingly for him, Stars were creating a lot of chances.

However, unlike their ruthless performance against Glasgow, they just couldn’t get a clean shot away on the rebounds.

With no goals in the first period, a tense second stanza lay ahead for both sets of fans.

Again, Dundee dominated the opening minutes but found no breakthrough and later in the period it was Fife who had the chances and the best one came from Chase Schaber as he forced Leclerc into the second of a great double save.

At the halfway point of the match there were still no goals to report but both sides continued to have their share of attacks.

There were some quiet spells approaching the second break but a few moments of frustration started to show as players exchanged heated words following some big hits in the last few plays.

After 40 minutes of play it remained scoreless but Brett Stovin had a chance to change that 32 seconds into the third period as he went on a breakaway into the Fife end but Morrison pulled off a flashy glove save to deny the Star.

However, Schaber would finally break the deadlock 23 seconds later.

Kyle Just sent his first effort wide of goal before having the puck returned to him and his second shot would be straight into the chest of Leclerc.

Although, the Stars keeper could not contain the puck and it spilt back out onto the ice where a waiting Schaber quickly applied the finish to give the visitors the lead.

Shortly after the goal, Fife’s Jordan Buesa was penalised for a holding foul but Dundee couldn’t answer straight back even with a man advantage.

Pacha’s men were struggling to break down the Flyers defence and were also struggling to maintain possession in the attacking end.

Even though the chances were being created, Morrison stood firm to stop every shot that came his way.

The Stars were handed two late chances to equalise as Mike Cazzola and Jones both took late penalties.

The Flyers manged to kill off one of the powerplays but with just seconds remaining on the Jones minor, Pacha called his timeout and pulled his netminder.

Even with the last chance gamble, Dundee still could not find a way past Morrison and Danick Gauthier would seal the victory for Fife with 39 seconds on the clock, he scored into an empty net goal.

Pacha must now pick up his young squad and get them refocused and motivated ahead of next weekend’s home double header against Nottingham Panthers and Sheffield Steelers.

Get your tickets now HERE!