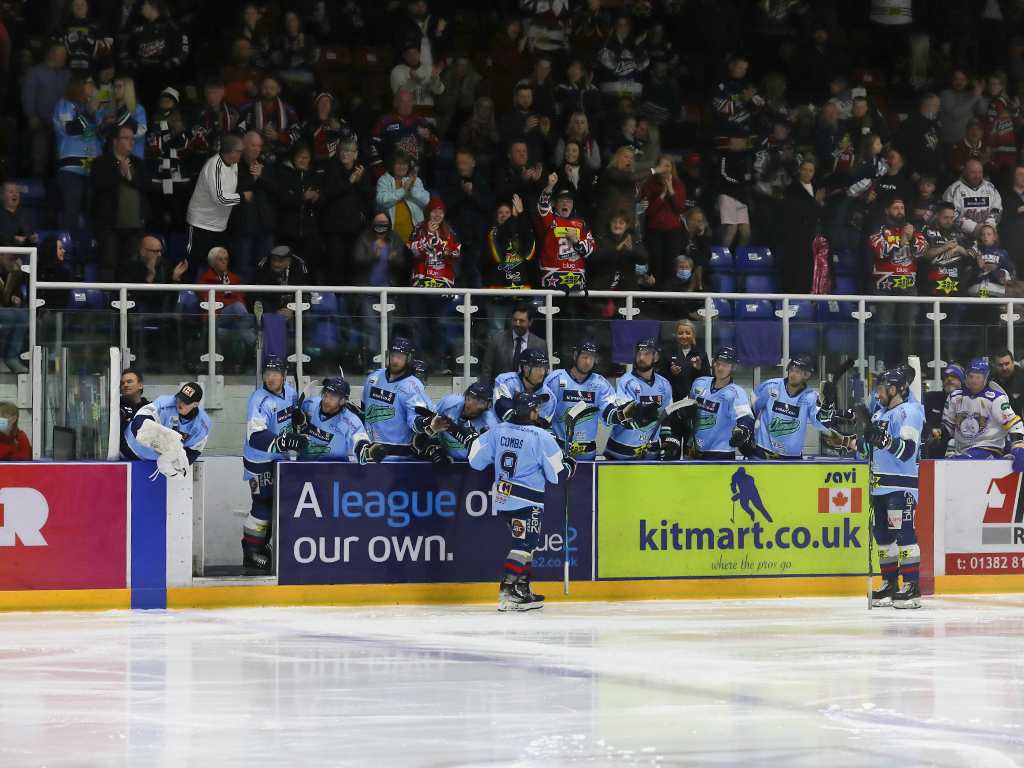 The Kitmart Dundee Stars had a chance to seal a four-point weekend and back-to-back wins over their arch rivals, Fife Flyers as they hosted the Tayside Derby on Sunday.

The Stars did not get the start they were hoping for and found themselves behind after five minutes, when Carson Stadnyk got on the end of Michael McNicholas’ cross-goal pass and turned it past the sprawling Stars goaltender, Brython Preece.

Dundee then failed to answer back whilst on a powerplay, as Matt Carter was punished for a hooking foul but they had been testing the Fife defences and Shane Owen in goal, all to no avail.

The visitors then made the Stars pay for not taking their chances and doubled their lead in the 13th minute, with a carbon copy of their first goal, but this time it was Stadnyk setting up James Isaacs to turn home.

Todd Dutiaume’s men could have made it 3-0 when they were given a brief man advantage just after their second goal but Dundee’s defence quickly tightened up and shut the Flyers down and they then began to start digging their way back into the game.

With only 15 seconds left on the clock, the Stars netted a crucial game-changing goal that cut the deficit back to one, as Spencer Dorowicz used his speed and quick release to fire a low shot through the grasp of Owen.

Then in the second period, Dundee quickly built on their late goal and found a quick leveller, with Combs firing home from close range after only 54 seconds of play.

Although, the game level again for only eight seconds as straight from the restart the Flyers responded, with Matt Carter’s shot being heavily deflected by the stick of Jacob Benson and that slowed the puck down enough to take it over Preece and into the Dundee net.

The two teams then fought hard to score the next goal, as that would swing the momentum massively in one side’s favour but after 4-0 minutes, the Flyers still held a 3-2 lead, despite being outshot 59-16, with 34 and 11 of those shot’s hitting the target, respectively.

In the third period, each team continued to fight hard for the next goal that would most likely decide the outcome of the match and in the end it did.

In the 48th minute and after a long stoppage to clear up some blood on the ice, the Flyers converted a powerplay into their fourth-goal of the night, as Benson bagged his brace.

As Fife came forward, Carter’s attempted shot had been stopped by a Dundee stick but the puck sprung out in front of goal for the onrushing Benson who then stuck it past Preece, making it 4-2 to the visitors.

Despite using their timeout, swapping the goalie for an extra attacker and having a late powerplay, the Stars failed to find another way past Owen, who ended the night with 51 saves.

The defeat has put Dundee down to seventh in the standings but next weekend’s three games in three nights will decide their final seeding, heading into the post-season.

The Flyers return to the DIA next Friday, before the Stars go on the road against Cardiff Devils and Coventry Blaze to complete the regular season.