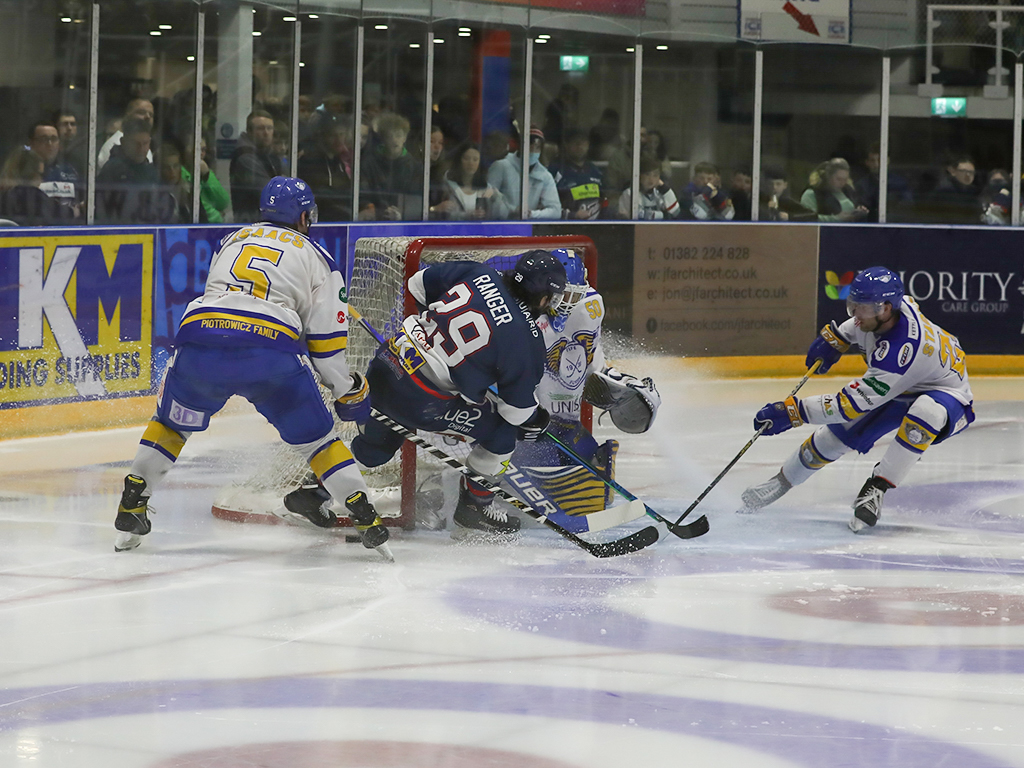 The Kitmart Dundee Stars faced their biggest rivals one last time in the 2021/2022 Elite League season and for the Stars to clinch fifth place in the table, they needed to take maximum points from the final weekend of the regular season.

Therefore, Dundee needed to make home ice count and defeat their arch enemies one more time and they would do so with goaltender, Adam Morrison and forward, Toms Rutkis back in the line-up after time out through injury.

Although, Quinn O’Brien was then scratched as the team’s extra import and joined the recovering, Craig Garrigan in the stands.

Straight away, the Stars were gifted a chance to shut the Flyers out of the game, as Fife’s Carson Stadnyk was punished for hitting Alexandre Ranger in the face with a high-stick, after only 46 seconds of play.

Despite, the man advantage for two minutes, Dundee failed to find a way past Flyers goaltender, Shane Owen, but they had peppered the Canadian with a number of shots.

The scoring was soon opened though and on eight minutes, Philippe Sanche finished off the Stars silky attack by scoring off his own rebound.

Dundee had won possession back in the own end before Ranger moved the home team onto the attack and then passed to Gabriel Desjardins and he would quickly drop a pass back for Sanche.

The Canadian winger swiftly saw his first effort denied by Owen but the rebound fell right back in front of him and he was quickly shot the Stars into the lead.

Dundee then continued to dominate the play and ended the first period with that one-goal lead and 18 shots of their 36 on target, compared to the Flyers 5 of 15.

In the second period, the visitors were quickly knocked even further behind as Dundee showed a more clinical touch.

Inside the 24th minute, a misplaced pass by Dundee’s Timi Lahtinen luckily bounced off the legs of Fife defender and into the path of Dillon Lawrence, who showed his skill and ability to backhand the puck into the top right corner of Owen’s net.

Omar Pacha’s men then quickly made it 3-0, as Charlie Combs and Spencer Dorowicz did their parts to turn a scrappy piece of play into a goal.

With the possessions shifting constantly in the Flyers end, Combs stole the puck from the left corner and circled back out to the front of goal where his first shot snuck through the defenders before bouncing off the keepers leg pads.

Dorowicz then did his job, as he battled hard to get to the front of the net and broke free at the right moment to turn in the rebound, after 25 minutes.

The Stars then continued their dominance and pinned their bitter rivals back and whenever, they did break though Adam Morrison produced save after save to keep Todd Dutiaume’s side off the scoreboard.

Dundee then added a fourth goal in the 36th minute, as defenseman Michael Poirier added his name to the scoresheet, when he made it 4-0 after driving to the net and poking the puck under Owen, who was diving across his goal to stop the blueliner.

A late powerplay did nothing to revive the Flyers hopes of getting back into the game and heading into the final period, they were still four goals behind.

As it was their final home game in the league, the Stars did not want to disappoint the massive home crowd in the Dundee Ice Arena and scored two more goals in the opening four minutes of the third session.

Dorowicz put Dundee 5-0 up when his shot from an acute angle slipped through the grasp of Owen and dropped into the net, on 43 minutes and then Combs was next player to hit the twine, as he beat the Flyers goalie with a low shot from out on the left wing that found its way in at the back post.

A rampant 6-0 win for the Stars has boosted their confidence and moved them up to fifth place in the standings and they have two more regular season games left to play this weekend.

Tomorrow night they are in Cardiff for a clash with the Devils, before heading to the West Midlands on Sunday to take on the Coventry Blaze, where victories on both nights would see Dundee secure a fifth place finish.