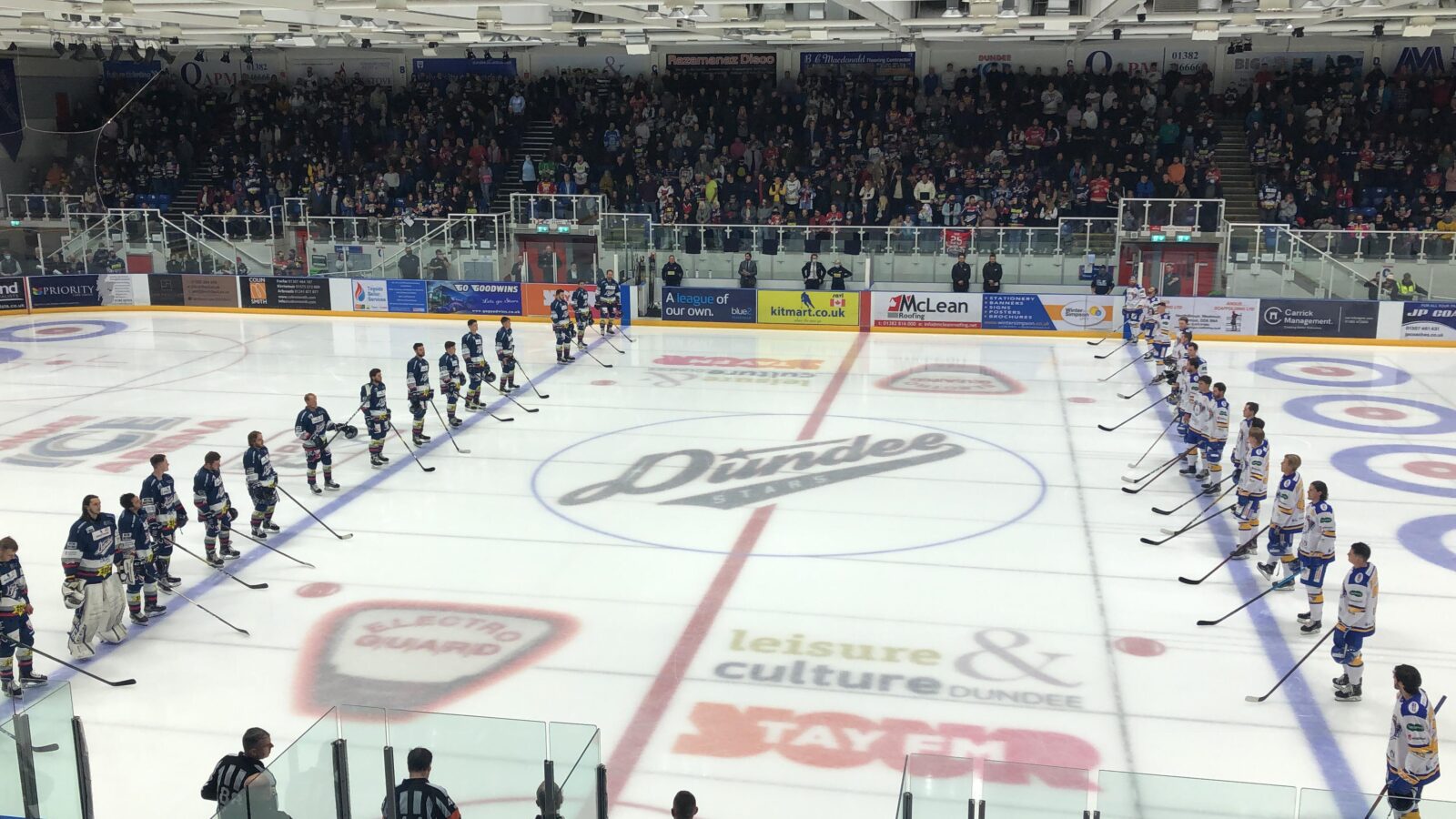 The Kitmart Dundee Stars defeated their arch rivals, Fife Flyers 4-1 in front of a sold out Dundee Ice Arena on Friday evening, as professional ice hockey returned to the city for the first time in 18 months.

The first chance of the new season fell for Dundee’s Drydn Dow in the first 53 seconds of the match, as he saw his rising shot blocked at the last second.

The Stars then quickly set the tone as Dillon Lawrence tried a cheeky wraparound shot from behind the Fife goal, but the Flyers netminder, Shane Owen was not caught off-guard.

The hounding of shots at the away goal continued when Dundee’s Sebastian Bengtsson forced Owen into a shoulder save, after three minutes of play.

The visitors finally looked to get their first real chance of the game, but a missed controlled pass meant the opportunity was squandered.

That then left the door open for the Stars to punish their rivals at the other end.

On six minutes, Connor Sills made the perfect start to life in Dundee by sliding home the final of four shot attempts, to beat a sprawling Owen.

Surprisingly, there would be no real response from Fife, as straight from the face-off, Spencer Dorowicz was gifted a chance to double the lead but a good save from the Flyers keeper kept the deficit at just one goal.

Another opportunity finally came for the Flyers in the 11th minute as Erik Näslund got through the Dundee defences but sent his shot over the crossbar of Adam Morrison’s goal.

However, a great sliding block by Fife’s Imants Lescovs stopped Dow’s pass from finding its target, on 12 minutes.

The Dundonians continued to cause trouble for the Kirkcaldy club and after more sustained pressure, the home side bagged a second goal in the 17th minute.

Sills was involved again and turned from scorer to provider as his and Sebastian Bengtsson’s efforts were denied by Owen, but Philippe Sanche was left unmarked at the back post and quickly slotted home the loose rebound.

An interference call against Dundee’s Kris Inglis meant the Stars would serve the first penalty and his two minute minor carried over into the second period.

Overall, the Stars made a great start and quickly showed their fans what they had been missing for 559 days.

After a routine penalty kill, Dundee resumed their dominant display and soon extended their lead to 3-0 on 23 minutes.

The chance all came from Dow’s pass that sent forward, Dillon Lawrence clean through on the Flyers goal and he calmy fired the puck between the legs of the Fife keeper.

The play seemed to settle down for a short period as Dundee continued to cruise through the game and the Flyers tried to find a spark.

However, any hopes of starting an early comeback were briefly dashed in the 32nd minute, as Bari McKenzie sent the puck out of play from his own end and earned himself a two-minute minor penalty.

Todd Dutiaume would have been pleased to see his new signing, Jacob Benson create a chance for Fife while they were down a man.

The American went one-on-one with the Stars goalie but failed to score on both his first and second chances, as Morrison stayed strong to keep his ex-employers off the scoreboard.

Meanwhile, Pacha would have been pleased to see the creative juices flowing throughout his line-up as in the 35th minute, Toms Rutkis took the puck from his own end, straight to the Fife net and created several scoring chances.

After a few shots and whacks at the loose puck, Owen was still not beat and Caly Robertson would also be denied by the Canadian goalie before the danger was cleared.

The second stanza ended with Dundee still in full control, but the Flyers looked up for a fight to start the third and they got just what they needed as powerplay goal came in the opening two minutes of the third.

As Dundee lost a man for two minutes, with Sanche in the box for tripping, Fife’s Carson Stadnyk turned home a rebound to get the away side off the mark.

From then, the Flyers started to generate some momentum and looked like they might get another goal back swiftly.

However, Dundee started to create more and more again and then the perfect moment came for Dundonian defenseman, Drew Rumgay, as he netted his first ever goal for the Stars.

The 19-year-old defenseman has been training with the Stars this week and made his mark in the 50th minute.

The Stars then started to close out their opponents and eventually the buzzer brought the game to an end and kicked-off the Stars fans celebrations.