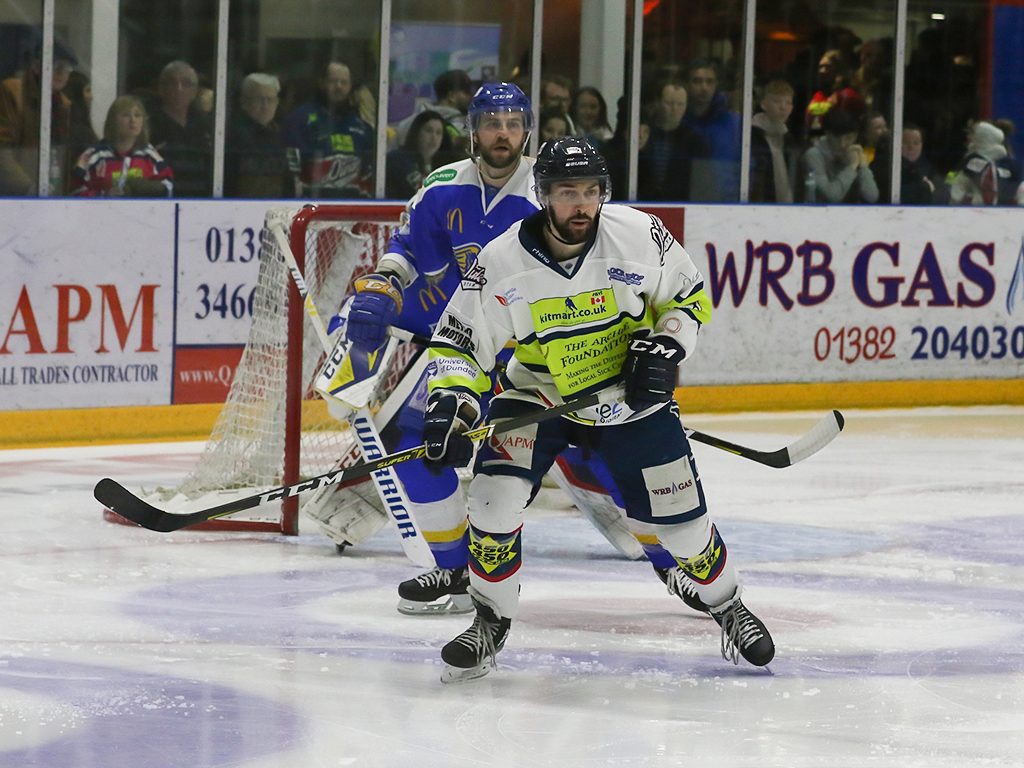 The Kitmart Dundee Stars went up against their biggest rivals, Fife Flyers for the final time in the regular season with both teams Playoff push at a critical stage.

Both teams had scratched just one player from their roster, as the injured Alex Schoenborn missed out for Dundee and Fife were without Martyn Simpson.

The opening minutes saw both teams trade chance for chance but there would be no early goals in this big derby fixture.

However, the visitors would hit the Stars with a quick counter-attack in the fifth minute and with four Flyers outnumbering two defenders, Tim Crowder sent the puck out wide to Carlo Finucci.

The unmarked Finucci then fired a high shot into the net form the left wing as Dundee goaltender, Alex Leclerc scrambled back to try and stop it.

There was then a big chance for the home side to respond as a first shot by Matt Marquardt was saved by Adam Morrison before the rebound fell just in front of several Stars players.

Matt Carter, Brett Stovin and Marquardt all were whacking away at the loose puck before the Fife defence eventually cleared the danger.

There was another opportunity for Dundee to equalise in the 10th minute, as Kevin Dufour carried the puck towards goal but Morrison denied his late shot and Drydn Dow’s follow up effort to keep his side ahead.

Then Carter nearly had the Stars level as his shot was flying towards the target and a deflection directed it towards the bottom corner but Morrison got the toe of his leg pad out to send it wide on 12 minutes.

Although, all of the attacks from Dundee finally broke down their opponents and after 17 minutes, Matt Carter slotted the puck home to make it 1-1.

Carter pulled the puck between his legs whilst skating through the Flyers defenders before unleashing a quick shot up to the left of Morrison.

The two sides were still tied after the end of the first and when the teams came back out for the second they quickly fell back into the end to end to play that was seen early in the first.

However, the Flyers retook the lead in the 25th minute, as Kyle Just won possession from the face-off and the puck came back to Michal Gutwald.

The Fife defenseman stepped into a pass and hit a hard slapshot that rose into the top of Leclerc’s net.

Although 33 seconds later, Dundee went on the powerplay as Danick Gauthier was punished for a tripping foul but Todd Dutiaume’s men would not concede whilst a man down.

Also, when Fife’s Jordan Buesa entered the penalty box for slashing, his teammates came up big again to protect their lead.

Neither side looked close to scoring after that and the second period ended with Fife still holding a one-goal advantage.

In the third session, the game restarted with both teams being unable to create any breaks and that continued for the next 10 minutes.

The next scoring chance fell to Dow in the 54th minute but his wrist shot was easily held by Morrison as Dundee pushed for a late leveller.

The Stars looked like they lacked any ideas that would help them get back into the tie but Omar Pacha went all in after calling his timeout with 99 seconds left on the clock.

Although, after pulling the goaltender, Dundee gave up an empty net goal with 73 seconds left as Mike Cazzola found the gaping goal from his own end of the ice to wrap up the points for Dutiaume’s side.

The Stars now have a week until their next fixture as they face Manchester Storm at home on Saturday and visit Cardiff Devils the following day.