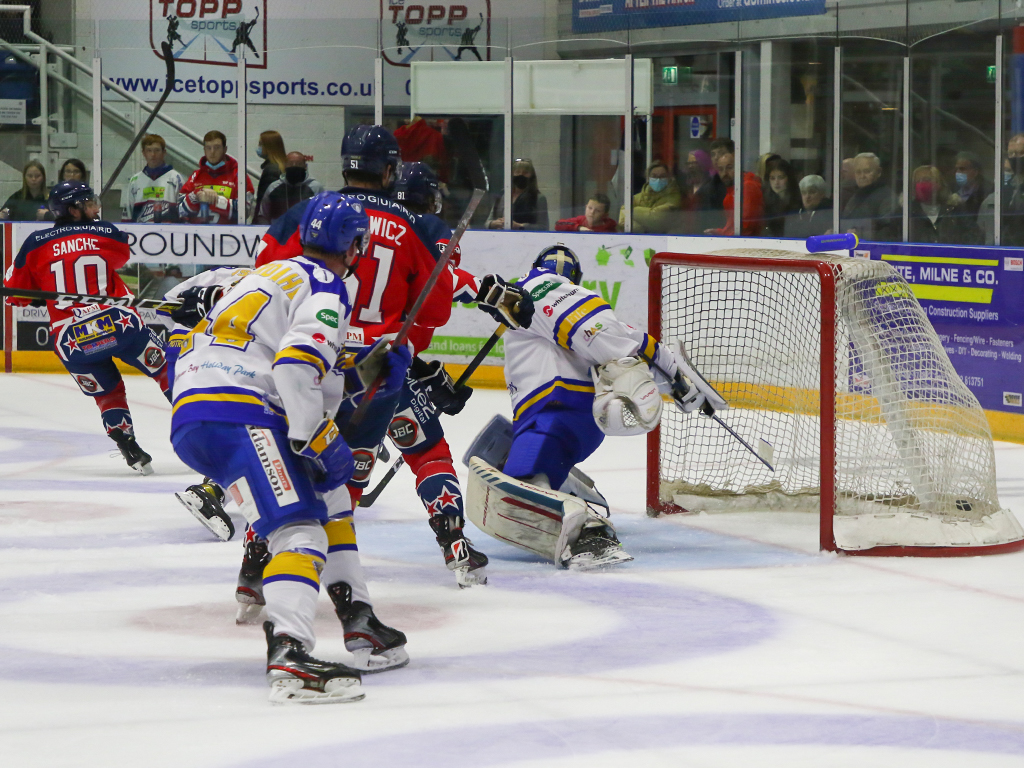 The Kitmart Dundee Stars were dealt a late blow last night, as they conceded a late winner against their biggest rivals and that would end their three game unbeaten cup run.

In a quiet first period of action, the only goal of the opening stanza would come in the 16th minute, as Drydn Dow’s long range pass allowed Sebastian Bengtsson to break into the Flyers end and beat Shane Owen with a sneaky shot at his near post.

The second period was much more full of action and goals, as four would be scored in less than 10 minutes.

Just before the halfway mark and with Dundee a man down after netminder, Adam Morrison had been punished for delaying the game, Fife’s Michael McNicolas smashed home a pass in front of goal to draw the Kirkcaldy club level.

The Flyers then took the lead on 31 minutes, as Carson Stadnyk was able to feed a pass straight across goal for the arriving Jacob Benson to lift past Morrison.

However, Charlie Combs would hit back for Dundee and tie the game at 2-2 in the 36th minute, when he turned Michael Poirier’s pass straight past Owen, from between the circles.

The Stars did not ease up going into the final minutes of the session and punished their opponents for their poor discipline.

With both Kristian Blumenschein and Craig Peacock in the Fife penalty box, Omar Pacha’s powerplay unit worked the puck around the Flyers net before Spencer Dorowicz teed up an easy finish for Philippe Sanche, with a quick cross-goal pass.

The next goal would be crucial for either side as Todd Dutiaume’s men were desperate to tie the game once more and Dundee aimed to push the game out of sight.

Eventually the critical goal came in 48th minute and was scored on a powerplay, with Dundee a man down after being caught with too many skaters on the ice and it came from Erik Naslund, who hit a first time-slapshot that flew through traffic and into the top of the Stars net.

The game-winning goal would then be scored with two and a half minutes left to play and it was also a fourth powerplay goal of the night.

With Dundee’s Michael Poirier sin binned for tripping, that allowed Jacob Benson to deflect the shot of Imants Lescovs under Morrison and also put the Flyers 4-3 ahead.

Fife seen out the final minutes and claimed their first Challenge Cup victory of the season and that also extended the Stars losing run to four games.

Next up for Dundee is a trip to Belfast on Sunday evening for another clash with the Giants in Challenge Cup action.