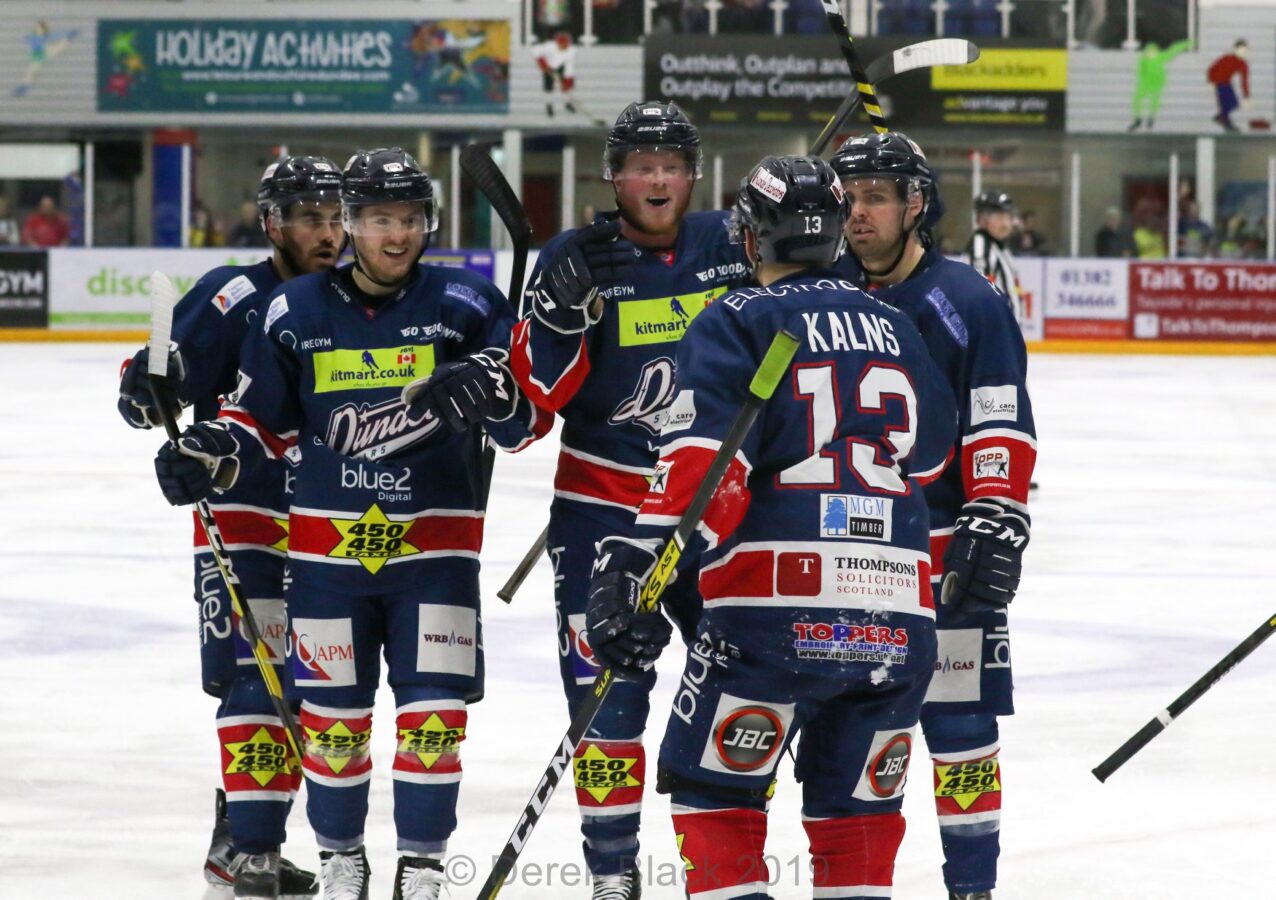 The Kitmart Dundee Stars needed a win and showed early signs of scoring the first goal as Stars captain. Matt Marquardt went close and fired into the side netting on a quickly squared pass.

The Dundee forward was given a second chance seconds later, as he was fed the puck but Fife goalkeeper, Adam Morrison denied Marquardt from just inches away in the third minute.

The home team stayed on the offensive and Marquardt had put the puck in the net but referee Toby Craig’s quick whistle meant that the goal would not stand despite, the Stars captain pushing in a loose puck that was lying behind Morrison.

In the fifth minute, Dundee had the next best chance as Jordan Cownie sent a fast pass across the face of goal to Drydn Dow, who was rushing in towards the back post but the defender’s shot went straight into the chest of the Fife netminder

The Flyers finally had their first chance as James Livingston and Carlo Finucci broke forward with only Dow back to defend, however the Stars defenseman dropped low and blocked the cut back effort from Livingston.

The Tayside team finally got a goal that counted as Alex Schoenborn deflected the shot of Jagger Dirk past Morrison after 10 minutes of play.

Although the Kirkcaldy club put things back on level terms as Finucci rounded the Dundee net and flicked a shot that seemed to hit Paul Crowder before dropping into the Stars goal.

The second period was rather the same as the first as both teams exchanged chances and defended well but on the 28th minute, Fife’s James Livingston picked up the first penalty of the match as he was punished for a tripping foul.

Finucci had the best chance during Dundee’s powerplay as he intercepted a Stars pass and went forward but his wrist shot hit the crossbar  in the 30th minute.

After a long period of pressure, Stars goaltender, Alex Leclerc came up with a big double save to deny Fife’s Mike Cazzola from point blank range.

Todd Dutiaume’s men hit some late penalty trouble but the Stars could not punish their opponents whilst on the man advantage, although just seconds after the Flyers returned to full strength, they conceded.

Dundee’s Matt Carter saw his first effort denied by a great kick save from Morrison as he tried to beat the Fife keeper with a backhanded shot from down low to the right of the net but his second effort was only partially saved by Morrison.

The rebound went over him and dropped to hit the skate of Tim Crowder before sliding into the net with, 19 seconds left on the clock.

Dundee had nicked a late lead but in the final period, the visitors quickly killed the Stars lead.

Jonas Emmerdahl hit a hard shot from just inside the blueline and Cazzola was able to get enough of a touch on the puck to alter its course and send it through the five-howl of Leclerc after 44 minutes.

Omar Pacha’s men could have restored their lead straight away but Carter couldn’t stay on his feet to tap in a moving puck in front of a wide-open goal.

Although, the home team did get back in front in the 48th minute as Schoenborn netted his second of the night.

Stars winger, Egils Kalns had created an opening and got his shot off but it hit the pads of Morrison, so the Latvian flicked another effort towards goal but it came back out at the other side, where Schoenborn was waiting to fire into a gaping goal.

The home team finally found some breathing room as Brett Stovin deflected the shot of Dow, down and under Morrison in the 53rd minute to make it 4-2.

Dundee fended off a late powerplay chance for Fife before Anthony Beauregard sealed the victory with an empty net goal in the final minute.