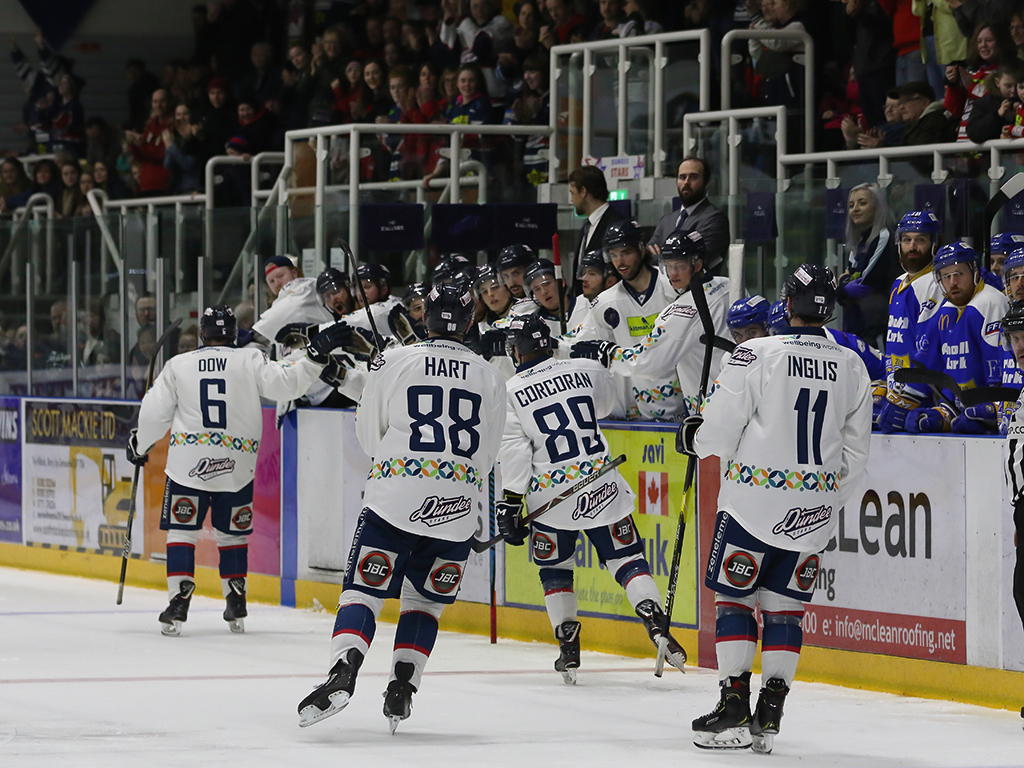 The Kitmart Dundee Stars completed a perfect record of home wins over their rivals, Fife Flyers with a 4-1 victory on Sunday night.

Dundee won their sixth of seven meetings with Fife this season and also ended a five-game losing streak.

The Stars were three bodies down as Mike Sullivan, Petr Chaloupka and François Bouchard were all out injured and the pile up of injuries had forced Stars head coach, Omar Pacha to lace up his skates once again.

Meanwhile the Flyers were down six players including the injured Scott Aarssen and Paul Crowder, as well as the suspended Evan Stoflet.

After less than two and a half minutes of play, Stars turned the puck over in their own end and a squared pass from Mike Cazzola to Brett Bulmer, allowed Bulmer to finish past a stretched-out, Pontus Sjögren and give Fife the lead.

However, just after the five-minute mark, Stars drew level as Drydn Dow slid home Matt Marquardt’s pass that went across the crease of the Flyer’s goal.

Jordan Buesa then had a great chance to restore Fife’s lead but despite getting into the Dundee end alone, he was quickly forced to put a shot into the chest of Sjögren, as the Stars defence recovered quickly

Two big hits from Stars players Fabrizio Ricci and Lukas Lundvald raised the atmosphere in the DIA as the tensions between the teams began to show.

As the first period was drawing to a close, Ricards Birzins delivered a big check to Dundee rookie, Craig Garrigan earning himself the game’s first penalty for interference in the 15th  minute.

Todd Dutiaume’s men killed off the penalty before there was chances at either end as Sjögren made a stop with his head after a dangerous turnover by Dundee but then the puck would just not settle for the Stars in front of the visitor’s goal.

The tensions flared again but the referees quickly settled it down and the Taysiders took their first penalty of the game as Shawn Boutin was called for hooking with 18 seconds left on the clock.

With no difference between the teams after the first period, a powerplay chance for each side in the first few minutes of the second period still could not separate the Scottish rivals.

Then the Kirkcaldy club missed a huge chance to re-take the lead as Cazzola combined with Carlo Finucci but Sjögren went from post-to-post to deny the pair.

However, the home side would go in front as Oliver Paczkowski netted his first goal for his new club, after he took Lundvald’s delayed pass and slid it under a diving Shane Owen in the 28th minute.

Omar Pacha’s side built from that and attacked the Fife defence a lot more frequently but they were not able to extend their lead until Jordan Cownie combined skill with luck to make it 3-1.

Ricci had chipped a puck out from behind the Fife goal and it bounced off the side netting before dropping in front of Cownie and the Dundonian hit the puck before it even touched the ice, sending it flying into the net on 33 minutes.

The home team had a chance to make it 4-1 but Garrigan missed a wide-open goal by sending his backhanded effort under the goalie and out the other side of the crease.

Yet, with Dundee firmly in control of the game, it began to boil over again when Marcus Basara slashed Stars defender, Kris Inglis behind the play.

The pair were ready to fight but Stars goalie, Sjögren quickly stepped in along with the referees and got in between the two.

Inglis received a two-minute roughing penalty and Basara was assessed a slashing minor as well as a roughing penalty, leaving Stars on the powerplay inside the final two minutes of the second period.

The penalty was again killed but the Flyers went back on the penalty kill again early in the third period as Craig Moore was then punished for high-sticks after 42 minutes.

A lapse in concentration handed a chance to Charles Corcoran but despite him holding possession up for the rest of his team to get involved, the Stars could not capitalise on the Flyers mistake.

Dundee’s defence continued to frustrate a tired Fife offence and both teams were still pursuing that game-changing-goal and it nearly came when Fife’s Rick Pinkston saw his effort strike the left post.

Dutiaume pulled his netminder with 90 seconds to go and used his timeout as Fife desperately searched for the goal that would get them back in the game.

However, Dundee’s defence defiantly denied the Flyers before Marquardt chased down a blocked shot, held it up and sent a pass across to Brian Hart, who tapped in Stars fourth of the evening.

The final buzzer sounded to confirm that Dundee had captured two crucial points and snapped a five-game losing streak.

Goal scorer, Brett Bulmer and Dundee’s Fabrizio Ricci were selected as the recipients for ‘Man of the Match’ awards and the fixture will be reversed next Saturday as Stars travel to Kirkcaldy but they must head south first as they face Manchester Storm this Wednesday.

Speaking after the match, Stars Head Coach, Pacha said: “It was a big win, we needed it and that is the main thing, we needed two points in the standings.

“I thought the guys played good enough to win and at times we made some mistakes and we missed a few chances that I think we would like to have back.

“Overall, we had a professional approach all night and solid goaltending, so it was a good night.”