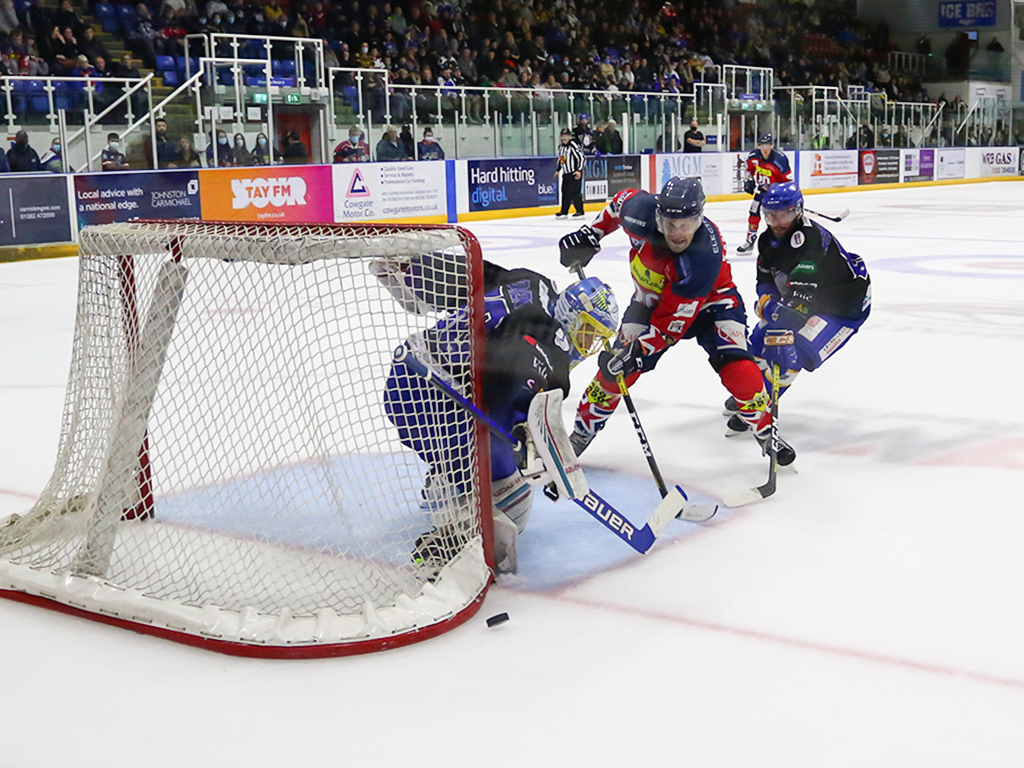 The Kitmart Dundee Stars made it three wins in a row on Saturday night as they came from behind twice before going on to beat Fife Flyers on penalties.

There were a few late changes to the Stars roster as defenseman Kyle Haas dropped out of the squad and with only four available defenders, 20-year-old, Latvian, Patriks Grigors was drafted in to ease the workload.

Whilst Dundee were also without Craig Moore, Drew Rumgay and Toms Rutkis, there opponents were at full strength.

The first period of play was heavily dominated by the home side with the Stars having 22 shots on Shane Owen’s goal, while the Flyers only managed six on Adam Morrison.

However, the game would still be scoreless after 20 minutes, but the opening goal was not far away and came five minutes into the second period.

After a turnover by the Stars in the Fife end, the Flyers quickly went on the counter-attack, with Imants Lescovs releasing Greg Chase down the left wing.

The Canadian looked to slow down before picking up his pace again to round Dundee’s Drydn Dow and as Chase skated across Morrison’s goal, he waited until the last second to slide the puck in at the back post.

A few quick passes out from the back-end allowed Kris Inglis to switch the play over to Craig Garrigan and from the right flank, the Dundonian fired a low shot at Owen.

The Flyers netminder easily stopped Garrigan’s effort but allowed the rebound to spring out straight in front of his net and Spencer Dorowicz swiftly smacked the puck home to tie it at 1-1.

Both sides could still not be separated after 40 minutes and once again it was Todd Dutiaume’s men that came out and made a quick start.

Only 15 seconds had gone from the clock when Chase bagged his second of the evening.

Fife’s Erik Naslund had blocked a pass and knocked the puck forward for Chase and sent him straight through on goal and he made no mistake, beating Morrison high to his right.

Although, the Stars would not be behind for long as Dillon Lawrence punished a mistake by the visitors on 45 minutes.

Ex-Star, Matt Carter had tried to send a pass from his own end out to his breaking teammates, but the puck ricochet off of a Flyers skate and fell straight back to the trailing Lawrence.

The Canadian quickly gathered the puck, spun and flung it past Owen to draw Dundee level once again.

Both goaltenders had been the standout players for each side and after making some more important saves, the two teams were still locked in a draw after 60 minutes of regulation time.

Five minutes of three-on-three overtime also came and went with no clear winner found and meant a shootout was required to separate the sides.

However, it was no quick event as the penalty shots went on for 10 rounds and both Carter and Connor Sills scored in the first round.

Chase then put Flyers 2-1 ahead as Sebastian Bengtsson was denied by owen.

In round three, both Michael McNicolas and Dundee’s Charlie Combs failed to score, however Philippe Sanche drew the home side level in round four, following Isak Adelgran’s saved effort.

Next up were James Anderson for Fife and Timi Lahtinen of the Stars but neither could score a decisive goal, which begun sudden death rounds.

From round six, Dundee would shoot first and the pairs of: Gabriel Desjardins and Chase, Sills and Carter, Sanche and McNicolas and Sills and Carter again would all be unsuccessful.

Then Dillon Lawrence stepped out to take Dundee’s 10th penalty and as he edged his way forward, he released a quick snapshot that beat Owen down low.

The Kirkcaldy club’s hopes of still winning the extra point rested on forward Craig Peacock but he failed to hit the target at the crucial time.

Another win for the Stars made it three on the bounce and now has them sitting second in Group A of the Challenge Cup, with six points after five games and within two of Belfast Giants.

Next weekend the Stars face a double-bout of Elite League action, beginning with a trip to Surrey on Saturday night as they take on Guildford Flames and then return home to host Sheffield Steelers on Sunday.

Make sure you buy your tickets for our first home league game of the season HERE.