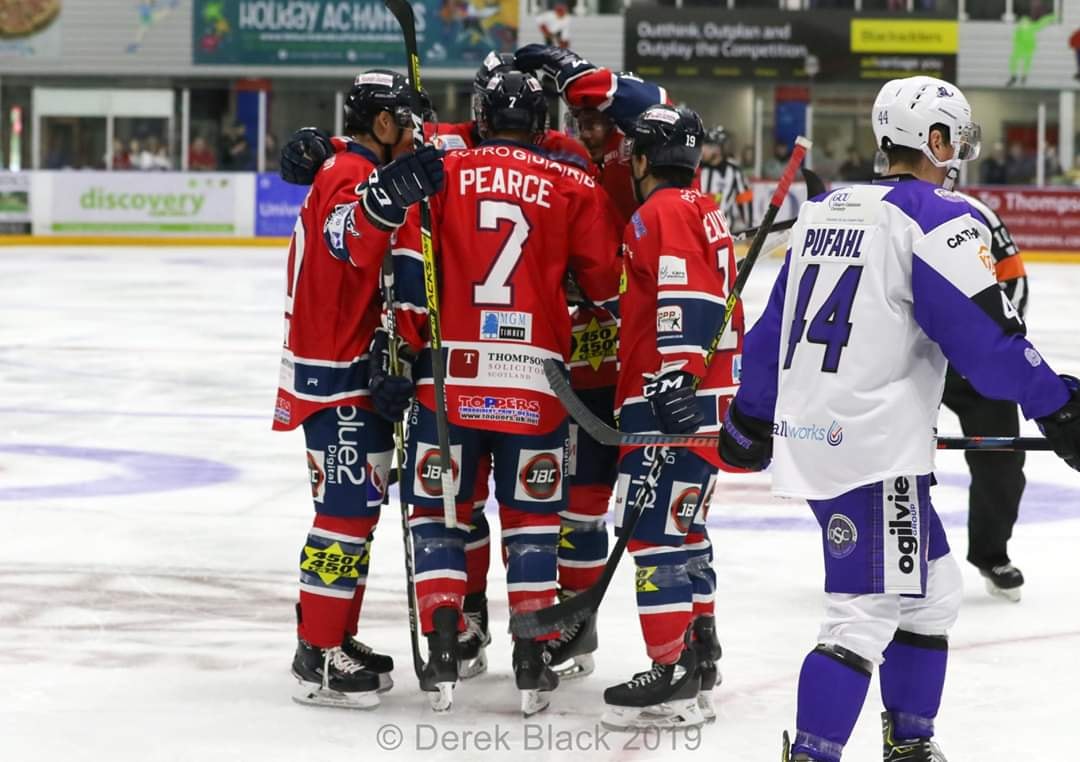 The Kitmart Dundee Stars made a similar start to Saturday nights 6-3 Challenge Cup win in Glasgow as they took another early lead against the Clan on Sunday.

Anthony Beauregard opened the scoring for the second time in as many nights, as he arrived late to apply the finish to a great piece of play by Kevin Dufour and Elgin Pearce.

Pearce’s original shot had been saved after a quick offensive zone entry by the Stars but Beauregard trailed the play and drifted in to collect the rebound and fire it beyond Patrick Killeen after just 42 seconds of play.

The visitors hit penalty trouble early on as Mac Howlett and Matt Stanisz were sinbinned, giving the Stars a five-on-three powerplay.

Omar Pacha’s men doubled their lead inside four minutes, this time it was Pearce to put the puck in the net.

Kevin Dufour had his initial pass blocked by Matt Pufahl but his second attempt found Pearce, unmarked in front of the net.

A few minutes later, Pearce was denied for a second time as he went clean through on Killeen’s goal but the Glasgow goalie pulled off a good glove save to deny the Star.

Two clear fouls were left uncalled by referees Pavel Halas and Steve Brown and that resulted in a retaliation infraction by Matt Marquardt and that left Stars a man down.

However, Dundee did cope well and seen out the two minutes and they were ready to attack again but as Jordan Cownie went forward, he evaded two charging Clan players but was then checked behind the play.

Although, even with the penalty pending, the Tayside team put the puck in the net for a third time.

Cownie had played in fellow Dundonian, Craig Garrigan and he sent a pass towards Duncan Speirs, who was headed for goal.

The puck found Speirs as he crashed into the Clan keeper but still the puck ended up in the net and after a lengthy review, the goal was given.

The tensions grew and the game reached several boiling points in the final half of the first stanza.

Zack Fitzgerald’s side continued to have little digs at different Stars players and when Matt Haywood shoved, Dundee netminder, Alex Leclerc, Kris Inglis quickly stepped in to protect his teammate.

However, Brown and Halas seen a foul by Inglis and as well as roughing penalties for the pair, handed the Dundee-born defender another minor penalty for holding.

The resulting powerplay led to a Glasgow goal which left the Stars fans and players in uproar.

Scott Pitt waited out a diving Leclerc before finishing high into the roof of the net after 11 minutes.

The away team gained some momentum from their goal and managed to create a two-on-one breakaway but Jagger Dirk made a professional foul to prevent a clear scoring opportunity.

Luckily for Dirk, his side would not concede again before the first break.

The Stars continued to find ways past the Clan as Reilly O’Connor’s deflected shot made it 4-1 on 27 minutes.

An aggressive Clan then reappeared as the game began to boil over again.

There was a mass scramble in front of the Stars goal and helmets were flying everywhere.

Each team seen three players penalised for roughing, just 15 seconds after the goal and Glasgow went down a skater as Linden Springer picked up a double-minor for roughing.

Nolan LaPorte tried to spark his side as the atmosphere dropped a little, by energising the crowd with a fight.

LaPorte and Inglis dropped the gloves in the 32nd minute and a few punches were landed by LaPorte before the officials stepped in.

Inglis was sent to the dressing room to get stitched up.

The Clan attacks continued as Pufahl, Craig Peacock and Roy ganged up Egils Kalns after he obstructed the path of Glasgow player.

These latest rounds of penalties left Pacha’s team on the powerplay and Dufour would make it 5-1 inside 35 minutes.

Dufour weaved through the defenders before taking a wrist shot whilst still moving around the last defenseman and the puck flew past Killen low on his blocker side.

Matt Stanisz found himself in the box after the goal and after the Glasgow coach had a heated but detailed conversation with the referees.

This next powerplay seen, Pearce take advantage for his second of the game.

The Stars winger finished high into the top corner on Killeen’s near post and that would be the end of his night as Jordan McLaughlin was sent in to replace him.

Two avoidable but unfortunate penalties put Dundee down to three skaters in the last minute of the second period and it was then that LaPorte found a second breakthrough for his side.

The winger deflected Stanisz’s shot and it looped over Leclerc to land in the back of the net.

The third period seen the home team continue to press their opponents, with Drydn Dow clipping the crossbar with his shot in the 41st minute.

Beauregard then grabbed his second of the night and third of the weekend to finish off the scoring at 7-1.

He was played in on goal by Dufour and calmly deked his way around McLaughlin before sliding it easily into the net on 50 minutes,

The scoring was over but what had already been a feisty game was not.

A big check by Dundee’s Egils Kalns in the final two minutes knocked Glasgow’s Craig Moore hard to the ice and that sparked a huge brawl.

It was unclear if Kalns made contact with Moore’s head but he received a five plus game penalty for checking to the head as the Clan team went berserk.

Matt Stanisz ended up being ejected for abuse of an official while Fitzgerald fell into disarray along with all fans.

Moore did eventually get up and left the ice under his own power but a quiet end to the game, along with all the penalties took away from what was a fine display of hockey by Dundee.

Man of the Matches:

Tickets are now on sale for our next HOME game versus Fife Flyers, buy your tickets NOW!