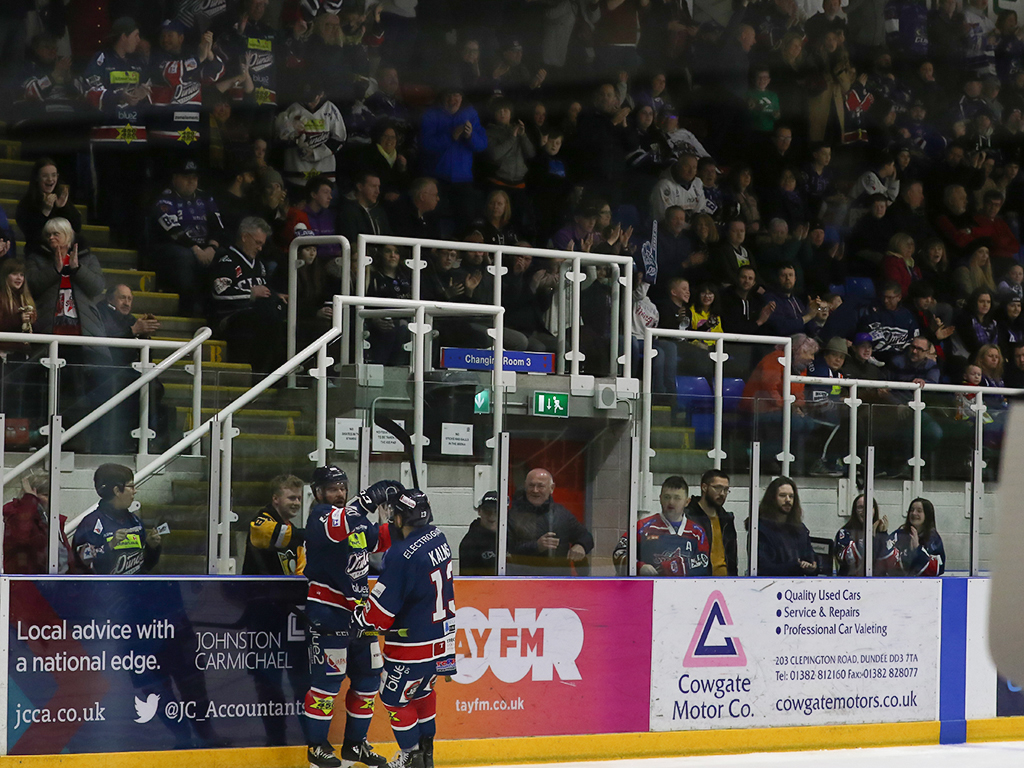 The Kitmart Dundee Stars took on Glasgow Clan on Saturday night at the Dundee Ice Arena,  in what was a crucial playoff battle for both sides.

The first real scoring opportunity fell for Glasgow’s Mathieu Roy and Marcus Jonsson in the third minute, after Dundee goaltender, Alex Leclerc made the initial save  but there was big chance for the two Clan forwards to tap in the rebound.

The loose puck was sitting invitingly in front of the Stars goal but defenseman, Kris Inglis quickly cleared away the danger.

Although, after seven minutes of play, the opening goal was scored by Shawn Boutin, as he put the home side ahead.

The Dundee blueliner received a pass from winger, Egils Kalns that played him in past the two Glasgow defenders.

Botuin then fired a shot back across the body of Patrick Killeen and the puck found its way into the top left corner.

A few moments later, it was nearly 2-0 to the Tayside team as Matt Carter got on the end of a long-stretch pass but sent his shot off the crossbar.

At the other end, the Clan had missed a few chances but continued to allow the Stars to break and that seen Dundee dangerman, Kevin Dufour find some space but he was denied by Killeen.

The first penalty of the night came against Omar Pacha’s men in the 13th minute, as Carter was punished for interfering with his opponents skating path but the Stars easily killed off the two minute minor.

However, there was a scare for Dundee in the 17th minute, as the Clan believed they had scored but an stunning save by Leclerc kept the puck out of the goal.

Craig Peacock had dragged the puck around the Stars keeper and after his first shot struck the post, he fired his second on target but only for Leclerc to reach back and catch with his glove hand.

Dundee were able to defend their narrow lead until the first break and they tired to quickly add to it in the second period when Dufour got forward straight from the restart but the chance was taken away from him.

Then, in the 27th minute, Peacock was denied by the pads of Leclerc after he got clean through into the Dundee end and a few moments later, the Stars doubled their advantage.

Matt Marquardt made it 2-0 as he beat Killeen at his near post with a top corner finish from the left wing in the 30th minute and three minutes after that, the Stars captain netted his second in a similar fashion.

Dundee forward, Brett Stovin had drawn all the Clan players across to the right wing and he lured them in close enough to give Marquardt plenty of space before launching a cross-ice pass that Marquardt sent into the same top corner.

However, just moments after conceding, Zack Fitzgerald’s side finally responded and their first goal of the night was scored by Linden Springer.

Peacock had again dragged possession all the way around the Dundee goal before having his shot saved but Michal Beca touched the rebound out into some space for Springer to rush onto and shoot home into a gaping net on 34 minutes.

The home team were pushing hard to recover their three-goal lead and were handed their first powerplay opportunity when Travis Ehrhardt was sent to the Clan penalty box for cross-checking Dundee’s Jordan Cownie in the 37th minute.

There was no fourth goal for the Stars during that two minutes but it seemed like Colton Kroeker would net their fourth of the evening as he went one-on-one with Killeen in the final minute but the Canadian keeper poked the puck off of Kroeker’s stick before he could get a shot away.

Pacha’s men ended the period with a man advantage after Clan forward, Rasmus Bjerrum picked up an elbowing penalty with 33 seconds left on the clock but again, the Stars could not make use of the powerplay.

Although, the visitors moved back to within one goal after Chad Rau deflected a shot past Leclerc from point blank range inside the 50th minute and the Stars keeper was forced to make a sprawling to deny Mathieu Roy, just seconds after the restart.

Dundee were unable to convert on another powerplay before Glasgow tied the game up after returning to full strength.

Former Star, Mikael Lidhammar had possession directly in front of the Dundee goal but decided to send the puck to out to his right for Scott Pitt to turn in at the back post after 53 minutes.

After the home side killed off a late penalty, the teams were still tied and overtime was required to find a winner.

Straight from the face-off, Dufour burst forward but was again denied by Killeen and what proved to be the deciding moment in the game came in the 64th minute.

The Clan were on the man advantage after Carter was punished for a tripping foul on 62 minutes and that allowed Bjerrum to net the winner for Glasgow with a shot from the middle of the slot.

The extra point has kept Dundee just two points behind both Glasgow and Manchester Storm and the Stars have a chance to catch up as they play Coventry Blaze on the road tomorrow night.