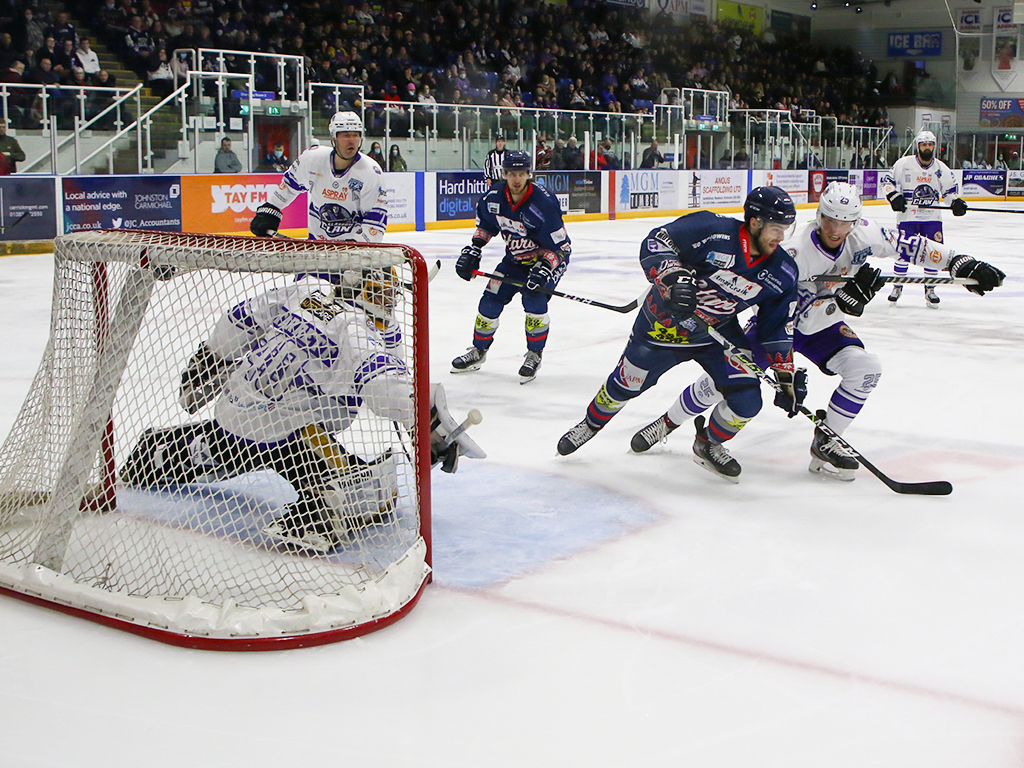 The Kitmart Dundee Stars started their weekend off with an emphatic 5-2 win against Glasgow Clan as they clashed in their first rivalry match this season.

The Stars were only down two players for Saturday night’s game as Kris Inglis and Markus Kankaanperä were missing from the line-up, but forward Alexandre Ranger made his return after seven weeks out.

Dundee then started off the game in their usual dominant fashion and right away, started to test Shane Starrett in the Clan goal.

It only took six minutes for the home side to find the breakthrough and it was via a Charlie Combs goal that has already been labelled as a contender for ‘Goal of the Season’.

The American winger pulled off an elegant spin to dodge a Glasgow defender before taking the puck from the right corner of the Clan zone, straight towards goal and as Combs crossed the front of the net, he snuck his shot past Starrett at the far post.

However, a few minutes later, the score would be tied once again as Malcolm Cameron’s men capitalised on a powerplay in the 11th minute.

Just 22 seconds into Ranger’s penalty for tripping, Colton Yellow Horn received  a pass out wide on the right and sent a first time effort, just through the grasp of Morrison.

Although, Gabriel Desjardins would restore the Stars lead just 15 seconds later, as he was on hand to tap in the rebound of Spencer Dorowicz’s shot.

Omar Pacha’s side from then on remained in control and further extended their lead just before the first break.

Defenseman, Toms Rutkis stepped up to control a misplaced pass and quickly picked out Swedish forward, Sebastian Bengtsson and sent him through on goal, where the winger easily finished past Starrett on 18 minutes.

In the second period,  it was once again Dundee who got another goal on the board.

In the 27th minute, Connor Sills saw his shot slip past the Glasgow goalie before trickling across the line, to make it 4-1.

However, the team from Braehead offered up a swift reply and less than a minute later, Cody Sol sent the puck in off the crossbar with a rocket of a shot from just inside the blueline.

There would still be a two-goal deficit benefiting Dundee heading into the third period, but after a well-disciplined effort from both teams in the second, some final session penalties would prove fatal for the Clan.

The Tayside team were back on top of the game early into the third stanza and were testing Starrett with a range of creative plays.

Yet, it was not until 54th minute that they found the killer goal that ended any hopes of a comeback for the Glaswegians.

A needless hooking foul by Glasgow’s Brock Beukeboom put them a man down with less than eight minutes to play and that powerplay opportunity allowed Timi Lahtinen to net the Stars fifth goal of the night.

After working the puck back and forth, around the Clan defence, Gabriel Desjardins would eventually send in a low driven shot that would be redirected by Lahtinen’s stick and that change of direction was enough to take it past Starrett.

The Stars then saw out the remaining minutes to secure another vital win and pair of points that takes them off the foot of the table and into eighth, ahead of Sunday night’s road game in Cardiff.

The Kitmart Dundee Stars can confirm that forward, Cody Drover has left the club.

The club wishes to thank Cody for all his hard-work and dedication to our team, our fanbase and our city during his short stay in Scotland.

Cody has decided to return back home to Canada for family reasons and everyone at the Stars wishes him and his family well for the future.

Drover made six appearances for the Stars this season, totalling four points (3G, 1A) – which included his first professional goal on his professional debut.