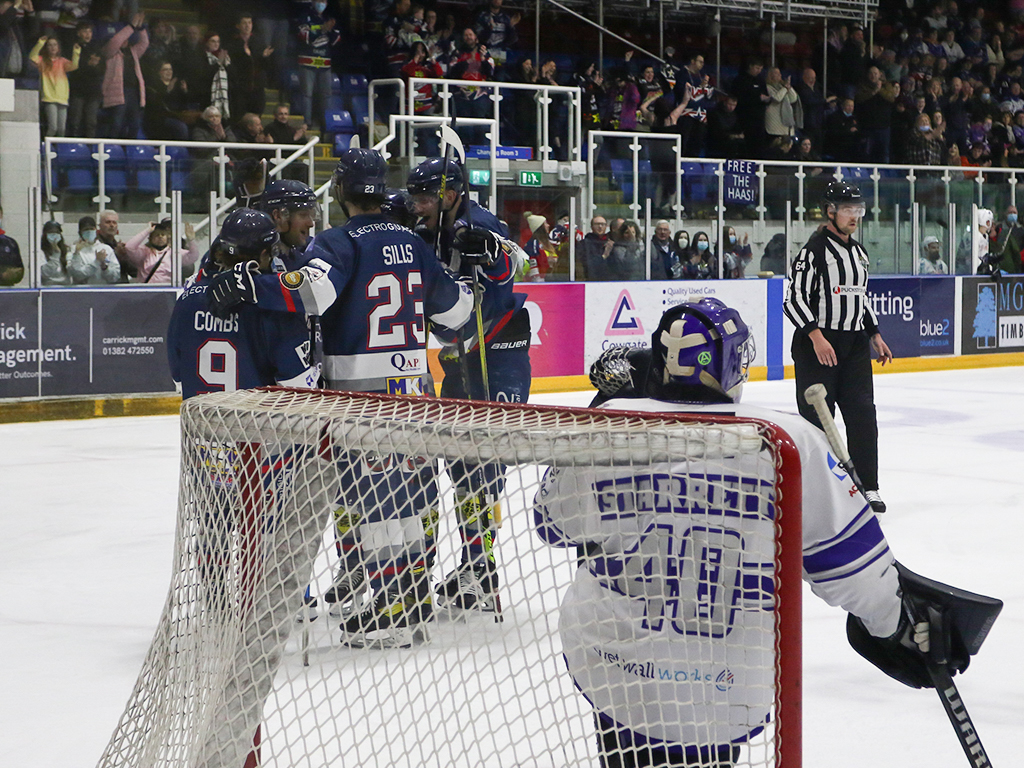 Jordan McLaughlin 60:00
10 Abuse of an Official

The Stars got the perfect start on the night as ex-Clan forward, Quinn O’Brien fired the home team ahead after only three minutes.

Dundee forward, Alexandre Ranger had carried the puck forward through the Glasgow defences and cut a pass back to O’Brien who quickly sent it up and over the shoulder of Shane Starrett.

Although, the Braehead club were not behind for long and on 11 minutes, Mathieu Roy blasted a first-time shot past Brython Preece.

A quick pass out from the left wing by Colton Yellow Horn allowed Roy to quickly turn the puck towards goal, giving the Stars keeper no time to react.

Malcolm Cameron’s side then took the lead on 15 minutes as Braylon Shmyr lifted home the puck after a goalmouth scramble.

Glasgow’s Colin Campbell had put a shot on goal and after making two saves, Preece was then unable to stop Shmyr’s rising effort that hit the roof of the net.

Just as Dundee looked to have lost all momentum, they were handed a late two man advantage as the Clan took two penalties inside the final two minutes.

With a 5-on-3 powerplay, Charlie Combs drew the Stars level with only six seconds left on the clock after he turned in Kalvis Ozols shot that had went wide and sprung out form behind the net.

In the second period, the visitors continued to be punished for their poor discipline and after giving the Stars one too many chances on the powerplay, they eventually re-took the lead.

This time Ozols shot would not miss the net and Latvian’s laser-accurate cannon found the top corner of Starrett’s goal on 35 minutes.

Dundee were still leading by just one goal heading into the third period, but once again would let the lead slip as Colton Yellow Horn slotted home on the powerplay, in the 51st minute.

However, the Stars soon found another gear and the Clan found more ways to take penalties.

With Glasgow accumulating 71 penalty minutes in the final period, the Stars would punish them with three five-on-three powerplay goals.

Ozols would bag his second of the night on 52 minutes with another rocket shot from the blueline and then in the 58th minute, Gabriel Desjardins turned home from point-blank range to make it 5-3.

After that, the Glasgow players lost their head and continued to be frustrated by the penalty calls against them and that resulted in four players being sent for an early shower.

Cody Sol, LaPorte, Roy and Colton Waltz were all sent to the dressing room by referees Pavel Halas and Cameron Fox and Dundee then rubbed some more salt in the wound, as Kyle Haas scored a sixth goal of the night with only six seconds left to play.

Omar Pacha was pleased to see his side get the bounce-back win they needed after heartbreak in Glasgow the night before, but now he must take his side across the Irish Sea for their final encounter with the current league leaders, Belfast Giants.