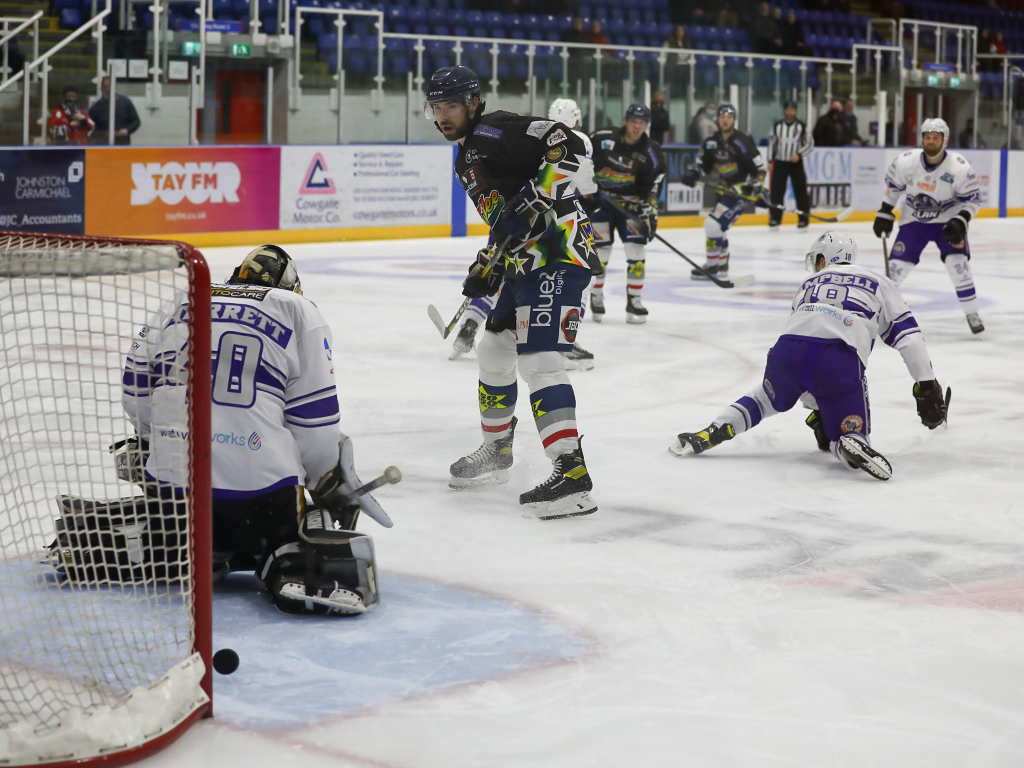 The Kitmart Dundee Stars failed to shut down the Glasgow Clan’s top offensive line and were punished with a 5-3 loss on Saturday night.

Things began well on Pride Night at the DIA for the Stars as they opened the scoring in the sixth minute, whilst on a powerplay, as Glasgow’s Rodney Southam was in the sin bin for an interference foul.

With the puck being moved around quickly by the Stars, Dundee’s Connor Sills was wide open on the left flank and would use that space to rifle home the pass from Sebastian Bengtsson.

However, the home team were not in the lead for long as the Clan then capitalised on a powerplay of their own, after seven minutes of play.

Philippe Sanche had been punished for interfering with Glasgow goaltender, Shane Starrett and that allowed Nolan LaPorte to tuck in the rebound, after Adam Morrison had denied the initial effort from Mathieu Roy.

The Braehead-based club then quickly pounced on another opportunity and took the lead two minutes later.

After winning back possession in Dundee’s end, Colton Yellow Horn quickly skated into the middle of the offensive zone and released a fast and accurate finish that beat the Stars goalie on his blocker side.

Dundee then began to work tirelessly to draw back onto level terms and after testing Starrett with a few more shots, they found their equaliser on 15 minutes.

The Stars converted a turnover into a goal, as they forced the Clan to give up possession at their own blueline and once in behind, Dillon Lawrence sent a pass out from behind the net for Timi Lahtinen to bury into the bottom corner.

The two teams would remain tied going into the first break but when the second period began, it was all Clan.

Four minutes into the middle session, Mathieu Roy netted his first of the night by redirecting the shot of Mitch Jones to send it past Morrison.

Jones would again provide the assist as his long stretch pass unleashed Yellow Horn to break clear of the pack and score with a low shot between the legs of the dropping Stars goalie.

Despite two late penalties being called against the Clan in the second stanza, Dundee would still trail 4-2 going into the third period.

Although, they did make an excellent start to their comeback plans, as Sills also got his second of the match on 44 minutes.

After Starrett failed to hold the original shot from Bengtsson, Alexandre Ranger then sent the puck back underneath the Clan netminder and the waiting Sills just had to push it home.

Omar Pacha’s men were then gifted the chance to make it a 4-4 game straight from the restart as they were awarded a penalty shot, as Liam Stenton impeded the progress of Dundee’s Gabriel Desjardins whilst he was through on goal.

However, the Canadian winger saw his effort saved by the blocker of Starrett as he tried to beat the American keeper down low.

That massive missed opportunity would prove fatal for the Tayside team and the visitors secured the victory in the 52nd minute, when they added their fifth marker.

Roy was the next player to bag his brace as he was lurking high up the ice and took LaPorte’s pass all the way to the net and beat Morrison with a cheeky chipped finish that slipped through the grasp on the Stars shotstopper.

The final buzzer brought the game to an end and afterwards, Stars Head Coach, Pacha was disappointed and frustrated to see his side put in a “very average” performance and felt they “deserved to lose” after being “beat by one line”.

Although, there was no time to dwell as the Canadian coach must regroup his side for Sunday’s home tie against Nottingham Panthers, a team who would be playing their third game in three nights.