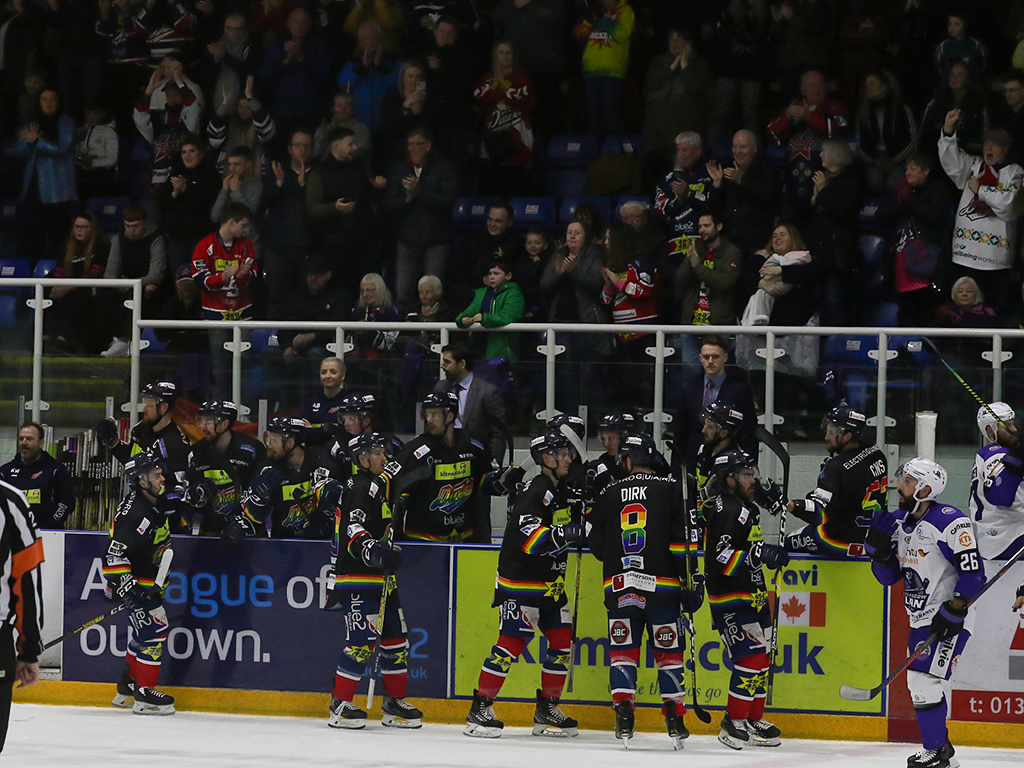 The Kitmart Dundee Stars kicked-off the Elite League’s first ever Pride weekend with a big win against their Scottish rivals, Glasgow Clan.

The Clan made a fast start to the match and attacked the Stars net with pace but ultimately they ended up a man down as, defender Linden Springer ended up in the sin bin after 91 seconds for a tripping foul.

However, Dundee were unable to capitalise on their early powerplay chance and they were left trailing as the visitors opened the scoring on five minutes.

Rookie defenseman, Liam Stenton fired a shot in from the blueline that was blocked in front but the rebound dropped to the left of Alex Leclerc’s goal for Matt Beca to tap in.

Two minutes later, the Clan thought they had scored again but Leclerc had trapped the shot on the outside of his post.

Although, Omar Pacha’s side were given another powerplay when Clan captain, Matt Haywood was sent to the penalty box for slashing in the 9th minute.

Glasgow killed once more and hit the Stars again once they got back to full strength.

Another scramble in front of the Dundee net allowed Nolan LaPorte to push home the loose puck from just inches out.#

The Tayside team looked determined to find a way back into the game and started putting thier bodies on the line.

Craig Gans made a selfless sliding block to knock the puck off of Beca’s stick and that allowed the Stars to break down the ice, where Kevin Dufour held up the play until Anthony Beauregard arrived a released a shot that was only partially saved by Jordan McLaughlin.

The Glasgow goalie had gotten a good chunk of it before the puck dropped into the back of his net, making it 2-1 to the Braehead side after 13 minutes.

The first period concluded with Zack Fitzgerald’s side still in the lead and they were handed a number of chances to increase their lead in the second session as the home team picked up three penalties in the space of three minutes but Dundee saw off any danger.

After three big penalty kills, the Stars gathered some momentum and broke forward in the 30th minute.

Colton Kroeker lead the attack and once in the Clan end, he chipped the puck past the only defender for the chasing, Drydn Dow to smack home past McLaughlin.

The ecstatic atmosphere in the Dundee Ice Arena was quickly killed as another penalty was called but again Dundee were defiant and they restored the buzz with another goal to take the lead on 34 minutes.

The Stars only had possession in the offensive zone for a short period of time before Gans stepped into a loose puck and blasted it straight into the roof of the net from just inside the blueline.

After a few more minor penalties, the Tayside team ended the middle stanza with a powerplay as Beca was punished for delaying the game.

The third period did not begin well for Pacha’s men as they failed to score on the leftover powerplay before handing the Clan one of their own and they would capitalise to tie the game.

A pass from behind the net found Glasgow’s Craig Peacock and he slotted home into a wide-open chunk of net to make it 3-3 in the 45th minute.

However, the road team were back on the kill, as LaPorte committed a tripping foul and the Syats answered back with a powerplay marker of their own.

Dundonian, Jordan Cownie fired a shot in and the puck came to Dufour, who after a few whacks finally got a shot past McLaughlin to resotre their lead after 46 minutes.

Although, Dundee did not want a close finish and decided to put another bit of distance between them and Glasgow.

Brett Stovin made it 5-3 36 seconds later after some good hold up play by Marquardt, the Stars captain then lobbed a pass across into the middle of the ice for Stovin to pick up and from long range, he hit it straight past the Clan netminder.

The home side controlled the rest of the match and after Glasgow used their timeout and put an extra attacker on for their goalie, Matt Carter wrapped up the win with an empty net goal, 62 seconds from time.

Pacha was delighted to claim an important win that sets up his side nicely for their trip to Manchester Storm on Sunday.